The Knesset must not approve the MK Suspension Bill since it will severely weaken Israel’s democratic character. 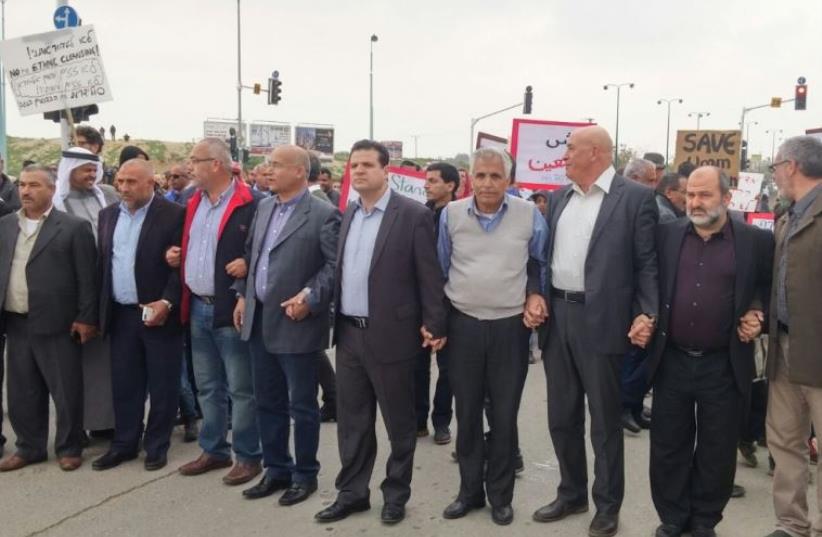 Israeli Arab MKs at protest in Beersheba against planned destruction of illegal unrecognized Beduin villages
(photo credit: JOINT LIST)
Advertisement
Last week, the Knesset Law, Constitution and Justice Committee began deliberating over a proposal that would fundamentally alter the Basic Law – The Knesset: The MK Suspension Bill.If passed, the proposed bill would grant members of Knesset the power to remove another parliamentarian.Even though the proposed law alludes to “suspension,” it is worth noting that the length of suspension could conceivably be until the end of an MK’s term. During this period of suspension, the next person on the list of the suspended parliamentarian would replace him in the Knesset. Accordingly, and as noted by the legal counsel participating in the committee’s meetings, the bill’s proposal is tantamount to expulsion – even though the language of the law avoids using this actual term.According to the proposed legislation, Knesset members would have the authority to expel their colleagues based on the already existing Section 7A of the Basic Law, which outlines criteria for the disqualification of political parties or candidates for elections to the Knesset. These criteria include stated opposition to the existence of Israel as a Jewish and democratic state, incitement of racial hatred, or support for armed struggle or terrorist organizations’ activities against Israel.Incitement to racism and support for terrorism are already considered criminal offenses. Alleged support for terrorism is what triggered the development of the proposal. However, it should be emphasized that there is currently no parliamentary immunity for such offenses and a conviction on the grounds of moral turpitude today would result in the immediate end of a convicted parliamentarian’s term as MK – whether the MK Suspension Bill passes or not.So what’s going on here? With the MK Suspension Bill, the Knesset seeks to transform itself into accuser, investigator, judge and executioner. Instead of respecting the police department’s authority as the primary investigator, the attorney general’s authority as primary decision- maker and finally the courts’ power to convict, the Knesset is effectively attempting to replace the entire law enforcement system.If approved, the MK Suspension Bill would enable Knesset members to determine by a vote of 90 or more, taken within a political forum, the guilt of a fellow parliamentarian on one of the phrases stated in Section 7A.The Knesset is a political body that does not have the legal expertise to establish facts and draw legal conclusions. Neither does it have the resources to interrogate witnesses, hear evidence and assess them. In addition, MKs will inevitably allow populist political and electoral considerations to influence their decisions.Some Knesset members will simply be unable to judge other members impartially. After all, these same Knesset members will have gone on record dozens of times with accusations that several of their colleagues in parliament are inciting terrorism and supporting the destruction of Israel. Some MKs who are tasked with assuming the role of judge, jury and executioner will have previously promised their constituents that they will do everything in their power to expel certain parliamentarians.We must not give Israeli MKs the power to turn Israel’s democracy into a laughingstock by enabling them to expel their duly elected colleagues. This would be a critical blow to the Israeli public’s freedom to elect and be elected, since some of the charges would be based on little more than expressed opinions. And yes, the MK Suspension Bill would also harm Israeli citizens’ freedom of expression.Attempts to defend this bill by comparing it to legislation already on the books in other countries denotes a lack of understanding as to how different forms of government use different available legal tools to cope with similar issues.Research conducted for the Knesset has shown that there is no other country where parliamentarians have the power to remove other members of parliament based on specific charges.It should be noted that in several countries that don’t have an automatic removal process following a conviction on the charge of moral turpitude, a more general charge of misconduct, usually applied after either an indictment or conviction, is used.The Knesset must not approve the MK Suspension Bill since it will severely weaken Israel’s democratic character.The author heads the Israel Democracy Institute’s Defending Democratic Values program.