Mr. President, we are counting on you!

Stopping Iran from getting nuclear weapons is not only critical for Israel’s safety and survival, but for the future of the world. 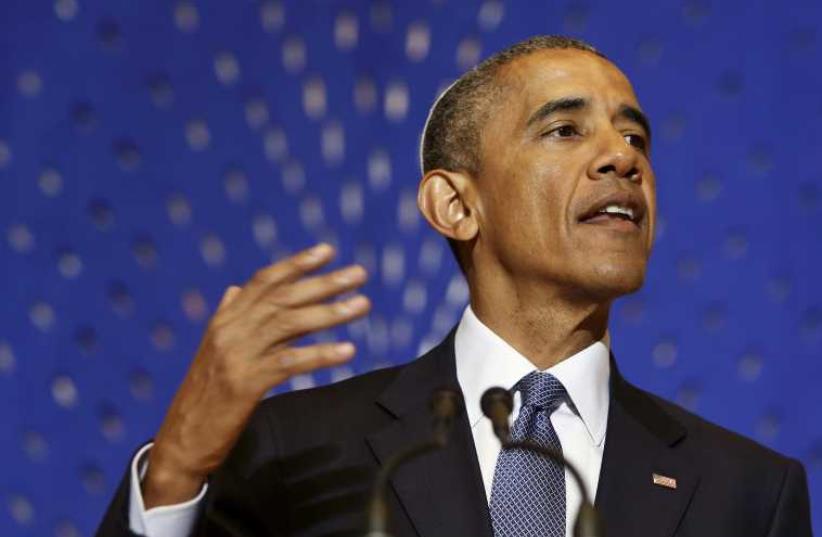 US President Barack Obama delivers remarks on Jewish American History Month at the Adas Israel Congregation synagogue in Washington May 22, 2015.
(photo credit: REUTERS / JONATHAN ERNST)
Advertisement
For 2,000 years the Jewish people were politically and military dead. We were the wanderers of history. We had no homeland, no sovereignty, no security. Our fate was determined by the contingencies of history and the whims of rulers and despots in many lands over many centuries.With the establishment of the State of Israel and the return of the Jewish people to our ancestral homeland, we could once again control our fate.Finally, after 2,000 years, we could defend ourselves and be the masters over our own future.But all of that would be put in jeopardy in an instant if Iran were allowed to develop a nuclear bomb. Israel’s safety and future would no longer rest in the hands of its people or its military.
See the latest opinion pieces on our page
There are those who downplay the Iranian threat. They argue that even if Iran gets the bomb, the mullahs and leaders of Iran are rational actors and would not use the bomb, but merely possess it.The issue is not whether the ayatollahs and mullahs are rational. History has taught us that rationality is no guarantee for the absence of evil.When the mantra of Iran’s leaders is “Death to America” and that the destruction of Israel is “non-negotiable,” I take them at their word. I am not willing to risk the future of the Jewish people and the Jewish state on the so-called rationality of an enemy who is sworn to the destruction of my people and the way of life of the free world.After all, let’s understand who these people are. They are the same people who sent their own children by the thousands into battle in the Iran-Iraq war. They are the same people who hang homosexuals in public squares.They are the same people who jail journalists. They are the same rulers who sponsor terrorism around the world. They are the same leaders who call for the destruction of Israel and death of America. They are the same leaders who have projected Iran’s hegemony in four Middle East capitals and have the desire to undermine other regimes in the region. And they are the same leaders who have made Iran’s nuclear program and military build-up a national priority over the welfare of their own people.Iran’s mere possession of the bomb will embolden it to wreak havoc in the Middle East and around the world.Stopping Iran from getting nuclear weapons is not only critical for Israel’s safety and survival, but for the future of the world.I support US President Barack Obama’s desire to seek a diplomatic path and find a peaceful solution. But it is imperative that the president not sign off on a deal that would leave any room for error. Iran has a track record of cheating and duplicity. If Iran is able to break out and produce a bomb it will be too late for Israel, too late for the United States and too late for the world.Therefore, any deal with Iran must guarantee full and unfettered inspections to all sites, including military sites anytime and anywhere. Iran’s ability to advance its nuclear program must not simply be mothballed, but irreversibly dismantled, including but not limited to its nuclear stockpile of fissile material, the dismantling of its heavy water reactor and the destruction of its advanced centrifuges. Only in this way will Iran not be able to cheat.In order to hold Iran to its commitments and to insure compliance, sanctions relief needs to occur not precipitously but gradually. And finally, any deal with Iran must last not years, but decades. In the life of nations, 10 or even 20 years is but a blip on the stage of history.The president and US Secretary of State John Kerry have said time and again that the US will not enter into a “bad deal.” Yet any deal that does not close every possible loophole in Iran’s quest for nuclear weapons is a bad deal. The stakes are too great and too dangerous for the US to settle for anything less.The safety and future of the world must be non-negotiable. Mr. President, the Jewish people are counting on you. The State of Israel is counting on you. Future generations of Americans are counting on you. The world is counting on you.The author is the president of the Rabbinical Assembly, the international association of Conservative and Masorti rabbis.