Unlike most synagogue inaugurations, this one was notably subdued, almost somber. The crowd spoke in hushed tones, no loud talking or laughter to be heard. 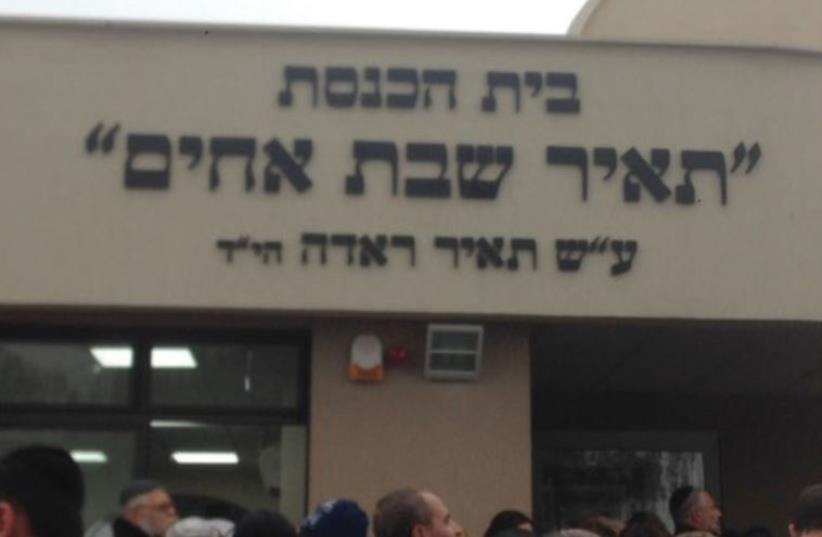 KATZRIN RESIDENTS dedicate a new synagogue in memory of Tair Rada last week.
(photo credit: SUSIE WEISS)
Advertisement
If ever there was a case of mixed emotions, this was it.We stood in the light rain, hundreds strong, awaiting the dedication of Katzrin’s newest synagogue, Tair Shevet Achim, in memory of Tair Rada, who was murdered 10 years earlier at the age of 13.Unlike most synagogue inaugurations, this one was notably subdued, almost somber. The crowd spoke in hushed tones, no loud talking or laughter to be heard.Slowly, an ambulance pulled into the courtyard; the crowd went silent, and everyone was asked to refrain for a moment from taking pictures. The doors opened and two paramedics wheeled Shmuel Rada, Tair’s father, into the heart of the assemblage.Terminally ill, he was pale and gaunt, wearing an oxygen mask and a large kippa. He watched silently as a mezuza was affixed to the front door, and then as the bunting was removed from the building’s facade, revealing the name that forever memorialized his daughter.I looked around at the conflicted faces, and – almost instinctively, as the opening of any synagogue is meant to be a joyous occasion – I began to lightly sing “Siman Tov- Mazal Tov.” The Chabad rabbi next to me joined in, as did others, and then a Sephardic tune was started.With that, Shmuel smiled from behind his mask and joined along in the song. He would later tell the waiting press that he had sworn to stay alive to see this day and to pray, at least once, in a holy place that honored his Tair.Shmuel Rada died the next morning, one day shy of his 60th birthday.It was just the latest torturous and tragic twist in a compelling case that has captivated the Israeli public for a decade.The body of 13-year-old eighth-grader Tair Rada, a strikingly beautiful, gentle girl, was found in a bathroom stall at the Nofei Golan school in Katzrin on December 6, 2006, with slashes to her neck, stab wounds across her body, and severe blows to her head. Two suspects were arrested in the days that followed, and then released.Roman Zadorov, a Russian immigrant who had worked at the school, was arrested a week after the murder, and, after being interrogated for six days, confessed to the killing and recreated it. During that period, he also confessed to the murder in front of an undercover informant who had been put into his cell.The police held a press conference in which they announced that the case was solved, but Zadorov recanted his confession less than a day later. His attorneys claimed that he confessed under duress, and that the “unique” details he confessed to – details that only the killer would know – were “fed” to Zadorov by his interrogators. Already, shadows were forming over what had appeared to be an open and shut case.Zadorov’s first trial began in January 2007, with more than 120 witnesses giving their testimony during its proceedings. Thousands of documents and other pieces of evidence were submitted. In the end, Zadorov was convicted unanimously by the three judges, a conviction later upheld upon appeal.But serious questions were still being asked, particularly regarding the forensic evidence presented at the trial: The bloody footprints at the scene of the murder were shown not to be those of Zadorov, and no murder weapon was ever found. And so last month, nine years after Zadorov was sentenced to life imprisonment, plus two years for obstruction of justice, the case went before a three-judge panel of the Supreme Court. Justice Yoram Danziger, who headed the panel, argued for dismissal of all charges, on grounds that there was reasonable doubt that Zadorov was the killer. But Danziger was overruled by his fellow judges, Isaac Amit and Zvi Zylbertal, who affirmed the previous guilty verdicts, sending Zadorov back to prison for what likely will be the rest of his life – there is little chance the full Supreme Court will agree to reopen his case.Zadorov’s wife, Olga, was adamant in proclaiming that her husband was innocent. “The lives of two families – not just one – have been ruined today,” she told reporters, “because now no one will look for the real murderer.”Astonishingly, Tair’s mother, Ilana, agreed with Olga, supporting the view that the police work in the case was faulty, and that Zadorov was wrongly convicted. “I came feeling that the justices would look at things differently,” she said bitterly. “I will continue to pursue Tair’s killers until my dying day. I still doubt that he’s the murderer.And since one justice left the window open to him being not guilty, we still have where to look.”The wound remains open, the scars do not heal. The residents of Katzrin, traumatized still by this horrendous act of brutality in their quiet, pastoral community, are divided in their opinions as to whether the right person was convicted, and whether the full truth of what happened on that terrible winter day has been established.But one thing they all certainly will agree upon: The spirit of Tair will accompany all their heartfelt prayers for justice, closure and peace in the synagogue which now bears her name.