My people was a rolling stone

Monty Python: “And now, for something completely different...” 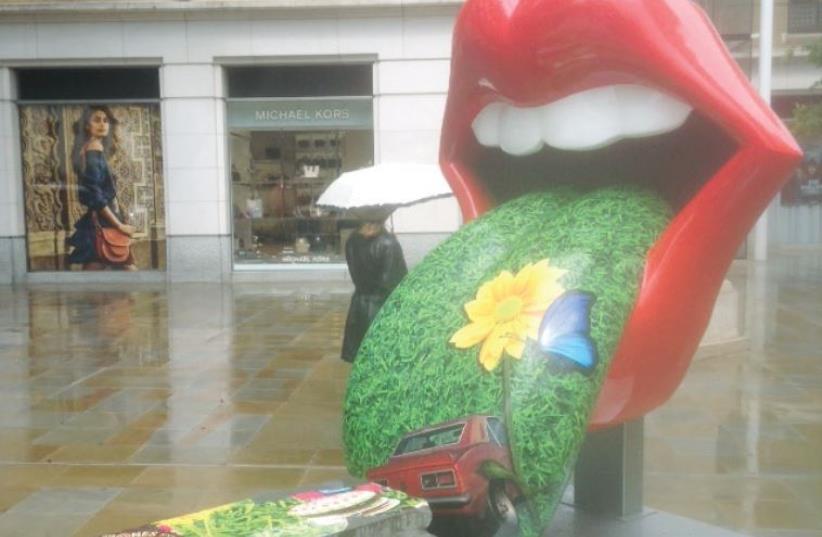 The iconic Rolling Stones logo outside the Saatchi Gallery in London.
(photo credit: STEWART WEISS)
Advertisement
Among the many sights and sounds experienced during a recent trip to the UK was the extensive exhibit of the Rolling Stones – aptly titled “Exhibitionism” – showing at the trendy Saatchi Gallery in Chelsea. The exhibit features never-before-seen dressing- room and backstage paraphernalia; rare instruments; original stage designs, performance costumes, rare audio tracks and video footage; personal diaries; poster and album-cover artwork; and unique cinematic experiences celebrating an unparalleled musical career.Beginning as a London blues band in the early 1960s, the Stones went on to become cultural icons, playing to millions in concert and selling more than 200 million records. Unlike the Beatles – whose career lasted less than a decade – the Stones are legendary for their longevity. They continue to play today – their first concert in Israel was in 2014, their latest appearance was in Cuba four months ago – and group leaders Mick Jagger (a great-grandfather, now expecting his eighth child) and Keith Richards show no sign of letting up anytime soon.The Stones were heavily influenced by Chicago blues, particularly black performers like Muddy Waters, Buddy Guy and Chuck Berry (who wrote their first single, “Come On”). The black community, always in the vanguard of anti-establishment culture, set the trend in both modern clothing – think leather and outrageous jewelry – and music, which takes on a raucous and defiant tone.The Stones immediately picked up on this in-your-face, dare-to-be-different approach; it permeates their music and is arguably the primary source of their ongoing popularity, particularly among young people – of every age.The iconic Stones logo – the large, outlandish tongue, bursting forth in living color for all to see – epitomizes the group’s mission to musically “stick out its tongue” at the powers that be.AS A CHILD of the ’60s – who grew up in Chicago, no less – I can’t help but relate to blues and rock ’n’ roll. But there is – you guessed it – a Jewish angle to the Stones’ message as well. Not only because some of their more famous songs – “(I Can’t Get No) Satisfaction,” “19th Nervous Breakdown” and “Always Suffering,” to name just a few – might perfectly describe classic Jewish angst and anxiety, but for a much deeper reason.We Jews also have a deep-rooted sense of going against the grain, defying the establishment and daring to break through the walls of society’s status quo when we feel those walls are in heavy need of repair and reconstruction.The very first Jew, Abraham, dramatically demonstrated this quality when he broke his father’s idols, smashing into smithereens the universally held belief in idolatry, daring to suggest that one God, and not many, guided the world’s destiny. Moses, for his part, was also quite the rebel. Turning his back on the cushy luxury of the palace, he struck out – literally – against the enslavement of others and taught humankind that morality, rather than might, and Divine decree, rather than dictatorship, were the source of true power and leadership.Modern-day Israel follows in these very same audacious footsteps.By daring to recreate our ancient nation in our ancestral homeland – an act unparalleled in history – we defied all the naysayers, all the critics who said it couldn’t – and shouldn’t – be done. By declaring a decidedly Jewish state, we shocked to its very core the Christian Church, which struggled, and continues to struggle, to accept us as a living symbol of actual “resurrection.”By staking out our place in the Middle East and refusing to budge, we defy the Arab tyrants who believe that only Muslims are allowed to exist in this corner of the world. And by battling terrorism in all its forms – starting long before the world at large, which is now, grudgingly, being forced to join the battle – we demonstrate that we are in the forefront of identifying evil and setting the world’s moral agenda.For 20 centuries, we sojourned through the world like a rolling stone, going through a continuous, calamitous pattern of settling, succeeding and separating from one country after another. All along the way, we were ravaged by pogroms, assimilation and rabid anti-Semitism. Our theme song could certainly have been “Gimme Shelter.”But despite the adversity we faced – or perhaps because of it! – we did not give in. We refused to capitulate. We hung on tenaciously to our traditions, to our Torah, to our determination to eventually and finally reclaim our homeland and establish our rightful place among the nations. We defied the odds that were stacked against us. We dismissed our detractors and proved our critics wrong.OUR PAST history may certainly have been summed up by a favorite Stones’ tune, “We’re 2000 Light Years from Home.” But – God be blessed and world be damned, if necessary – the stone has finally stopped rolling. At long last, we are home, once again and forever. The writer is director of the Jewish Outreach Center of Ra'anana and member of the Ra'anana city council; jocmtv@ netvision.net.il.