That’s the moral I drew from the news reports to which agitated supporters of Israel abroad drew my attention last week. 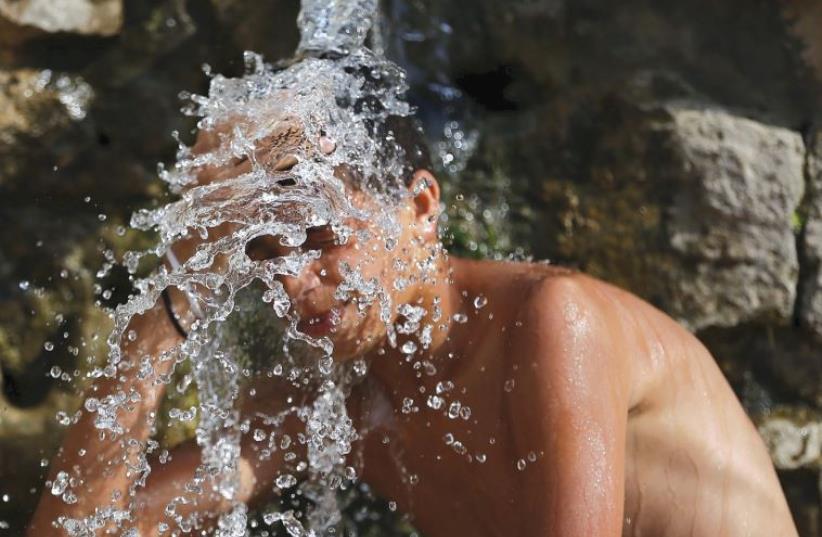 PALESTINIAN YOUTH takes a shower at a natural spring near Beit Jala, south of Jerusalem, on a hot day last summer
(photo credit: REUTERS/AMMAR AWAD)
Advertisement
Still waters run deep. Blood libels run deeper.That’s the moral I drew from the news reports to which agitated supporters of Israel abroad drew my attention last week. It started when a friend in England pointed out the headline of a story by Peter Yeung in The Independent shamelessly declaring “Ramadan 2016: Israel ‘cuts off water supply to West Bank’ during Muslim holy month.”Accompanied inexplicably by a file photo of Palestinians in Gaza filling bottles of water, the report – no, make that “the story” – starts out: “Israel has cut off the water supply to large areas of the West Bank, Palestinian authorities have claimed.“Tens of thousands of Palestinians have reportedly been left without access to safe drinking water during the Islamic holy month of Ramadan, a period of fasting, at a time when temperatures can exceed 35C.”The source of the item was apparently Al Jazeera.According to Yeung’s story – no, make that “narrative” – “Ayman Rabi, the executive director of the Palestinian Hydrology Group, told Al Jazeera that in some areas people had not received water for more than 40 days.”One drop at a time, the libel made its way around the world. I heard Rabi repeat his tale of woe on a June 16 Radio New Zealand news broadcast headlined “Tens of thousands of Palestinians have been left without safe drinking water during the holy month of Ramadan.”

The Independent later carried a response from Israeli authorities noting that the shortages were due to a quickly fixed burst pipe but obviously didn’t want it to drown out the effect of that click-bait headline. Israel’s ambassador in New Zealand issued a statement on Facebook noting that because of the increased demand in the summer, the supply has been raised, not cut.On Tuesday, incidentally, my Facebook feed was subjected to a trickle of complaints by friends living in Jewish communities noting that they hadn’t got water. But that barely made the local news. The Palestinian version grabbed international attention by being so slanted it was basically upside down.The story of the deliberate water cuts (that weren’t) soon morphed into something even more sinister. As The Jerusalem Post’s Lahav Harkov noted on Tuesday, “The Palestinian Authority’s Foreign Ministry revived the well-worn blood libel of Jews poisoning wells this week.”The PA’s Foreign Ministry released a statement on Sunday citing a supposed ruling by a “Rabbi Mlmad” authorizing Israelis to poison Palestinian wells.The official PA website called the supposed ruling a crime against humanity, and said Israel is fully responsible for it and should arrest the rabbi for incitement.“What is the international community waiting for to interfere – the death of thousands of Palestinians of thirst?” the statement reads.The Post was unable to find evidence that the rabbis or the Council of Rabbis in West Bank settlements cited by the PA exist, but PA head Mahmoud Abbas repeated the story at the European Parliament on Thursday.The extent of the latest version of the blood libel resting on lies about water discrimination and stolen waters has been noted by several Israeli groups, including Honest Reporting and NGO Monitor, which updated its in-depth study of the subject in March.A former environment reporter, I find it particularly tragic given that Israel’s expertise in water management and desalination was always considered a key factor in plans for peace. In 1994, I covered Israel’s participation in the multilateral talks on water in the Sultanate of Oman within the framework of the Madrid peace process. (The Palestinians were part of the Jordan delegation.) One of the main achievements, apart from being allowed to enter a Gulf state on Israeli passports, was the consensus around an Israeli proposal for a project to prevent leakage from water pipelines.It might seem like a drop in the ocean, but according to the assessments at the time, from 20 percent to as much as 60 percent of the water is lost that way.The topic arose again later that year when I reported from the peace talks with Jordan. In an air-conditioned tent in the desert at Ein Avrona, Prof. Elyakim Rubinstein, the head of the Israeli delegation, said in his opening statement: “Water is the lifeline of every human being. The God-given rainwater and the Yarmuk and Jordan river waters will not be enough for both of us, before or after allocations are agreed upon.We must develop, in addition, through desalination, new resources; we must also work toward maximizing the availability of existing water, which must be saved.” I was also present at the initialing of the Oslo Accords in September 1993, but later saw the Palestinians stall on many programs that could both have provided water for irrigation and prevented pollution.As politics goes, it doesn’t get much dirtier than the Palestinian Authority deliberately letting untreated sewage flow into water sources because it is reluctant to cooperate with Israel in building wastewater treatment plants, even though the funds and framework exist. Apparently, the PA considers normalization of relations with Israel more dangerous than any health hazards presented by the pollution and drilling of piratical wells.In an extensive study published in 2012 by the Begin-Sadat Center for Strategic Studies, hydrologist Prof. Haim Gvirtzman notes that, thanks to Israeli efforts, “In comparison to [their] Arab neighbors, the Palestinians in Judea and Samaria now enjoy much better access to running water.” That was before the civil war in Syria compounded the infrastructure problems there and sent a flow of more than half a million refugees into water-strapped Jordan.Faced with the latest libel, several friends were reminded of the periodic “dam lies” that one wit termed “a flood libel.” For example, in February, news outlets around the world reported that Israel had deliberately opened the gates to dams bordering Gaza, flooding villages and leaving scores homeless.Israeli officials swiftly pointed out that there are no dams in the area. Israel’s water company, Mekorot, has in the past answered pleas by the UN to provide Gaza with heavy-duty pumps to help it deal with the flooding. Ironically, the Dutch water company Vitens cut off contacts with Mekorot for alleged violation of international law for operating beyond the 1949 lines.The Palestinian stories don’t hold water. But Israel is being made to pay hell. Since the Middle Ages, many, many Jewish lives have been lost in pogroms and attacks following false claims of Jews poisoning the wells. The Palestinians will not die of either thirst or poisoned waters. But lives are already being lost by poisoned minds.