Myths and facts from on the ground in Israel 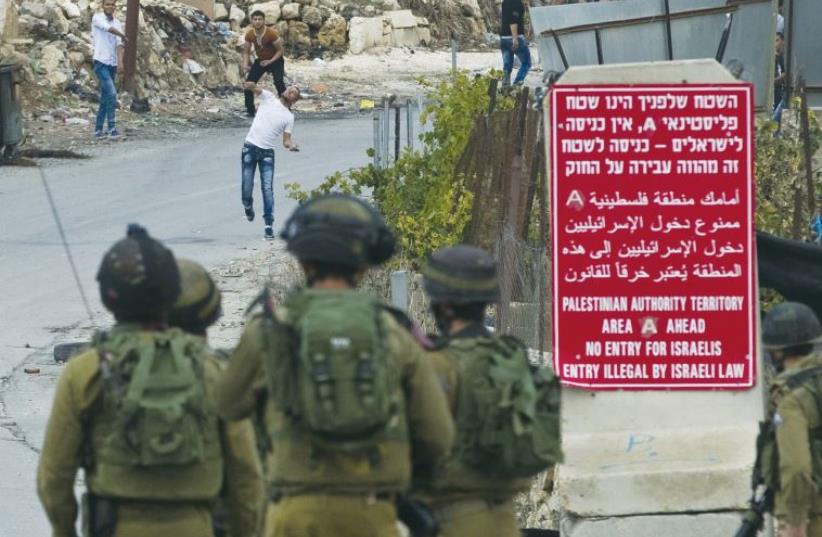 A Palestinian youth throws a stone during clashes with Israeli soldiers next to the scene of a stabbing attack near Hebron on October 26
(photo credit: REUTERS)
Advertisement
In recent weeks, a spate of violent lone wolf knife attacks have plagued Israel and left both Israelis and Palestinians on edge. The attacks have predominantly been carried out by young Palestinian men between the ages of 13 and 20, who’ve been radicalized by Hamas’s extremist ideology.Recently, we had the opportunity to participate in a bipartisan congressional delegation to Israel where we witnessed the violence and turmoil on the ground. Just 10 minutes after we departed from touring Hebron, a Palestinian terrorist stabbed an IDF soldier, wounding him, before being shot.Sadly, such shocking scenes are becoming more frequent as Israel has seen a dramatic escalation of violence spilling into predominately tourist areas. The soldiers stationed at Hebron are there to protect civilians and tourists traveling through the area, not for any military activities.The terrorist actions carried out by individuals affiliated with Hamas have no place in the civilized world. Seeing the level of security needed and the imminent risk of stabbings and suicide bombing attacks was truly eye opening. Soldiers patrolling the streets at all hours of the day and night, equipped with semi-automatic weapons, has become the norm for Israeli citizens.One of the primary reasons for the spike in violence is the repudiated social media assertion that the Israeli government plans to restrict Palestinian access to al-Aksa Mosque – a myth that has widely been denounced by Israeli officials and one not supported by facts on the ground during our visit.Considering the threat level, the IDF has shown a great deal of restraint in dealing with the current wave of terrorism. Despite the uptick in violence, Israel has not sealed off the West Bank, nor has it barred the more than 150,000 Palestinian workers who live in the West Bank from traveling to work in Israel.During our trip, we met with Prime Minister Benjamin Netanyahu, Defense Minister Moshe Ya’alon and MKs. Each of them expressed their deep concern over the escalation in violence in recent months spilling over into civilian-dominant regions.But all expressed their deep commitment to working toward a peaceful solution.There is a deep desire among the Israeli people to coexist with their Arab neighbors and to live in peace and shared prosperity.Currently, the Israeli government is operating hospitals along the Syrian border. Those don’t exist to serve Israelis but to serve their neighbors who have come into harm’s way during the conflict in Syria. This is only one example of the many ways the Israeli government seeks to peacefully coexist within the Middle East.In order to move forward, the PA must acknowledge Israeli statehood and denounce the rampant Hamas-led violence against Jews. The US, as well as the world community – particularly the UN – has a duty to speak out against the terrorism that is plaguing the streets of Israel. No long-term peace can be achieved without two willing parties. The Israeli government is willing to work toward a long term solution.It’s time the Palestinian Authority denounces Hamas’s terrorist activities and moves forward in pursuit of peace.Lowenthal has represented California’s 47th Congressional District since 2013. He sits on the Foreign Affairs and the Natural Resources committees. Meadows has represented North Carolina’s 11th Congressional District since 2013. He sits on the Foreign Affairs, the Oversight and Government Reform, and the Transportation committees.