The truth is that Rabin was last prime minister of Israel who did not support Palestinian statehood. He talked about “a Palestinian entity which is less than state.” 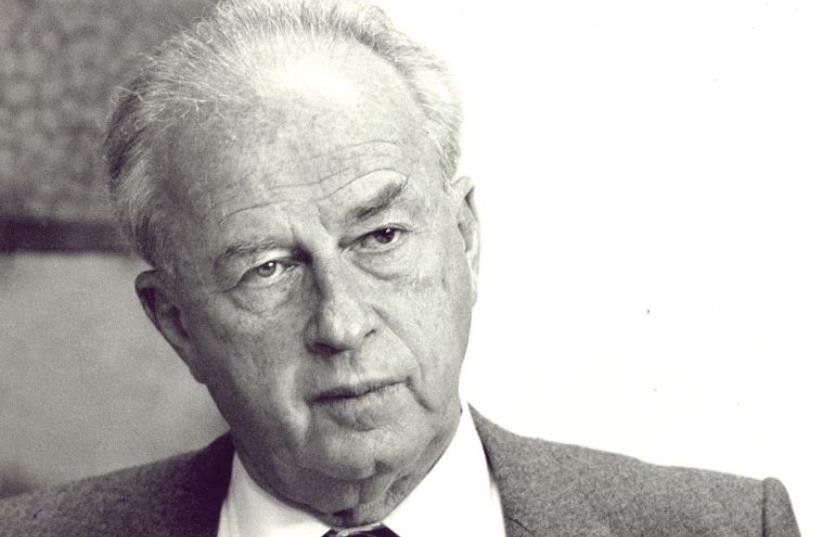 Yitzhak Rabin in 1985, then defense minister
(photo credit: DAVID BRAUNER)
Advertisement
Twenty years ago, prime minister Yitzhak Rabin was assassinated by a Jewish extremist named Yigal Amir, just because Rabin wanted to make peace with Palestinians. Immediately after this tragic event, many Rabin myths were created.Those myths have since expanded; the Rabin they describe never existed.Among the biggest Rabin myths is that he was the only Israeli leader able to end the Israeli-Palestinian conflict – or more precisely, that if he had not been murdered there would be a peace agreement.Another misleading legend is that Rabin was a blind peacemaker. The first myth is cultivated mostly by many Western leaders and by a huge segment of the Israeli Left. The second is typical of a hawkish part of the Israeli Right.When it comes to the first myth, no resolution of the Israeli-Palestinian conflict has ever been in sight, and this is not due to Rabin’s assassination. The first myth ignores the fact that the Oslo process continued and several agreements were signed after his murder.Important to emphasize is that two other prime ministers, Ehud Barak and Ehud Olmert, presented peace proposals – each more generous than Rabin’s (see below) – which offered to withdraw from 97 percent of the West Bank, dismantle many isolated settlements, reparations for some Palestinian refugees and Arab neighborhoods of east Jerusalem as the capital of the new state. Unfortunately, both offers for a Palestinian state were rejected.In Barak’s case, Yasser Arafat refused the peace plan and instead launched the second intifada that caused the death of more than a thousand Israelis. Arafat’s move fits perfectly the pattern of Palestinian rejection of numerous opportunities to create an independent state via diplomacy.Palestinians will always oppose a peace agreement with Israel regardless of who the prime minister is. The reason is that Palestinians perceive Israel as a temporary, imperial and colonial entity doomed to cease to exist. Just like the Crusader states. They believe that time is on their side and thus no compromise to end the conflict is needed.The history of the negotiations also reveals that the Rabin-supported “land for peace” paradigm does not work out with the Palestinians.Any compromise by Israel is viewed by Palestinians as demonstrating weakness.Any concessions only encourage more violence.For example, prime minister Ariel Sharon dismantled all Gush Katif settlements in the Gaza Strip in 2005 – something unthinkable for Rabin – and since then, more than 17,000 rockets have been fired at Israeli civilians from Hamas-controlled Gaza.The Oslo process was an illusion. Israelis who believe it could have led to a real peace with Palestinians suffer from wishful thinking.Simply put, the key reason for the failure of two decades of peace negotiations is the Palestinians’ refusal to accept Israel’s right to exist, let alone to recognize Israel as a Jewish state. And Yitzhak Rabin could not have done anything about that.As for the second myth, Rabin was simply not a blind peacemaker. For most of his public life, he was known more as Israel’s primary “bitchonist,” consistently emphasizing security issues, than as a messianic peacenik.Take for example his last Knesset speech, delivered exactly one month before his assassination.The truth is that Rabin was last prime minister of Israel who did not support Palestinian statehood.Rabin talked about “a Palestinian entity which is less than state.”Rabin refused to return to pre-1967 lines. He declared that “the borders of the State of Israel, during the permanent solution, will be beyond the lines which existed before the Six Day War.”It is important to mention that Rabin wanted to keep the Jordan Valley under the Israeli control. He said: “The security border of the State of Israel will be located in the Jordan Valley, in the broadest meaning of that term,” which means the inclusion of the eastern slopes of the West Bank hills.Rabin also mentioned that all settlements would remain intact before signing a final agreement with the Palestinians. Rabin never specified that Israel would have to compensate for the settlement blocs in the West Bank with “land swaps.”Moreover, in his vision for the future of Israel, Jerusalem is united, includes both Ma’ale Adumim and Givat Ze’ev and is the capital of Israel. One can only guess how the current US president would react.Although Rabin was willing to take risks and negotiate with Arafat, he remained cautious and skeptical.Rabin did not plan to be the first Israeli prime minister to shake the hand of the head of the PLO. Clear misgivings are visible in Rabin’s hesitation to shake Arafat’s hand on the White House lawn in September 1993.Rabin was having grave doubts from the very begging of the process. In June 1993, he even sent an official letter to Shimon Peres, who was foreign minister at the time, and asked Peres to stop the talks. He later changed his mind.One month before the Oslo agreement was signed, Rabin found out that the draft did not include a clear repudiation of terrorism and required correction.He eventually settled for a vague statement, but was not satisfied with the outcome.Rabin’s doubts were known to some of his relatives and confidants. His daughter, Dalia Rabin, said in 2010 that “many people who were close to father told me that on the eve of the murder he considered stopping the Oslo process because of terror that was running rampant in the streets ... Arafat was not delivering on his promises.”Defense Minister Moshe Ya’alon, who in 1995 was chief of IDF military intelligence, was told by Rabin that after the next election, he intended to “set things straight” with the Oslo process, because “Arafat could no longer be trusted.”Arafat was a congenital liar and was sabotaging the peace process by funding and encouraging terrorist attacks and embracing of terrorists as “martyrs.” The suicide bombings of 1996 could have marked a turning point in Rabin’s mind.We will never know.As long as Rabin’s myths exist, it will be impossible to move forward. The fabricated Rabin needs to be separated from the historical Rabin.

The author is a PhD student at Masaryk University in Brno. He holds MAs in political science and security and strategic studies from the same university. He is currently an intern at Jerusalem Center for Public Affairs.
Advertisement
Subscribe for our daily newsletter