Nearing its 70th anniversary, Israel knows the best and worst of times

Best of times? Worst of times? For Israel, nearing its 70th anniversary, it is both at the same time. 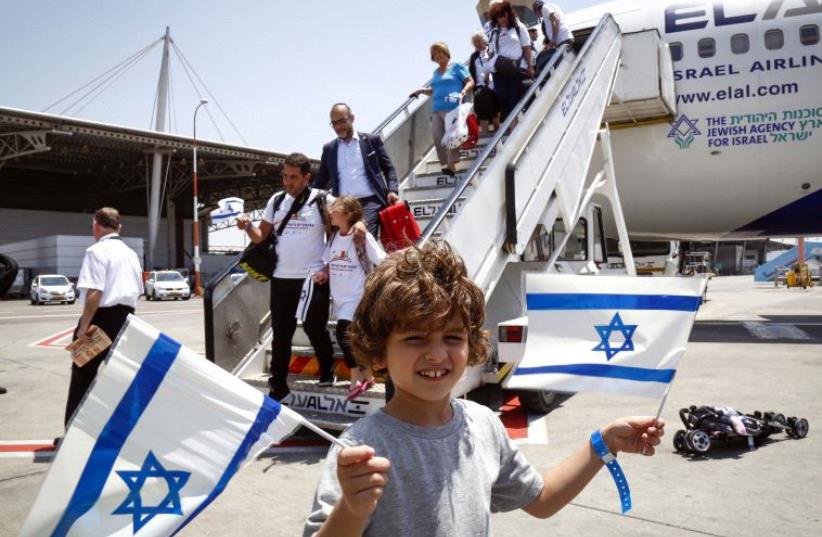 New Olim arriving to Israel.
(photo credit: JEWISH AGENCY)
Advertisement
As Israel approaches the 70th anniversary of its creation by United Nations Resolution 181 in November 1947, it faces serious threats to its existence and at the same time enjoys outstanding accomplishments.Iran continues to threaten to destroy Israel. With Iranian missile bases 11 minutes’ flight time from Israel and only four main targets (Haifa, Tel Aviv, Beersheba and Jerusalem), the threat is real and omnipresent. Recently, Iran has fired off a dozen missiles and likely, despite the recent agreement with the West, continues to develop nuclear weapons.This danger is reinforced by the small size of Israel and fact that 58% of the land is largely desert. This leaves only 8,800 sq.km. of living space, less than one thousandth (1/1,000) the size of the United States, for over 90% of Israel’s 8.5 million people.There is also the threat of an Iranian semi-encirclement of Israel by a Shi’ite Crescent of Lebanon, Syria, Iraq, Iran and partially Yemen. Hezbollah, with 130,000 rockets in Lebanon, is a danger to Israel. There is also threat by radical Islamists to the Golan Heights.Finally, having turned down Israeli offers at resolution from 1937 (Peel Commission) to 2000 (Ehud Barak) and 2008 (Ehud Olmert), the Palestinians remains a significant problem for Israel.Israel in 1948 had only 650,000 Jews. The Holocaust killed six million Jews, including 80% of those who were expected to emigrate to Israel. As Chaim Weizmann wrote to David Ben-Gurion during World War II: “Heretofore we were a people in search of a nation: when this is over we will be a nation in search of a people.” The 650,000 Israeli Jews in 1948 would fight the regular armies of Egypt, Jordan, Iraq, Syria and Lebanon, countries with a combined population of 31 million people.Other factors also made it likely that Israel would lose. Yigal Yadin said there was only a 50-50 chance of victory. Few Jews had ever served in an army and the British had never allowed the Jews to form an army. The Arabs, by contrast, had small semi-professional armies. The United States placed an arms embargo on Israel while Great Britain sold weapons to Jordan and Iraq.And yet Israel prevailed and expanded the size of the state given by the United Nations. It has survived massive Arab boycotts, largescale terrorism and 11 wars since 1948. Israel is recognized by only two of 23 Arab states. Until recently it had almost no oil or natural gas while the Arab states and Iran had the majority of the world’s oil. Over 500,000 Israelis have emigrated, mostly to the United States. Over one billion people around the world proclaim themselves antisemites and the Boycott, Divestment and Sanctions (BDS) movement flourishes in the US and Europe.Yet, today Israel has only five percent unemployment and is the third country listed on the NASDA Q after the US and Canada. Its economy has rocketed from perhaps $3 billion in 1948 to over $300b. today. It is the world leader in recycling waste water (90%). It is one of only nine nuclear powers in the world with a reported stockpile of 100-200 atomic bombs. From having minimal technological capabilities in 1947, today it is a top-five high-tech and cyber power.From having no planes, few tanks and eking out a victory in 1948, now it is the leading military power in the Middle East. The American Interest just rated Israel as the #8 power in the world. Israel is the #1 exporter of weapons to rising India, whose prime minister is to visit Israel later this year. Israel has over $11b. of trade with China. It has subterranean but growing relations with Sunni Arab states, who share a deep fear of Iran. The main English-speaking countries (US, Great Britain, Australia and Canada) are now definitely supportive of Israel.Israel’s rule of law is so strong that it has jailed a former president (Moshe Katsav), former prime minister (Ehud Olmert) and former Ashkenazi chief rabbi (Yona Metzger). Its population has boomed from 650,000 Jews and 156,000 Arabs in 1948 to 6.3 million Jews and 1.7 million Arabs today. From an average of two years of education in 1948, Israeli Arabs today have 11 years of education and the highest Arab life expectancy (79) in the region.Best of times? Worst of times? For Israel, nearing its 70th anniversary, it is both at the same time.The author is a professor at the Josef Korbel School of International Studies at the University of Denver.