For several years now during election campaigns, Prime Minister Benjamin Netanyahu has engaged in a smear campaign against Israeli-Arabs. 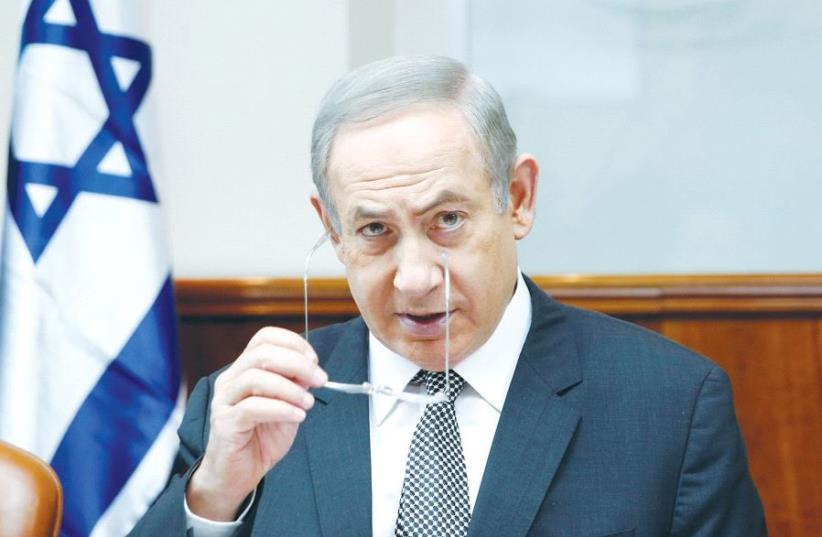 Netnayahu attends cabinet meeting in Jerusalem
(photo credit: REUTERS)
Advertisement
When it seemed like it couldn’t get worse, the past week presented us with one of ugliest political shows in Israeli history.For several years now during election campaigns, Prime Minister Benjamin Netanyahu has engaged in a smear campaign against Israeli-Arabs and particularly the Joint List, the community’s representatives in the Knesset.Over the weekend, his campaign entered a new phase.“A government dependent on the Arab parties is an existential threat, an immediate threat to the security of Israel,” Netanyahu tweeted on Saturday night amid reports that Blue and White leader Benny Gantz might try to establish a minority government with Arab support.Netanyahu then called an “emergency event,” that was held on Sunday evening.At the event, after repeating the notion that is would be an “enormous threat,” Netanyahu said that a minority government based on the support of the Arab parties would be “a breaking point in the history of the country… An unprecedented breaking point.”Other Likud members echoed Netanyahu’s line. “Gantz, Liberman and Bogie [Ya’alon] are selling the country’s security to terrorists supporters Ayman Odeh and Ahmad Tibi,” Sports and Culture Minister Miri Regev wrote on Facebook.Science Minister Ofir Akunis sent a statement to the media on Saturday night with the headline: “We are in a state of emergency,” saying “Blue and White, along with the Arab Joint List and Yisrael Beytenu, are planning to swear in a minority government that will endanger the security of the State of Israel.”Meanwhile, Odeh and Tibi said that following Netanyahu’s remarks, they have received a growing number of death threats. Odeh even asked the Knesset for bodyguards.How did we get to a point in which a party that was authorized to run and ended the race as the third biggest party in Israel is considered to be a danger to the existence of the country?What the Likud is doing is not just standard political opposition to a rival’s attempt to form a government. This is breaking the rules and playing dirty. This is delegitimizing not only the third largest party in the Knesset but 20% of Israel’s citizens as well.While there is plenty of room for criticism when it comes to the Joint List and statements over the years by some of its members, they were all approved to run by the Central Elections Committee, and some even by the Supreme Court.In his Saturday video, and then again in his speech on Sunday, Netanyahu described a situation in which Gantz, as prime minister, would have to authorize military attacks with Odeh’s consent.“Mr. Odeh, would it be okay if we attack two targets?” he said, mocking Gantz. “No? One is okay? Nothing? But do you promise that you won’t dismantle our government?” he continued.As Netanyahu once said in front on the UN General Assembly: let’s talk dugri – straight. This entire campaign is meant to lay the ground for a third election, and just another part of the ongoing “us and them” campaign against Arab society, which comes up every time there’s a new election.Netanyahu said that his opposition is to the Arab parties, and that he is “not talking about Arabs” whom he said “can be Zionists and support the State of Israel.” Really? For most of Israel, that distinction is hard to make.It is time to put an end to this divisive campaign and instead reach out to those who want to take part in general society and work to integrate them, not push them away.It seems that Arab society has changed in recent years. Ahead of the last election, Arab MKs openly spoke about joining a future coalition government and focusing on local domestic challenges – infrastructure, education and gun control – as opposed to the conflict with the Palestinians.The Arab parties have already joined hands on these matters with other parties in the past – including with Likud.A government supported by the Arab parties is not an existential threat to Israel. Arab MKs have to change their ways, but they could be a partner in a future Israeli government, one led by Blue and White – or even by Likud.