Next stop for Iran: Bahrain 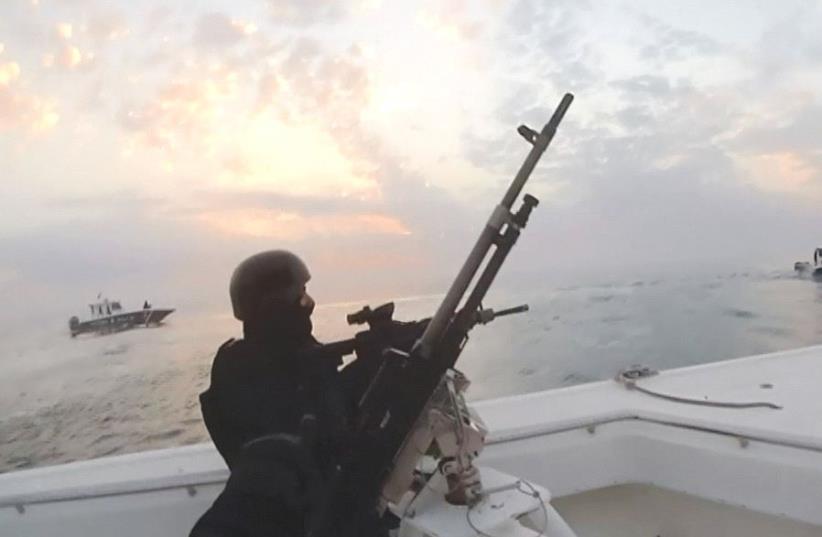 An image taken from a video shows Bahraini forces raiding a speedboat manned by Shi’ite fugitives it says were heading for Iran from Bahrain’s northeastern coast in February
(photo credit: REUTERS)
Advertisement
Ever since the JCPOA (Joint Comprehensive Plan of Action, aka “the Iran Deal”) was agreed to in the summer of 2015, Iran has become empowered both militarily and economically.Tens of thousands of Shi’ite militia, the Popular Mobilization Units, have been trained and are controlled by Iran and its proxy Hezbollah. They are the vanguard of a Shi’ite jihad stretching from Tehran to the shores of the Mediterranean, while simultaneously ethnically cleansing tens of thousands of Sunnis without a whimper from the United Nations.Now that Iran and Hezbollah are well on their way to claiming Syria and Iraq as trophies, they may goose-step their way toward their next targets. Iranian support for the Houthis in Yemen’s civil war has tied up the Saudis while allowing Iran to focus on its next likely target, Bahrain.Bahrain may be the next epicenter in the war for Islamic supremacy, the Sunni-Shi’ite conflict. Iran has made no secret of the fact that it wants to overthrow the Sunni Al Khalifa Bahrainian dynasty, which rules a majority Shi’ite population in what Iran considers one of its provinces. Just two years after the Ayatollah Khomeini took power in 1979, he tried to foment a coup in Bahrain.Here is a glimpse into some of Iran’s recent nefarious activity in Bahrain: As The Washington Post reported, “[The] U.S. increasingly sees Iran’s hand in the arming of Bahraini militants.”According to the Post, US and European officials said raids have revealed “game-changer” weapons, and “an elaborate training program, orchestrated by Tehran’s Islamic Revolutionary Guard Corps to school Bahraini militants in the techniques of advanced bomb making and guerrilla warfare.”In 2016 Gen. Qassem Soleimani, the head of the overseas Iranian Revolutionary Guards (Quds Force), threatened Bahrain with a “bloody intifada.”According to the Washington Institute’s Matthew Levitt and Michael Knights, there is a “growing network of bomb making facilities and weapons stores,” part of a coordinated “destabilization campaign” by Iran in Bahrain.Shi’ite militias and underground cells trained in Iran and Iraq are producing highly advanced weapons. Iran’s fingerprints are all over the imported weapons; the military explosive C-4 could only have come only from Iran.This month Bahrain arrested 14 people trained by Hezbollah and the Iranian Revolutionary Guards who were allegedly planning assassinations.Lets be clear: Bahrain is not an exemplar of human rights, and represses its majority Shi’ite populace. But in the name of shared interests, American administrations of both parties have relied on Bahrainian territory for American security interests.So why is Bahrain so vital to American national security interests? The answer is the US Navy’s Fifth Fleet.Bahrain is home to the Fifth Fleet, tasked with security of the Persian Gulf, Arabian Sea, Indian Ocean and the Red Sea.Up to 20% of the world’s fossil fuels transit these waters and only America’s Fifth Fleet is capable of the indispensible mission of protecting free passage for shipping. The Straits of Hormuz are just a few miles wide, connecting the Persian Gulf to the Arabian Sea. Every ship transiting the straits is in easy target range of Iranian missiles, endangering the worldwide economy.If Iran takes over Bahrain, Saudi Arabia, a key American ally, will be exposed and vulnerable. It would destabilize the region and dramatically increase the risks for American forces.The King Fahd Causeway connects Saudi Arabia and Bahrain, and was used by the Saudis to help quell the Bahrainian Shi’ite uprising during the Arab Winter. If Iran overtakes Bahrain, it could easily be used by Iran to threaten or overrun Sunni Arab oil fields and incite a Shi’ite uprising in Saudi Arabia. Saudi Shi’ites live near some of the most vital Saudi oil fields and could easily become a fifth column within the kingdom.The presence of Iran casts an ominous shadow on the whole Gulf, where Oman has already acquiesced to Iranian extortion.Oman fears Iran, which lies just across the straits and for decades has been compelled for its survival to be Iran’s ally in the Gulf.Oman has allowed Iran to use its territory to threaten shipping in the Straits of Hormuz, and may build with Iran both a gas pipeline and a causeway to connect the nations.According to the official Iranian Press TV in 2014, “the responsibility for seizing vessels trespassing on Iran’s territorial waters in the Persian Gulf has been officially given to the Islamic Revolution Guards Corps Navy, according to Rear Admiral Ali Fadavi, the commander of the IRGC Navy.”Fadavi told the country’s quasi- official Fars news agency, “The Americans can sense by all means how their warships will be sunk...in combat against Iran.”For the past few years Iranian speedboats controlled by the IRGC have been harassing American naval vessels.Now that US President Donald Trump has dipped his toe into the treacherous water of Iranian hegemony with his strike in Syria, will he also realize it is also the time to act decisively the next time the Iranian navy endangers American vessels in the international waters of the Persian Gulf? The world is waiting to see whether his attack against the use of chemical weapons was a “one and done,” or is America beginning to reassert its authority for its national interest that was so carelessly abandoned by president Obama, Susan Rice and John Kerry.The author is director of MEPIN™, the Middle East Political and Information Network™. He regularly briefs members of Congress and think tanks on the Middle East. He is a regular contributor to The Jerusalem Post.