On my mind: Gaza's tunnels 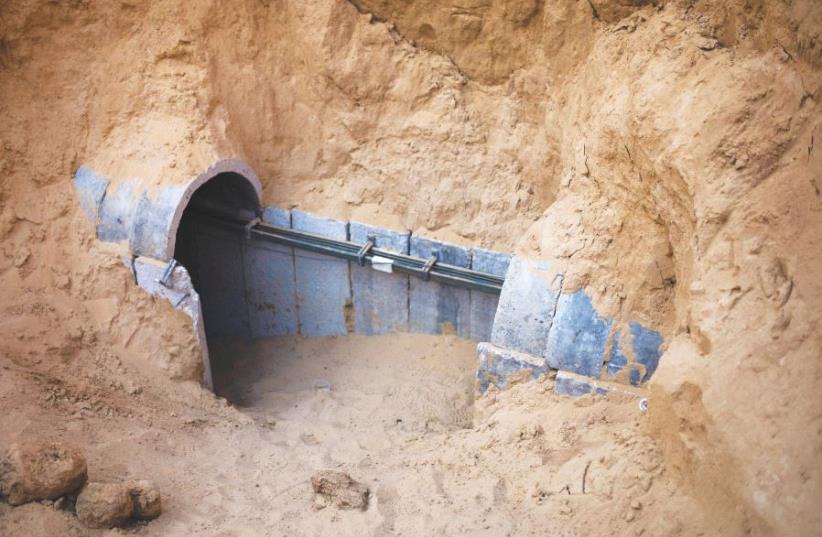 TUNNELS FROM Gaza are a threat but the government’s tunnel vision also needs to be corrected
(photo credit: REUTERS)
Advertisement
The construction industry is thriving in Gaza, but we have evidence once again that much of it is taking place underground. Undeterred by the outcome of the Gaza war three years ago, Hamas, firmly in control of the coastal territory for more than a decade, and its terrorist sibling Islamic Jihad have been busy excavating toward and into Israel.Israel’s discovery of a tunnel beginning in Khan Younis, crossing under the border and reaching near Kibbutz Kissufim revealed that digging remains a strategic priority for the Gaza-based Palestinian terrorist organizations. Its destruction last week confirmed that Israel’s government and military will take defensive measures to protect its citizens.Discovery of the now destroyed tunnel was credited by Israel’s prime minister to “breakthrough technology” developed following the 2014 war, when Israeli forces encountered an extensive network of Hamas tunnels, including 14 extending into Israel. By war’s end, Israel had destroyed 32 tunnels, many large enough for terrorists to stand upright.Israel learned at the time that a massive terrorist attack using the tunnels had been planned for the Jewish New Year. While terrorist attacks have always been one real concern, another is using these tunnels to kidnap Israelis. In 2006, Hamas grabbed Gilad Schalit and held him hostage in Gaza for more than five years.A 2011 Hamas-Israel agreement led to Schalit’s release in exchange for over 1,000 Palestinian prisoners, many of them convicted terrorists with blood on their hands.Israel is erecting an impenetrable concrete wall deep in the ground along its border with Gaza to obstruct future cross-border excavations. It is expected to be completed in 2019. Demonstrating its unlimited audacity, Hamas actually protested the subterranean wall plan after it was announced last year, claiming it would hinder its resistance against Israel – though Hamas never calls Israel by its proper name.Hamas, Hezbollah and Islamic Jihad not only refuse to recognize Israel, but seek its destruction, and thus stand firmly in the way of those who are genuinely working to achieve peace.Since capturing Gaza from Fatah in 2007, after Israel withdrew totally from the territory and transferred it to the Palestinian Authority, Hamas and Israel have fought three wars, and after each Hamas replenished and expanded its stockpile of missiles and rockets. Hezbollah acted likewise after its wars with Israel, the last one in 2006, significantly increasing its own supply of armaments to be used in the next round.In defense against these threats, Israel, with US support, developed the Iron Dome, which has been successfully deployed to down short-range missiles and rockets. The technology used to detect tunnels, and the underground wall being built along the Gaza border, are further necessary defensive actions.Despite the reconciliation agreement Hamas signed last month with the PA, it has adamantly insisted that relinquishing its stockpile of weapons is not part of the deal. Nor, presumably, is the tunneling.Indeed, the destroyed tunnel’s discovery by Israel came only days after UNRWA, the UN relief agency operating in Gaza, announced that it had found – and not for the first time – a tunnel beneath one of its schools.In May 2014, a similar PA-Hamas “unity agreement” was announced with great fanfare. Two months later, Hamas kidnapped and murdered three Israeli Jewish teenagers and launched rocket barrages on Israel, sparking the war in Gaza that summer.Now, Hamas has called Israel’s destruction of the tunnel “a desperate attempt to sabotage efforts to restore Palestinian unity,” while Fatah called it a “crime” to “thwart the Palestinian national reconciliation.”And Iran, which provides political and material support for Hamas, as well as for Hezbollah, and continually threatens to eliminate Israel, joined in condemning Israel for demolishing the tunnel.The impossibility of Hamas reforming its policies and seeking peace was reaffirmed after the reconciliation agreement with the PA.“The time in which Hamas discusses the issue of recognizing Israel has ended,” declared Yahya Sinwar, the Hamas leader in Gaza. “The discussion now is about when to erase Israel.”For the Trump administration and others seeking a breakthrough to resume Israeli-Palestinian negotiations with the goal of achieving a comprehensive peace, Hamas dominance in Gaza remains a real and formidable obstacle.The writer is the American Jewish Committee’s director of media relations.