It’s time that the Obama administration and members of Congress step up and send a clear signal to the Palestinian unity government. 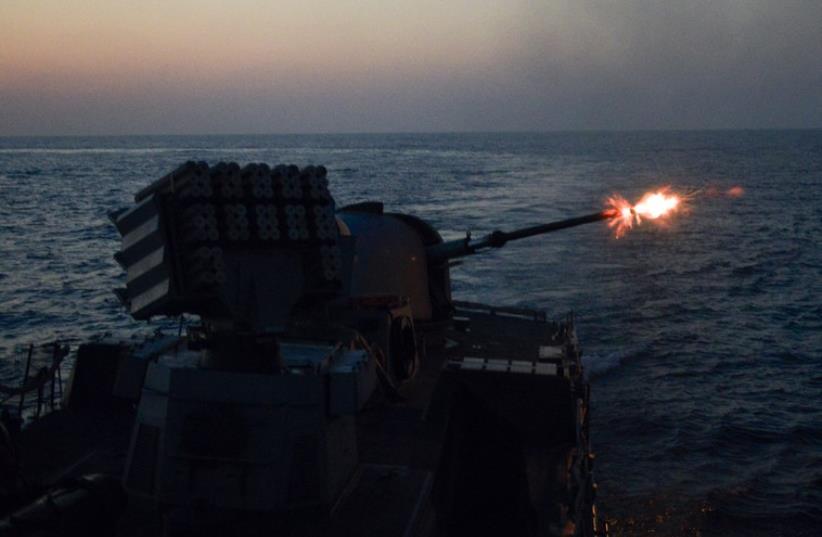 IDF navy near Gaza
(photo credit: IDF SPOKESMAN'S OFFICE)
Advertisement
It was only a matter of time before the new unity government between the Palestinian Authority and Hamas, a designated terrorist organization, proved to be a deadly agreement for both Palestinians and Israelis. I saw the writing on the wall as soon as the Palestinian Liberation Organization chose to embrace the terrorist group, effectively ending hopes of a peace agreement between the PLO and Israel.Last month, three Israeli teens – one of whom was also a US citizen – were kidnapped by Hamas terrorists while the boys were simply trying to catch a ride home. For weeks, the IDF searched tirelessly for the boys. Friends and family of the boys, Eyal, Gil-Ad, and Naftali organized social media efforts to raise awareness of the kidnapping. The saga came to a tragic conclusion when the bodies of the three boys were discovered in a field northwest of Hebron on June 30.I met personally with Naftali’s aunt. My heart breaks for her and her family’s loss. Several days later, in what appears to have been an act of vigilante justice, a Palestinian boy, Mohammed Abu Khdeir, was killed. Prime Minister Binyamin Netanyahu was quick to condemn the act of violence and swiftly arrested six individuals suspected of being responsible. Netanyahu even personally called the family of the victim with his condolences and to let them know their family member would receive justice.Conversely, Hamas chief Khaled Mashaal praised the kidnapping of the Israeli boys, saying, “Blessed be the hands that captured them... this is a Palestinian duty.”Another Hamas official called the act “heroic.” To date, not a single arrest has been made for the murders of Eyal, Gil-Ad and Naftali.Sadly, rather than reflect on these tragedies and attempt to move forward, Hamas has launched an allout assault on the nation of Israel. Hamas militants launched 96 rockets at Israel on Thursday July 10th alone, according to a report from the IDF. The Iron Dome, Israel’s air defense system, intercepted and destroyed an additional 14. According to the IDF, 117 missiles were fired into Israel by Hamas within a 24-hour period.Recently, I met with Israeli Ambassador Ron Dermer, who encouraged me to download the Red Alert Israel application for my phone to help me better understand the constant assault Israel is under. The app sends a notification to my phone every time terrorists launch missiles, mortars or rockets into Israel.The app goes off, eerily, dozens of times throughout the day.Most Americans can’t begin to understand what dayto- day life is like for millions of Israeli citizens. We can’t relate to hearing sirens go off – notifying us that we have 15 seconds to a minute to seek shelter from a potential rocket attack. We’ve never had to curl up in bomb shelters with strangers, wondering about the fate of our family and friends.We, as Americans, don’t have to live our lives wondering if the person next to us on the bus may be a suicide bomber. Nor do most American parents live in existential fear that their kids might be kidnapped off the street and murdered by terrorists. This is the daily reality for millions of Israelis who live in constant fear of attack from terrorists who vocally wish for their extinction.Israelis have faced fierce criticism for launching targeted strikes to eliminate Hamas’ missile sources after they’ve been used to kill Israeli citizens. The Israeli forces have even gone to great lengths to try to warn civilian populations prior to launching attacks in order to give them time to evacuate. On the other hand, a Hamas spokesperson said that, “all Israelis are now targets,” including women and children.The conflict in the Middle East is complex, multi-faceted and unlikely to be resolved anytime soon. There have been countless lives lost on both sides of this struggle and that is a tragedy.The Palestinian government still refuses to even acknowledge the existence of a Jewish state. Without the Palestinian government’s willingness to meet the most basic preconditions, I fear that no peace agreements can be expected in the near future. Palestinian leader Mahmoud Abbas knew that by forming the unity government with Hamas, he had fractured the possibility of a peace agreement. The Palestinians have yet to demonstrate a commitment to the rule of law.The failure to arrest anyone for the deaths of Eyal, Gil- Ad, and Naftali demonstrates a lack of commitment to justice.It is my hope and prayer that this conflict will come to a peaceful resolution, but from what I’ve seen from Hamas in the past, I’m not optimistic. It’s time that the Obama administration and members of Congress step up and send a clear signal to the Palestinian unity government and the world as a whole that the US is unwavering in our commitment to the safety and security of the nation of Israel. They are not alone in this.

The author is a US Congressman (R-North Carolina) and serves on the House Foreign Affairs Committee.
Advertisement
Subscribe for our daily newsletter