Twenty-seven years in jail enduring this kind of suffering, and to come out of that and be prepared to forgive.

By WARREN GOLDSTEIN
Mandela funeral in South Africa crowds 370
(photo credit: REUTERS/Yves Herman)
Advertisement
As Jews, when we try to shed light on anything, we look in our Torah.Amazingly enough, Nelson Mandela passed on the eve of the Shabbat Jews around the world read the portion of Vayigash, which, concluding with Vayechi this week, tells the story of Joseph. The parallels between the lives of Joseph and Mandela are extraordinary.Joseph’s brothers turn on him and they throw him in a pit, whereupon he is sold into slavery and cast into exile, before ending up in jail. And then through the blessings of G-d he finds his way out of jail and becomes the prime minister of the superpower of the time – Egypt.Many years later, when he once again confronts his brothers, he has a choice.Does he let the feelings of bitterness, anger and resentment over the way he was treated – exacerbated by his many years in incarceration – overcome him? Just as his brothers, whom he loved, turned on him, does he now turn on them and, from a position of heightened power and authority, exact vengeance and judgment? We know that Joseph – described by our Sages as Yosef Hatzaddik, Joseph the Righteous – chose the path of reconciliation. He forgave his brothers. He realized that exacting vengeance would tear the family apart. And so he set aside his own feelings and was prepared to look past all of his suffering – 22 years away from his family; 22 years of loneliness and estrangement; 22 years – many of which were spent imprisoned and confined, and filled with hardship and affliction. He was able to transcend all this suffering.In many ways, Nelson Mandela is the Joseph of our times. White South Africans – his fellow countrymen, people whom he ultimately regarded as his brothers and sisters – turned on him. He was thrown in jail, where he stayed for 27 years. Yet somehow, he emerged with the saintly grace to put all of that behind him so that the diverse family of South Africa would not be torn apart. And, like Joseph of the Bible rebuilt his family, President Mandela rebuilt his country. 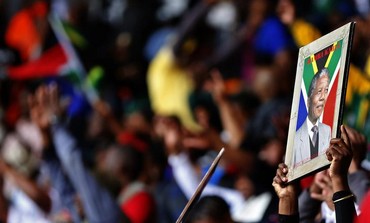