Haiel Stawi reminds us, in life and in death, that this country is a place more diverse, more complex and more beautiful than even I knew. This is all of our Israel. May his memory be a blessing. 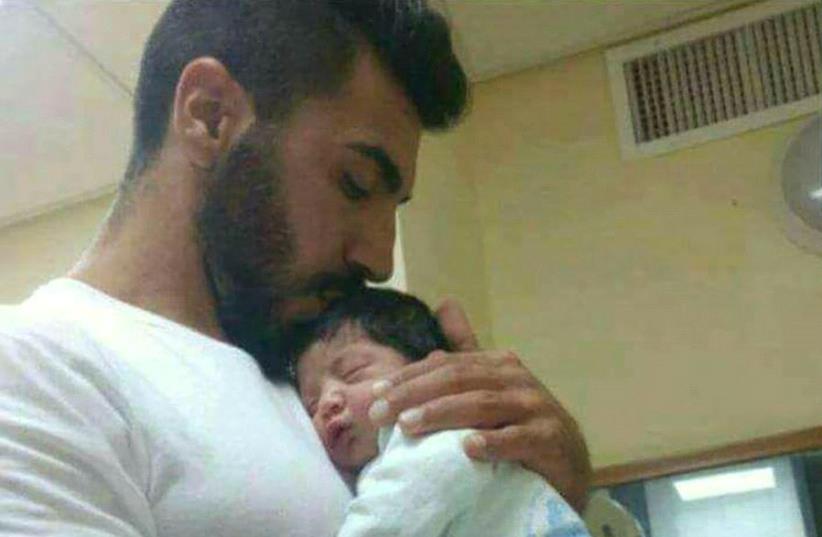 Slain police officer Hail Stawi and child
(photo credit: ISRAEL POLICE)
Advertisement
There’s a standard picture, one of the most powerful poses there is – a father cradling his newborn to his chest. It projects that essential moment when a young man recognizes that he is now something entirely different, responsible in a new kind of way, holding in his hands at once both hope and power and complete fragility. I kept looking at that picture.It had been a hot and difficult Friday, starting with the terrifying news of a terrorist attack in Jerusalem. Worse yet, a terrorist attack by Arab citizens of the State of Israel. Worse yet, at the holy Temple Mount itself. And worst of all, two Israeli police officers had been murdered as they tried to protect innocent lives.Officer Haiel Stawi, 30 years old, was the young man holding his newborn son. The other officer, Kamil Shnaan, was preparing to celebrate his engagement. The cutting down of life in its prime, well, the depth of tragedy was clear to everyone.It was a few hours to Shabbat when I realized that Stawi was in fact a neighbor, from a couple of villages over, in the mixed Druse-Christian-Muslim town of Maghar.That’s when I walked over to my husband and explained that we needed to change our Friday afternoon take-thekids- to-the-pool plans. We had a funeral to attend. I admit, we were both a little nervous. We have Christian friends in Maghar, but no Druse friends. In fact, I suddenly realized, I didn’t know any Druse at all. But it was important to me that we show up. To remind ourselves and our children that just as important as celebrating the return of Jews to our ancestral homeland is saluting those who give their lives in its – in our – defense. To remind ourselves that the Jewish state does not mean only Jews. And to remind ourselves that all those who endanger their lives in service here do so for all our citizens.Earlier this week, an op-ed appeared in an Israeli newspaper that included the following: “No Israeli parent has the right to give birth to a child in this country and not teach them why they live in Israel, why they are Jewish, why we came back to this land after 2,000 years and why we need to defend it. The stakes are extremely high.”NATURALLY, I was incensed. What about the 20% of our citizens who would have a difficult time doing so because well, they aren’t Jewish? How can we forget the other 20%? It happens so easily. Barriers of language, culture, religion, dress, schooling, villages, neighborhoods, and suddenly you forget how diverse and complex and beautiful this “Jewish state” really is.As we turned off the highway toward the village, we saw two young men hitchhiking. They were easy to understand: huge kippot, long earlocks, big backpacks. God forgive me, but I thought to myself “these guys look like the church-burning type.” Obviously we weren’t going to pick them up. It was clear that they were on their way to the isolated Jewish community near the village, with its military yeshiva. We were headed somewhere different entirely. That wasn’t our Israel.The funeral itself was packed, and stoic. My husband and I certainly stood out, both as “not Druse” and as religious Jews. But as the casket passed, we felt that it was a huge honor to be able to accompany this brave young man’s body a little ways toward its final resting place.And, to be perfectly honest, I admit that I was feeling pretty good about myself for doing the right thing.After walking with the funeral procession a short way toward the cemetery, we made our way back through the village to our car. The heat was fierce, and I turned to accept a cup of water from one of the residents. And as I turned back around I was shocked to see that there stood the two hitchhikers we hadn’t even considered picking up, with a simple question on their lips: “Where is the funeral”? Haiel Stawi reminds us, in life and in death, that this country is a place more diverse, more complex and more beautiful than even I knew. This is all of our Israel. May his memory be a blessing.The writer is the director for the Israel Center for Jewish-Christian Relations and an associate fellow at the Philos Project. She can be contacted at [email protected]