Parting Shot: Riding through the headlines

Like most Israelis, I continue to go about my usual routine as much as possible. 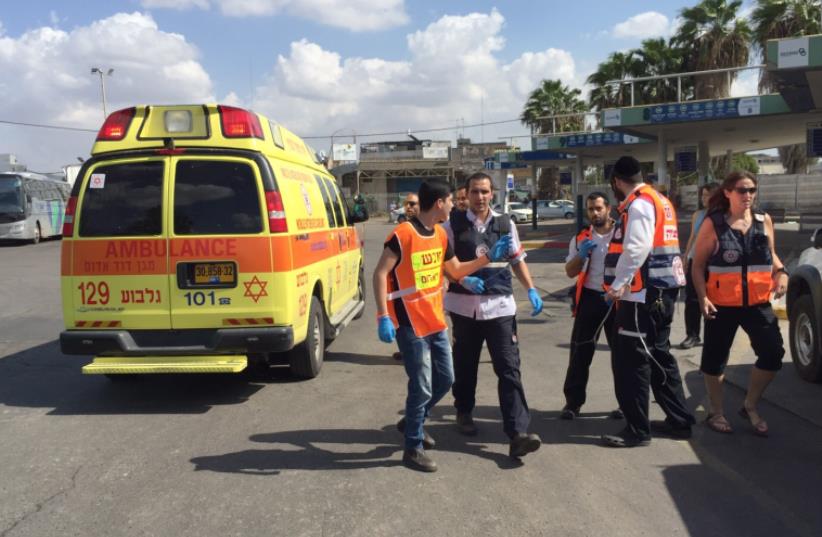 MDA at Afula terror incident
(photo credit: MDA)
Advertisement
Among the many messages and posts I’ve received during the current terror campaign against Israel was one by a friend in the US urging my family and me to stay away from the “hot spots.”Well, ahem... that’s unlikely to happen, since it’s impossible to predict which spot is going to be hot until you’re already engulfed in the flames of an attack. That’s why, like most Israelis, I continue to go about my usual routine as much as possible.The bus route I take generally twice a day to and from my office is like some macabre version of those ‘homes of the Hollywood stars’ tours – passing by the “greatest hits” that have been in the headlines in recent days.It starts off right around the corner from The Jerusalem Post, where Wednesday night, convoys of security vehicles with wailing sirens zoomed past our open windows on the way to the central bus station, where a Palestinian had just stabbed an elderly woman climbing onto a bus.A few hours later, close to midnight, the long traffic lines and the tumult was replaced by an eerie quiet, with most of the late-night cavalcade of motley street traffic absent and the bus stop deserted.I put on my headphones, turn up the music and join the three passengers on the No. 174 as it starts its 10-kilometer journey to Ma’aleh Adumim by turning down Bar-Ilan Street toward Ammunition Hill. That travel hub featuring a light-rail stop along with numerous bus lines has been the site of a series of driveby ramming attacks and more recently several stabbings, despite being situated directly across from the Israel Police national headquarters.Tonight the security personnel manning the heavily barricaded waiting area outnumber the passengers, as most residents of the Jerusalem area are preferring to hunker down after dark in their homes instead of tempting fate.As we cross Route 1, which marks the unofficial border between west and east Jerusalem, the streets are even more desolate.Emerging from the Naomi Shemer Tunnel, which cuts through Mount Scopus, we’re in the West Bank, passing prime rock-throwing locations that have targeted Israeli vehicles repeatedly.I stare out the window, looking for any movement in the dark, desolate landscape bordering Isawiya, as the strains of The Replacements’ song “Portland” with its sage advice of ‘trust no one, I suppose’ rings true in the moment.Now, we’re passing the a-Zaim checkpoint on the other side of the road, the site where a Palestinian woman was nabbed with a cooking gas canister-bomb in her car by an alert policeman, and another flashpoint of attempted stabbings and rundowns. The bored-looking young soldiers don’t have much to do tonight, as the road heading into Jerusalem is practically devoid of traffic.Careening down the steep, winding road toward the Ma’aleh Adumim exit, all eyes continue to look out the window as Radiohead’s timely plea of “no alarms and no surprises, please” fills the void.The slow upgrade to Ma’aleh Adumim lightens the mood, with the mothership in view. The checkpoint at the entrance to the city, across from the Palestinian community of Azariya, marks the last terrorist attack site on our journey. It is the scene of the usual barrage of attempted stabbings, shootings, and car-rammings, but tonight we’re laconically waved through by the security company guard.Minutes later, I’m ensconced at home with a late-night snack.It didn’t end that peacefully a few nights earlier – at the top of the incline approaching the traffic circle junction between Ma’aleh Adumim and Azariya, I spied a bunch of flickering lights about 60 meters away atop a hill that led to the Arab village. Before I was able to comprehend what was happening, six figures on the hill threw the lights – actually firebombs – toward the bus in an arching trail like a comet. They all landed less than 10 meters away from the bus, blocking the road with flames.As the perpetrators ran back toward Azariya, the driver stopped short, backed up and bypassed the obstacle. Some passengers stoop up, others muttered about the lack of security, and caught up in the surreal quality of the moment, I expected a director to suddenly emerge and yell “cut!” That didn’t happen. Instead, I arrived home, looked in on my sleeping family and pondered what might have happened if those young Palestinian throwing arms had been a little stronger.In the morning, like the rest of the country without any other choice living through these extraordinary times, I got back on the bus.