Passover then and now – Making the impossible possible 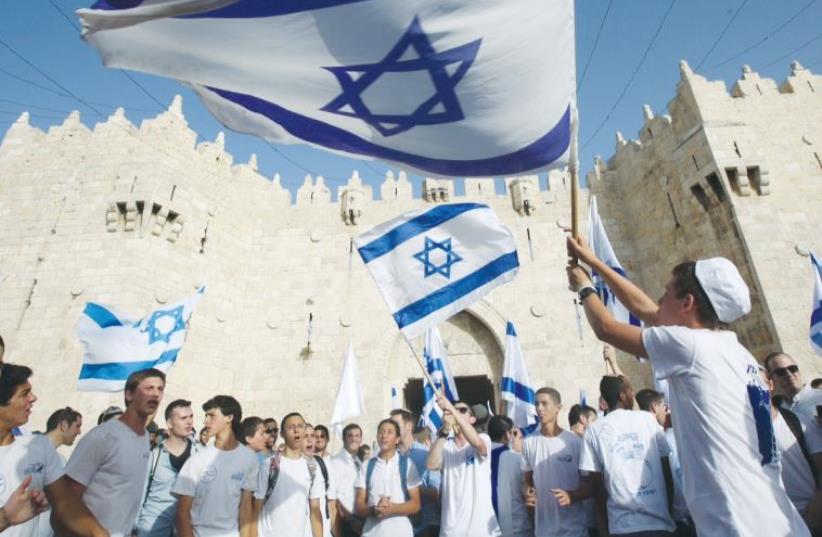 Young people wave Israeli flags during the Jerusalem Day march on June 5
(photo credit: MARC ISRAEL SELLEM)
Advertisement
The history of the Jewish nation is a continuum of events which challenge the boundaries of convention.Over the generations, in events in the distant and recent past as well as in the present – the Jewish nation has turned the unbelievable into possible.On Passover we celebrate a formative event in the annals of the Jewish nation, the Exodus from Egypt which happened approximately 3,500 years ago. This was the point in time when Am Israel was born and evolved from a family into a nation. It was an event that shaped the foundations of the personality of the Jewish nation to the extent that thousands of years later, and in face of all the changes of time, these foundations can still be found in its character. Specifically, its challenging nature, which questions conventional wisdom and continually tests how to penetrate the glass ceilings which are considered taboo.Since then, over thousands of years and today, Am Israel is a unique nation, and it attracts the world’s attention more than nations many times its size. Sometimes this is positive attention, and much more frequently this is negative attention and antisemitism, because Am Yisrael challenges accepted thinking.From the Bible and the Midrashim of the Sages, we learn that Egypt of the Passover period was a worldwide empire, one with a powerful army and a dominant economy and whose idolatrous culture worshiped materialism and Pharaoh’s personality cult. Egypt was also called “the House of Slaves” since its economy was based on slaves who were imported from all parts of the ancient world. These slaves were considered “work tools” or “objects” with no basic human rights. It’s therefore clear why the Egyptians guarded this resource fanatically and tyrannically.Their army secured the borders, so that no slave would be able to be freed or escape from Egypt.MOSHE RABBEINU’S call to Pharaoh to “Let my people go” was hopeless from the start. Even if for some reason Pharaoh would have wanted to be receptive to Moshe Rabbeinu’s appeal, he couldn’t have. The freeing of any slaves, especially on this scale, would have resulted in the loss of the Egyptians’ main economic asset and threatened the stability of the economy.On Passover we read the Haggada at the Seder table, eat matzot and drink four cups like free people. The Haggada tells the story of the Exodus from Egypt and begins from “We were slaves to Pharaoh in Egypt,” which includes the backbreaking work from which many died. In the story we also celebrate the miracle of going out to freedom. Therefore we pass the message on to the generations that despite the fact that achieving liberation from Egyptian bondage was hopeless from the outset, in the end Pharaoh the king of Egypt was forced to set Am Israel free.This came to be through a combination of two factors, one of which was Divine miracles – the Ten Plagues and the Splitting of the Red Sea. The other was that Am Israel under the leadership of Moshe Rabbeinu did the unheard of, it courageously dared to rebel against its oppressors by taking sheep (which the Egyptians worshiped) before their very eyes, and even slaughtered them. We emphasize in the story how difficult it was for a nation of slaves, who by then were enslaved for several generations, and their lives depended on their enslavers, to rise up and carry out such a drastic act against their masters.The maror (bitter herbs) we eat at the Seder memorializes our bitter enslavement in Egypt, and the matza memorializes our freedom and the courageous act of Am Israel in leaving Egypt when a quick and determined exit was necessary, and the Israelites couldn’t let their dough rise and become bread, and therefore they ate matzot.The Exodus from Egypt dumbfounded the ancient world, as the Bible says: “Nations heard and were frightened; trembling gripped the inhabitants of Philistia.”They couldn’t comprehend how a nation of slaves that was subjugated for over 200 years was able to prevail over the great Egyptian empire and break down its walls. In short – how they did the impossible! We can draw clear lines between the Exodus from Egypt and the birth of the Jewish nation, through the thousands of years which have passed and to our day.Since the return to Zion, the modern world looks on in amazement at how time after time, the Jewish nation and the State of Israel break through conventional barriers, with courage and out-ofthe- box thinking, and do the impossible.A state less than 70 years old, with threats to its existence on all sides, and which had to fight for its survival in nearly every decade, has become a modern, developed country. And despite all of its problems and huge defense expenditures, it manages to maintain economic stability and growth unmatched anywhere in the world. A state which in a short time became a military power with daring and creative thinking, which in six days defeated three armies several times the size of the IDF, managed to turn near-defeat into victory in the Yom Kippur War, freed hostages thousands of kilometers away in Entebbe and exports military expertise to the entire world, including in the field of cyber warfare. A state which despite its small size, has become an international center for innovation and startups, and for the development of electronics, computers and technology for agriculture, medicine and defense which states several times larger and older than it, such as Russia and China, purchase from it.In East Asia there is a special appreciation for Jewish cultural sources like the Talmud (which has recently been translated to Korean). They believe that it is the wellspring of the special creative spirit of the Jewish nation.The writer is a rabbi and a colonel in the IDF reserves.