Planning for the morning after

Ultimately, Israeli sovereignty over Area C should be seen as the positive, ethical and logical step to be taken in the wake of yet another failure to craft a by-definition un-craftable deal. 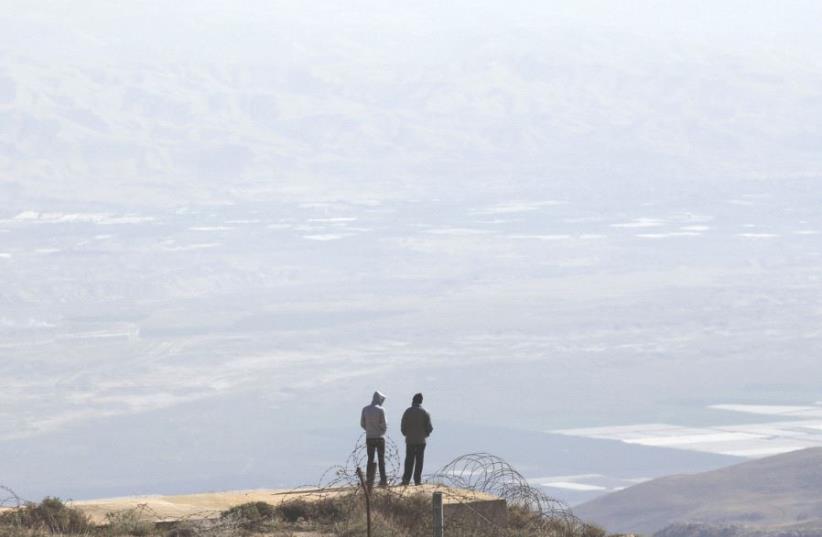 TWO SETTLERS stand atop a ridge in the West Bank.
(photo credit: REUTERS)
Advertisement
Contrary to all expectations, the geo-political buzz in Israel is focused on renewed discussions with the Palestinians on advancing a peace deal. The impetus for this is coming from US President Donald Trump. Consistently during the recent US presidential campaign, Trump cited his strong desire to be the man to make peace between the adversaries, and, of course, his belief that he was the right man for the task.The US president is a man of many talents, and he might believe that his lack of in-depth knowledge of the history and the fault lines of the standoff between us and the Palestinians is actually one of them. He is not burdened with the details of the past, but looking at a blank canvas, on which he believes he can paint the picture of a viable peace deal.But what if he is mistaken? What if, despite the interest of both parties in placating the president, there is no overarching deal to be had? After all, the minimum requirements of each side vastly exceed the stated flexibility of the other.It therefore behooves the Israeli government to have a fallback scenario, a Plan B as it were, for how to advance peacefulness, even if peace itself is out of reach.Plan B focuses on Israel’s extending full sovereignty over Area C of the West Bank, granting the same rights to all Israeli citizens living there – nearly 460,000 – as well as a vetted pathway to citizenship for Arabs living there – of whom there are less than 100,000. We believe that this is the best path to peaceful coexistence, based upon respect for human rights, dignity and security.Such a plan might seem to be counter-intuitive, if not counter-productive. How does what many will perceive to be a land grab advance the cause of peace? The answer lies in the realization that it will follow in the wake of yet another failed effort to cut the Gordian Knot. It will be the product of yet another, seemingly inevitable, failure.So, applying Israeli sovereignty to Area C has the advantages of clarity and incremental progress, incorporating the heavily Jewish areas into pre-1967 Israel, an outcome which all know would be part of any prospective peace deal. Such a move normalizes the status of the Jewish residents of Area C and provides a road map for the inclusion of its Arab residents as citizens of Israel.Sovereignty over Area C is also an important step in the process of disabusing the Palestinians that maximal rejectionism is a winning strategy. Just as the prime minister has stated that moving the US embassy would explode Palestinian fantasies as to the future of Jerusalem, so too does sovereignty give the clear message that we Israelis will not be deterred by the obstinacy of the Palestinians. Those who believe that Israel needs to pursue a victory strategy to disabuse Palestinians of other fantasies should cheer sovereignty over Area C.Ironically, applying sovereignty over Area C advances the cause of a final resolution by narrowing the number of moving parts and by putting the focus of the discussion solely on Areas A and B. While we believe that ultimately, they too should be under Israeli sovereignty, at a minimum the discussion becomes more focused.In addition, sovereignty over Area C can be made in conjunction with a bilateral economic development deal with the Palestinians focusing on Areas A and B. This would allow President Trump the satisfaction of having enabled a meaningful deal between the parties, even if it isn’t “the deal,” and would advance the cause of peacefulness, and possibly peace itself, in the region.Sovereignty also reinforces the Jewish People’s 3,500- year history as an indigenous people, as well as Israel’s legal and moral rights under international law, from San Remo (1920) onward, which designated all of Judea and Samaria as part of the Jewish homeland.Applying sovereignty to Area C reflects the Israeli consensus and should therefore be adopted as policy by the Israeli government. A recent poll demonstrates that 75% of Israelis desire some form of sovereignty, with almost all of that group favoring sovereignty over Area C. Such application of sovereignty is a significant step forward, not a resigned return to the status quo, and should be depicted as such to the world, particularly to President Trump.Ultimately, Israeli sovereignty over Area C should be seen as the positive, ethical and logical step to be taken in the wake of yet another failure to craft a by-definition un-craftable deal.The author is a business executive and is a member of the Sovereignty Movement, a Women in Green initiative of which he is a board member. He may be reached at [email protected]