Police and Thieves: When the punishment doesn’t fit the crime

Most of these bombs – like the one Machlouf was caught with – are made from industrial grade, factory produced explosives manufactured for the army and stolen from IDF depots. 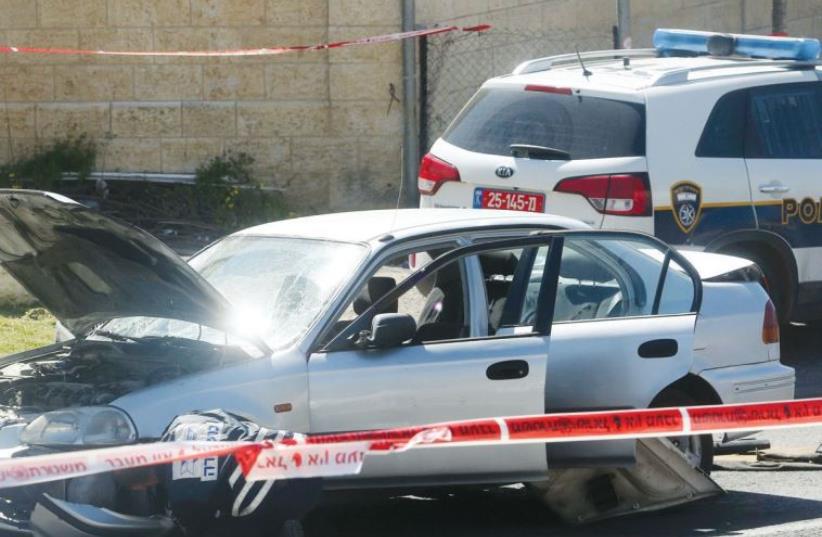 Illustrative photo of police at a crime scene
(photo credit: MARC ISRAEL SELLEM/THE JERUSALEM POST)
Advertisement
If Adi Machlouf decided to kill you, you’d never see it coming.He’d probably do it from miles away, and maybe the worst part is that you probably wouldn’t even be the target.Machlouf, the so-called “engineer of the underworld,” made the news again this week when his sentence was finally handed down, in a case that made waves late last year when he was first arrested.In mid-December, Machlouf was caught on tape picking up a bomb that he had made and which he had stashed in an Ashkelon park the night before.Detectives staking out the scene tackled him as he dug up the bomb. He was caught red-handed – even the gardening gloves he was wearing to keep from leaving prints were red. It was a rare moment for the Israel Police – a high-profile organized crime target caught in the act of committing a serious crime, recorded clear as day for every Israeli media outlet to run.They had him dead to rights, with all the evidence needed to throw the book at him.A lot can happen in nine months though, and this week a Beersheba court handed down a sentence that leaves a lot to be desired.Machlouf, a repeat offender believed to have built the bombs used in a series of gangland hits in southern Israel, was sentenced to three years in prison and a year’s probation, as part of a plea bargain put together by the prosecution.Another defendant – who was arrested when he came to pick up a decoy bomb that day from an undercover police officer in the city – was given a oneyear sentence and probation.Both weak sentences were handed down despite the fact that there were at least 40 witnesses – including detectives and Southern District commander Yoram Halevy – as well as wiretap evidence and of course the infamous video of Machlouf at the park.The plea bargain was lenient enough to draw the ire of presiding judge Eliyahu Beitan, who in his closing remarks spoke at length about the dangers posed by the bombs Israeli criminals have been setting off in Israeli cities, saying that “in recent years, as part of a general escalation in underworld violence and the high availability of weapons and explosives, the use of bombs by criminals has become popular and has led to people being hurt – both those who were the targets of the attacks, and innocents.”Beitan was clearly disturbed by the deal, saying, “A three-year sentence... in these circumstances is very lenient” and “is close to being enough to justify negating the plea bargain.” But in the end, Beitan decided to approve it.The prosecution said in their defense that the original case didn’t have enough evidence, and the wiretap evidence was “open to interpretation.”They also pointed out that the defendants are fathers, have already been in prison for months awaiting sentencing, and that by confessing and cooperating have saved the court system a great deal of time and energy.The “they’re both fathers” angle is amusing, particularly in light of the fact that Machlouf had his infant son with him on the day he went to pick up the bomb. He’d gone to the park with his wife and child, using a family outing to the park as cover. If he hadn’t been arrested, it can be assumed he would have taken the bomb back to his car and driven off with it, risking the lives of his family and everyone they passed on the street.Another defendant in the case conspired to pick up a bomb that same day from Machlouf, with his son in his car as well.Bad parenting aside, the sentence is a solid example of what police – and the Israeli public – are up against. Obviously much of the blame for the underworld violence lies upon police, whose responsibility it is to prevent it, but the courts must also bear some responsibility.It’s an oft-repeated claim by police that prosecutors agree to weak plea bargains to clear cases on the court docket.They also often claim that when they have solid evidence in a case, exposing it and their agents and informants under cross-examination in court can hinder future police work. In this particular case, the feeling is that even though they have a solid case – or at least one that appears so to an outside observer – there is still going to be a strong tendency on the part of the prosecutors to expedite the process and secure a guilty plea, even at the cost of deterrence.Judge Beitan was right when he spoke about the grave danger posed by the explosives criminals have been using against each other in recent years. Most of these bombs – like the one Machlouf was caught with – are made from industrial- grade, factory-made explosives produced for the army and stolen from IDF depots. There is a constant supply of explosives, they’re easy to get, easy to make and when they go off not only are they lethal, they tend to leave little forensic evidence.The high availability of explosives is one of the main factors that led to their soaring popularity among the Israeli underworld in recent years. Improvised explosives, car bombs and the like became so trendy the underworld was saturated with them. Bombs became part of the toolbox of small-time criminals waging petty feuds. Add to this mix the weak sentences handed down by the courts.Bomb-makers like Machlouf are responsible for bombings in Israeli cities that kill civilians and strike terror into the hearts of non-combatants. Whenever Israeli authorities have an opportunity to throw the book at a suspect like this they should find the means to do so, and make the punishment fit the crime. ■

The writer covers crime, African migrants and security issues for The Jerusalem Post. He also writes and hosts “Reasonable Doubt,” an English-language crime news podcast on TLV1.FM. His blog can be found at www.benjaminhartman.com