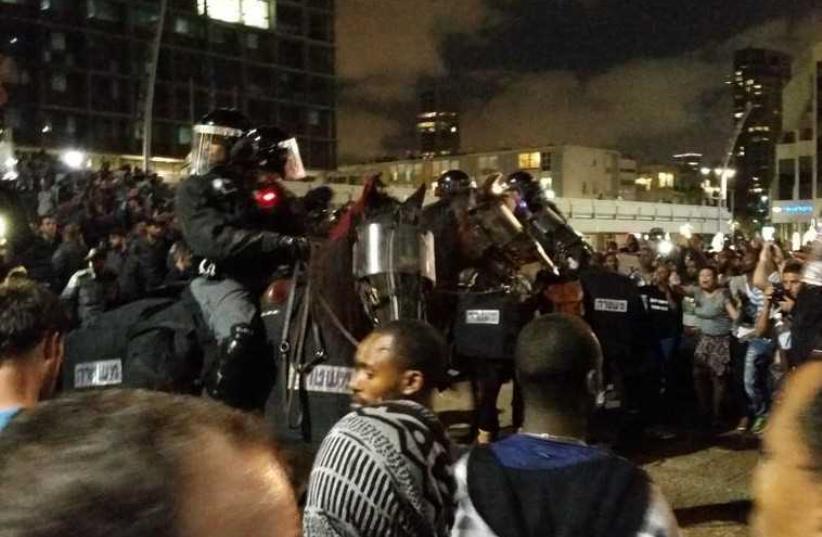 Anti-racism protest, Tel Aviv
(photo credit: REUTERS)
Advertisement
The bad news is that individual thugs in police uniform can ignite a conflagration that thousands of good cops cannot put out. This is what happened when two officers set upon a soldier of Ethiopian extraction in Holon early last week and roughed him up apparently without provocation. A video of the incident became the burning match tossed into a tinderbox. Demonstrations ensued and ultimately sprang out of control (spurred on by white anarchist provocateurs, clearly visible and audible on TV footage).The good news – in an inverted sense – is that the surfeit of thuggery in police ranks is in all likelihood not the product of racism. Sad as it is to say, too many of our law enforcement officers are equal-opportunity ruffians with a badge. Often intoxicated with power, they are prone to lord it over anyone regardless of race, creed or gender.One facile explanation is that members of our constabulary earn too little, triggering a cycle of negative selection to the force. Higher salaries, goes the theory, would net better officers.
See the latest opinion pieces on our page
But nothing in society is ever quite so simple. A pattern of behavior, indeed a subculture of misbehavior, has entrenched itself in the ranks and it in turn tarnishes the police’s reputation. This makes the service unattractive, pay considerations aside, exacerbating the negative selection.The police has become a problem – and not just in the Ethiopian-Israeli context.
Not long ago, another video became viral. It showed cops beating up an adolescent at a gas station for no apparent reason. The victim was white. He was hauled to the nearest precinct and charged with attacking officers. Only the exculpatory evidence of the video freed him – bruised and swollen, almost beyond recognition.And who does not remember photos of police dragging haredi yeshiva boys by their side-curls at sit-ins against archeological digs near purported ancient grave sites?Religious girls, as young as 12, have been punched around, dragged and arrested while standing at the sidelines of settler protests. They were then strip-searched as if there were any cause to suspect they were hiding contraband drugs in bodily cavities.There is something very wrong with our police and this is aggravated by the apparently ever-increasing corruption at the highest echelons as well as rampant sexual misconduct in all ranks.Sometimes the various ills coalesce in leadership figures who dictate the aggressive tone.
Former Jerusalem District head Asst.-Ch. (ret.) Nisso Shaham is a case in point. In October 2013, he was dismissed from the force after a slew of accusations that included sexual assault. He is currently on trial. But he should have never been appointed to his position after he publicly exhorted officers to violence during the 2005 pre-disengagement mass-rally at Moshav Kfar Maimon.
Then-Negev District commander Shaham affected his most macho pose for TV crews, well-aware that the orders he barked to young subordinates would be widely broadcast.“I want arrests and I tell you to use water cannons unconditionally,” he hectored. “Don’t call me. Go for the water cannons. I know these haredim. Shit upon them. They should burn. Don’t think twice – use water cannons and clubs. Hit them hard on the lower parts of the body. Work as you know how. I’m an expert in handling these haredim... I’m not some whore who opens her legs and waits for someone to come in. You can bank on my ability to open their [the protesters’] legs. I’ll f*** their mother’s mother. Now go tell your buddies... Not just a few beatings. I’m telling you all this to spare you the need to seek authorization.”
Shaham should have been sacked right then and there. Instead, he was promoted. This per force seemed to endorse to his bluster and bullying.All the while, serving and protecting the public appears to drop ever-lower on our law-enforcers’ scale of priorities.
The first step in overhauling police attitudes must be to make individual officers criminally and financially liable for their misdeeds. Cops who attack innocent members of the public – of whatever background – cannot be seen to be getting away with a slap on the wrist.