Power to the people

Israel poised to become a superpower of goodness in Africa. 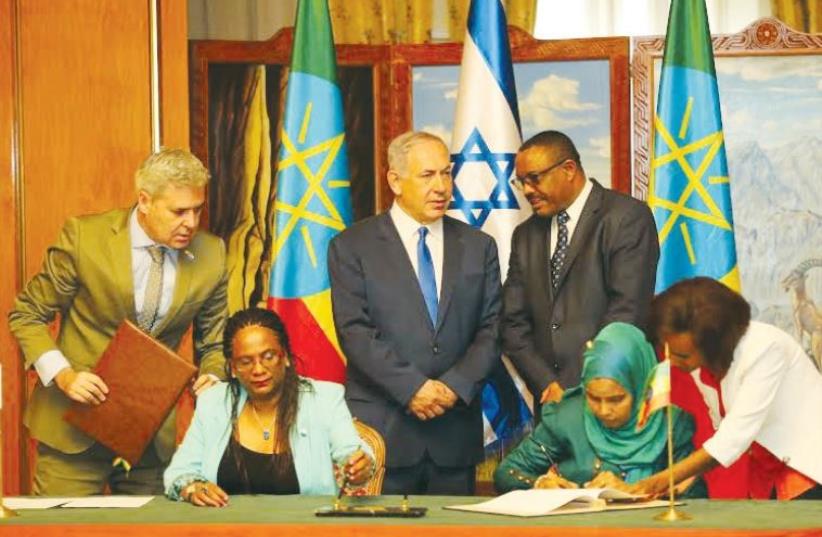 Prime Minister Benjamin Netanyahu and Ethiopian Prime Minister Hailemariam Desalegn preside over the signing of mutual agreements between Israel and Ethiopia, with Israeli Ambassador to Ethiopia Belaynesh Zevadia (seated left)
(photo credit: FOREIGN MINISTRY)
Advertisement
Breaking protocol and unsettling his security detail, Prime Minister Benjamin Netanyahu waded into the crowd of Christian Kenyan Friends of Israel, hand extended to an energized crowd. He was quite literally recharging, by tapping into a sea of outstretched hands and an undercurrent of unconditional love and support and admiration for him – “our hero,” they said – and for Israel.The confluence of story lines – personal and diplomatic – has created a unique commercial opportunity for Israel-related businesses. In Africa especially, deal-making is about the speed to trust. The continent is littered with broken promises, unfulfilled MOUs, dashed expectations and sub-par work driven by low-cost tenders and contenders. Looking someone in the eye, shaking their hand and making promises is as much a human activity as it is a business or diplomatic one. When we did it in Rwanda, building East Africa’s first commercial solar field, we kept our word, as Israelis, as Jews and as fellow citizens of a planet buckling under climate change. Kenya and Ethiopia, among others, have seen their share of charlatans and amateurs, in energy and in other fields.But at the end of our key government meetings, the eyes were trusting, the handshakes those of allies and the plan forward clear as day.Prime Minister Benjamin Netanyahu instructed the Israeli delegation to “invest in Kenya” and “invest in Ethiopia.” The president of Kenya promised to do everything necessary to de-risk and facilitate those investments, and the Ethiopian prime minister was similarly enthusiastic.The momentum created was palatable and genuine. Whether or not the deals made will actually be realized is still an open question, but since previous visits to the region over the past several years exploring solar energy opportunities, something had definitely changed.The emotional dimension was strongest when, in introducing the prime minister to the Christian group, the moderator, on behalf of Africa, apologized for the killing of his brother, Yonatan Netanyahu, on African soil. Netanyahu, cold and calculating in Israel, was caught by surprise. His face softened, he looked down to avoid losing control and was clearly moved. Hearts had already been softened by the blasts of the shofars that accompanied the entrance of the prime minister, four Kenyan men in tallitot and three women hailing the coming of the protector of the Holy Land.For all the Christian and humanitarian good will, it’s all about fighting terrorism. It’s all about Yoni. All the rest is commentary.Traffic in Nairobi can be challenging.Yet our ride from the conference hotel to the airport had the feel of a royal entourage zipping through the main thoroughfare. Police and the military blocked all traffic for miles for our convoy, with thousands of Kenyans standing along the route watching us speed by, as Israeli and Kenyan flags flapped in the wind.It was meaningful for me to see former Knesset members Addisu Messele and Shlomo Mula, both Ethiopian activists who graduated to representing Israeli companies in Ethiopia. And Avraham Neguise, chair of the Knesset Aliya and Klita Committee, as well as former MK Pnina Tamano-Shata, representing us proudly. Kudos to the Foreign Ministry for having the vision to name an Ethiopian Israeli, Belaynish Zevadia, our ambassador, and Serkalem Adigeh economic attaché.One of the key reasons Africa is opening up to Israel is because many more African leaders today actually care about providing for their people and lifting them out of poverty.With seven out of the 10 fastest growing economies on the planet, Africa’s growth means millions of people each year are being lifted out of poverty.What Africa longs for, in addition to security, is food, water and green energy. Israel excels at all these and is quietly poised to become a superpower of goodness.The prime minister tapped into and nurtured a growing wave of pragmatism among African leaders, who want to see results quickly. The only downside of such a successful mission is that expectations now have been raised. It behooves the Israeli government and the private sector to promptly fulfil the many promises we made to our African counterparts.The Israel Export Institute did an exceptional job matching us with our African counterparts. Gigawatt Global Wind co-founder Ilan Goldstein and I were swamped with opportunity at every turn, from solar to wind to off-grid projects.We must differentiate our work in Africa from others by emphasizing the development agenda. If we, like the Chinese, are there to swoop in and take deals without benefiting the country, then we would be betraying the spirit of Golda Meir and David Ben-Gurion, who saw in Africa a place where Israeli and Jewish values can be expressed while also advancing our strategic interests. And we have a magic opportunity as a community to link the Ethiopian Jewish campaign in Israel to Israeli strategic and commercial interests in Ethiopia, by training, providing scholarships and work positions for Ethiopian Israelis to staff and manage the deals that will hopefully now come to fruition as a result of the prime minister’s energizing visit last week.The author, winner of Israel’s Green Globe and CEO of Energiya Global Capital, also served on the Israeli team at the Paris Climate Conference. He can be followed @KaptainSunshine.