The haredi ministers make no pretense of their contempt for fellow Jews of the Conservative or Reform persuasions. 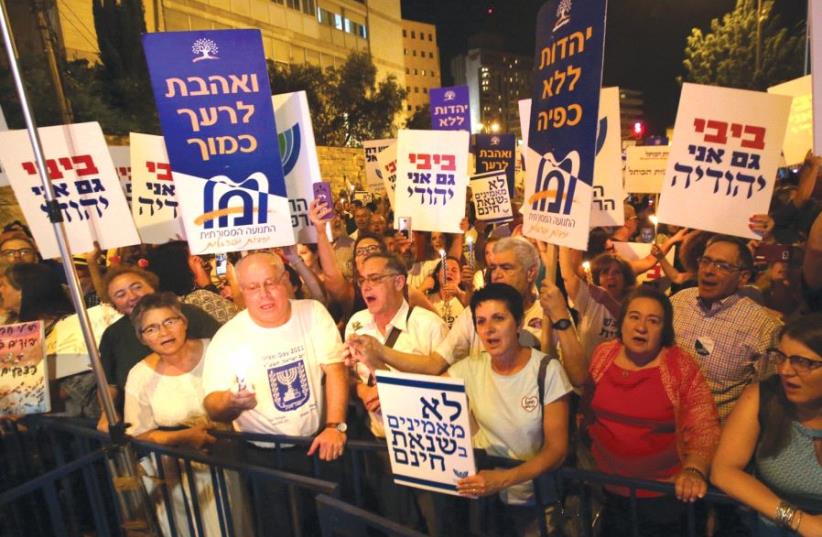 A demonstration held on Saturday outside the Prime Minister’s Residence in Jerusalem against the overturning of the Western Wall agreement and the contested conversion legislation
(photo credit: MARC ISRAEL SELLEM)
Advertisement
Nearly two years have passed since the cabinet began its journey further rightward by maneuvering around the High Court of Justice and pursuing the monopolization of religious law in our stalwart sole democracy of the Middle East.The ultra-Orthodox Shas and United Torah Judaism parties have unashamedly sought to roll back a conversion law that would have helped some 360,000 immigrants from the former Soviet Union – and their children – to convert to Judaism with dignity and become fully integrated as Israeli citizens.It doesn’t matter that the High Court’s ruling refused to recognize the unholy status quo and forced the state to recognize private Orthodox conversions in Israel. The response of our ministers was to propose their own violation of this obsolete and ill-considered concept by giving the Chief Rabbinate the monopoly on conversions in Israel.In keeping with traditional governmental practice, Prime Minister Benjamin Netanyahu sought to please everyone by appointing a committee to delay and thereby avoid having to make a decision. A month has gone by, however, and Netanyahu has yet to appoint its members, let alone schedule another discussion.The haredi ministers make no pretense of their contempt for fellow Jews of the Conservative or Reform persuasions.They acted in response to a High Court petition submitted by the progressive Jewish movements, which they fear would result in granting Israeli citizenship to non-Orthodox converts.The United Torah Judaism chairman, Health Minister Ya’acov Litzman, and UTJ MK Moshe Gafni have told the press that they have not yet been contacted by the Prime Minister’s Office regarding such a committee.Yizhar Hess, director of the Masorti (Conservative) Movement in Israel, responded by saying, “A month has already passed with no signal from the Prime Minister’s Office about the conversion bill. We do not see that there has been a serious attempt to put together such a committee.”Speaking on behalf of all progressive Jews, Hess declared, “It’s obvious that we will not relinquish our right to convert in Israel. It’s part of the basic principle of the Jewish state that all streams will feel at home in Israel.”Yesh Atid MK Elazar Stern, a longstanding advocate of greater flexibility in the practice of conversion, said it was obvious “from the beginning that Netanyahu prefers to preserve his coalition at the cost of the deepening rift with the Jewish Diaspora.“It’s clear to any intelligent person that the establishment of this committee by the prime minister was designed to stall,” Stern added. “Unfortunately, this time the harm the government of Israel has caused to Diaspora Jewry has continued, and the disconnect between the country and its Diaspora has widened, in particular among the younger generation, harm which will make it harder for us to repair.”The haredi bill endorsed by the cabinet would refuse to recognize converts whose commitment to Judaism was made outside the purview of the rabbinate’s State Conversion Authority, denying them citizenship and registration as Jews by the Interior Ministry. This would not only apply to Reform and Conservative conversions, but also to Orthodox conversions performed by independent Orthodox rabbinical courts.Rabbi Gilad Kariv, director of the Reform Movement in Israel, said the cabinet’s approval of the bill for Knesset debate means that the government has turned against “not only Reform and Conservative Jews, but also against anyone who believes in moderate and welcoming Judaism and the Zionist vision of an ingathering of exiles.”Perhaps the closest suggestion of an approach to ending this unconscionable delay in converting the conversion committee to action lies in the observation by Yisrael Beytenu leader and Defense Minister Avigdor Liberman that the bill is “an attempt to change Israel from a Jewish state to a state of Jewish law.” He said Yisrael Beytenu would not vote for the conversion bill in the Knesset.The time to stop this regressive bill is now, before politicians on the elusive conversion committee have a chance once again to exploit thousands of converts as pawns in the political game Israelis cannot stop playing.