Reality Check: Enemies of the state

"Whenever possible, this government always thinks the worst of Israel’s Arab citizens." 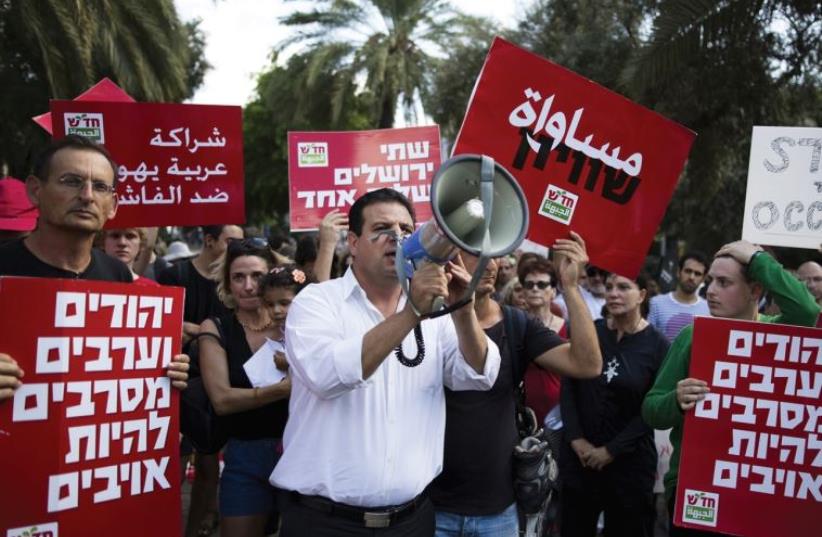 JOINT LIST leader Ayman Odeh leading a protest march in October
(photo credit: REUTERS)
Advertisement
In an ideal world, instead of writing a mealymouthed Facebook post raising the possibility of apologizing for his actions, Public Security Minister Gilad Erdan would be composing a letter of dismissal to Police Commissioner Roni Alsheich and, immediately afterwards, his own letter of resignation. And, in this ideal world, should Erdan refuse to do so, Prime Minister Benjamin Netanyahu would step in and sack them both, stressing that the political and professional leadership of the Israel Police cannot be comprised by men who are too quick to jump to racist conclusions.But of course, except for Erdan posting on Facebook, none of the above will happen. When an Israeli-Arab citizen is killed by police gunfire, in today’s climate there is no crime in being quick to denounce the victim as an Islamic State terrorist before a detailed investigation has been conducted to see whether this was in fact the case.The incident during last month’s house demolitions in the unrecognized Beduin village of Umm al-Hiran was truly tragic. Yacoub Abu al-Kaeean was killed by police fire as he drove away from the scene of the demolitions and, after these shots were fired, his car then plowed into nearby policemen, killing a young police officer, Erez Levi. The official report on the incident has not yet been released, but it seems that the Justice Ministry’s Police Investigations Department (PID) is expected to announce that Kaeean did not deliberately drive into Levi during the incident.But neither Erdan nor Alsheich were prepared to wait for the full report. Rather than calm the atmosphere surrounding this botched operation, and check whether the initial police reports from the scene were accurate (past experience of police cover-ups has shown that this is not always the case), both men were eager to label Kaeean a terrorist.Alsheich was even quick to promote Kaeean’s guilt by association: “Everyone knows that the terrorist served as a schoolteacher where there had already been six teachers arrested who chose to teach the ideology of Daesh [Islamic State, or ISIS] instead of the curriculum of the Education Ministry,” while Erdan chose to blindly support the police. In a Knesset discussion some days after the incident and while the PID investigation was taking place, Erdan said “before everything else, [I] back up completely my personnel who are out there. We are talking here about an illegal settlement and a terrorist driver who should not have driven into the policemen.”This rush to condemn, and the need to label Israeli Arabs a fifth column, seeking to bring about the country’s destruction, is a common theme of the current Netanyahu government. Remember the forest fires of last autumn? Rather than look for some rational explanation for the blazes, Netanyahu himself fanned the flames of incitement, immediately labeling the fires as “arson,” and accusing “terrorists” of seeking to “engulf our country with hate.”Other right-wing leaders were quick to pour oil on the burning piles. Education Minister Naftali Bennett also blamed Arab “fire terrorists,” saying that “only someone who this land does not belong to would be capable of setting fire to it,” the implication being that Arabs were responsible for the fires because they do not have any attachment to the land. Erdan, meanwhile, showing his total disregard for proper procedure, as later evidenced by his handling of the Umm al-Hiran incident, called for the demolition of homes of any Arab found guilty of arson.Now, some months later, no one has yet been arrested and charged with nationalistically-inspired arson. True, there were a few arrests early on, but on closer investigation these allegations of “terrorist arson” were quickly dampened down. One group of teenagers indicted for setting fires in woodlands were viewed as pyromaniacs and pranksters by a judge, while another person, Ali Mahajneh, was released after it was determined that he set fire to piles of garbage in Umm el-Fahm in protest at the lack of proper trash collection in his home town. And the police also outdid themselves in this period too, arresting journalist Anas Abudaabes on suspicion of inciting arson when he had in fact written a satirical post criticizing those who were celebrating the fires.The ease with which Netanyahu, his government, and, in the case of Yacoub Abu al-Kaeean, the Israel Police, seek to stigmatize Israeli Arab citizens as enemies of the state, while failing to address the discrimination faced by 20% of Israel’s population, is a mark of shame which even a proposed Facebook apology is not enough to remove.