Right From Wrong: A map of the next failed ‘peace’ talks

Will Trump follow in the footsteps of his shameful predecessor and hold Israel responsible, or will he realize he’s been duped? 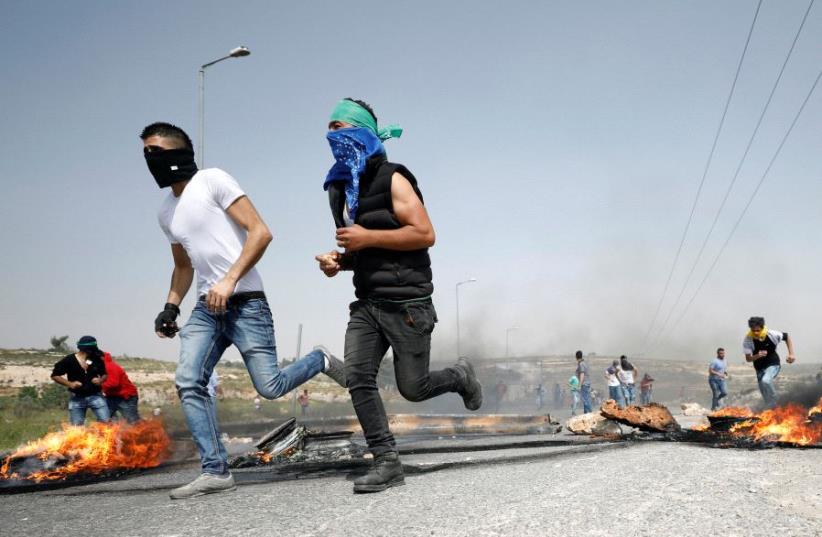 Palestinian protesters run during clashes with Israeli troops at a protest in support of Palestinian prisoners on hunger strike in Israeli jails.
(photo credit: REUTERS)
Advertisement
As part of US President Donald Trump’s trip to Israel and the Palestinian Authority on May 22-23, he will meet with PA President Mahmoud Abbas in Bethlehem. It will be the second time this month that the two leaders have sat down to discuss the impasse in the peace process; the first took place at the White House just over a week ago.During their chat in Washington, Abbas fed Trump his usual lies. Among these was the claim that Palestinian children are raised to be tolerant and peace-loving. That the US president did not burst out laughing at this absurdity is more a function of his being new on the job than having good manners. It is also due to his belief that he will be able to apply the “art of the deal” to the Israeli-Palestinian context and broker a successful agreement.Trump will soon learn, however, that his methods will not work. Even a business deal cannot be forged when the true aim of one side is failure. Indeed, it is precisely the lack of Palestinian statehood that has been Abbas’ meal ticket internationally – and the only thing that has kept him the least bit relevant at home. Well, that and cultivating, honoring and paying the salaries of terrorists.In fact, as Palestinian Media Watch (PMW) revealed Wednesday, while Abbas was sitting in the Oval Office, his Fatah faction was openly lauding suicide bombers and other murderers of Jews.On its official Facebook page on May 3, Fatah sent “blessings” to 12 of the “heroic prisoners” currently hunger-striking in Israeli prisons. According to PMW, these included Abbas al-Sayid, mastermind of the infamous suicide bombing at a Passover Seder at the Park Hotel in Netanya, and Marwan Barghouti, who is serving five life sentences for orchestrating several deadly attacks. This did not prevent him from being reelected to the PA parliament from jail, however; on the contrary, it made him even more popular. In an embarrassing twist this week, Barghouti was caught on camera sneak-eating a candy bar and cookies, as he continued to egg on other prisoners to starve themselves.There is nothing novel about the glorification of terrorists in the PA or about the hypocrisy of killers like Barghouti. Nor is it new for an American administration to fantasize about finding the magic formula for bringing about Palestinian peace with Israel. But it is interesting that Abbas reportedly requested of Trump that the starting point of any new talks be based on the parameters of his negotiations with prime minister Ehud Olmert in 2008. He also was said to have presented the US president with maps and other documents related to Olmert’s offer, which involved a nearly complete Israeli withdrawal from the West Bank and east Jerusalem. It was an offer – as Abbas acknowledged for the first time in an interview with Israel’s Channel 10 in 2015 – which he flatly refused.During the interview, which appeared in a three-part series about the peace talks between PLO chief Yasser Arafat and prime minister Ehud Barak in 2000 and those between Abbas and Olmert eight years later, Abbas made the preposterous statement that one of the reasons he rejected the deal was because he didn’t understand Olmert’s map. Apparently, he has been boning up on his cartography ahead of the next round of bad-faith negotiations that will be marked by and culminate in Palestinian violence.The only question now is how Trump will respond to the inevitable failure of such negotiations, if they take place at all. Will he follow in the footsteps of his shameful predecessor and hold Israel responsible, or will he realize he’s been duped? Let us hope it is the latter.The writer is an editor at the Gatestone Institute.