RIGHT FROM WRONG: A tale of two young women

Comparing this late-teen-early-adulthood reality with that of Hadar’s American counterparts requires a stretch of the imagination and a sense of satire. 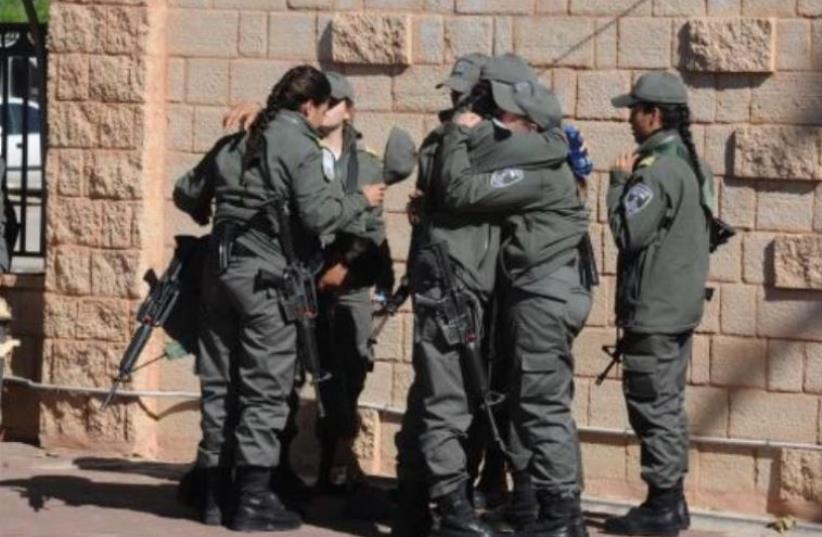 Border Police officers mourn at the funeral for slain coporal Hadar Cohen, February 4, 2016
(photo credit: AVSHALOM SHOSHANI)
Advertisement
This week, a beautiful young Israeli woman lost her life serving her country. Hadar Cohen, the 19-year-old heroine killed in the line of Border Police duty, died from wounds she sustained in a terrorist attack on Wednesday afternoon.Two weeks earlier, her parents had beamed with pride at the swearing-in ceremony that marked the successful completion of her basic training. On Thursday, they were weeping over her freshly dug grave at a military cemetery.In spite of being new to the job – made particularly daunting by the surge in Palestinian terrorism that has swept the Jewish state since September – Hadar acted both professionally and swiftly. Not only did she literally and figuratively take a bullet for her unit and the innocent Israeli civilians whom the three terrorists had come to slaughter with knives, guns and pipe bombs, but she managed to shoot at them in the process. It was this, apparently, that saved a fellow female Border Police officer, who was wounded in the attack, from certain death.Though Hadar will be remembered for her special bravery, her story is not unique. It is the common course that the life of her peers takes after high school. We only hear about those individuals who become unwittingly famous for being buried before getting a chance at life, enabling countless civilians to go about their business in peace.Comparing this late-teen-early-adulthood reality with that of Hadar’s American counterparts requires a stretch of the imagination and a sense of satire.Take the case of Yale University student Jencey Paz, whose own fame was gained through having her feelings hurt by an associate master at her college.Right around the time when Hadar was going over a checklist of items she’d need to pack before entering the IDF, Jencey was gearing up for Halloween.Don’t laugh. Selecting a costume is no small matter these days on US campuses, where anything a student or faculty member says or does can and is interpreted as racist, sexist or – the ultimate no-no – “uninclusive.”College administrators and other staff, therefore, actually invest time and energy in the pursuit of pertinent guidelines ahead of the October 31 holiday.Playing dress-up, it seems, is not what it used to be – you know, fun for some, ridiculous or pointless for others.So it was with great horror – not the haunted-house variety that Halloween typically involves – that Jencey and her classmates received a message from the associate master of Yale’s Silliman College (in this case, the wife of the master, charged with setting the intellectual, social and ethical tone of the institution) telling them that they were at liberty to wear whatever costumes they wanted.Her assertion that students could and should be trusted to make their own decisions on this score was a response to an e-mail sent out by Yale’s Intercultural Affairs Committee, urging students to be “culturally sensitive” when choosing Halloween garb.Outraged over being told she and her classmates were free to dress themselves – and even more incensed by the college master’s willingness to debate them on this point – Jencey was spurred to write an op-ed for the Yale Herald called “Hurt at home.”She was upset that he had had the nerve to disagree with her view that students should be forced to be “culturally sensitive.”“I don’t want to debate. I want to talk about my pain,” Jencey wrote on November 6, a week after Halloween. “I have friends who are not going to class, who are not doing their homework, who are losing sleep, who are skipping meals, and who are having breakdowns.”To illustrate the justice of her position, Jencey added: “My dad is a really stubborn man. We debate all the time, and I understand the value of hearing differing opinions. But there have been times when I have come to my father crying, when I was emotionally upset, and he heard me regardless of whether or not he agreed with me. He taught me that there is a time for debate, and there is a time for just hearing and acknowledging someone’s pain.”After being called to task by a number of conservative columnists for her whining, Jencey requested that her piece be removed from the Yale Herald site and that her name not be mentioned in its subsequent defense of her pathetic display. Of course, her request was respected.Ultimately, Jencey didn’t even have the courage to stand behind her own words. Meanwhile, across the ocean, Hadar was donning a uniform and learning how to use the weapon with which she would end up preventing three Palestinians from committing the mass murder of Jews.The author is the web editor of The Algemeiner (algemeiner.com) and a columnist at Israel Hayom.