Right From Wrong: Let’s not emulate the Left

Sanders promptly and properly denounced the violence and distanced himself from the culprit. 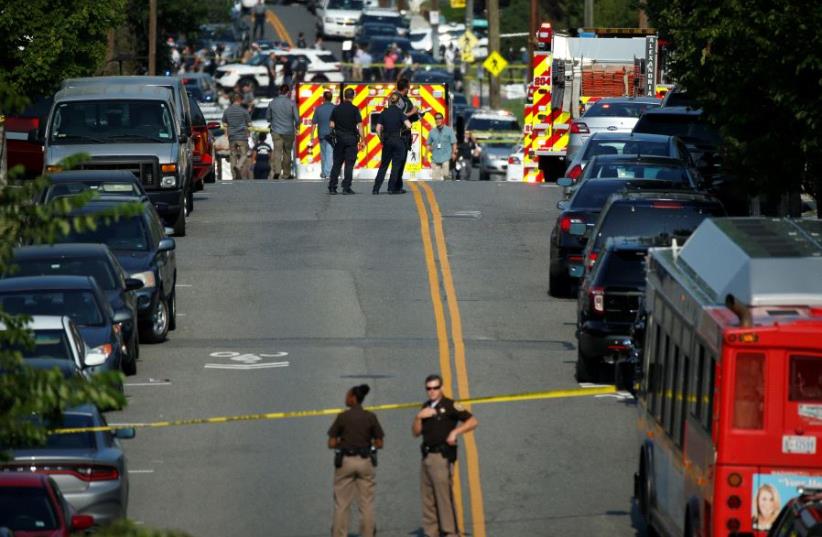 Police man a shooting scene after a gunman opened fire on Republican members of Congress during a baseball practice near Washington in Alexandria, Virginia, June 14, 2017
(photo credit: REUTERS)
Advertisement
As soon as details about the shooting spree at a baseball field in Virginia last Wednesday morning began to emerge, social media lit up with political arguments. Before it was established that 66-year-old James T. Hodgkinson had arrived at the venue with the intention to kill members of the Republican Party, the heated debate focused on the assault rifle and pistol used in the attack, and the pros and cons of gun control. When the identity and motive of the perpetrator became clear, the fights took a turn for the worse.Conservatives experienced a touch of schadenfreude at the realization that perpetrator was a left-wing activist – a supporter of Bernie Sanders, the candidate in the Democratic Party’s primaries defeated by Hillary Clinton – with boundless hatred for US President Donald Trump. Until now, the Right in America has been put on the defensive, accused of everything from racism to wanton disregard for the environment. That Hodgkinson was a member of the “enlightened” camp, which not only purports to have a monopoly on goodness but considers gun ownership a crime in and of itself, was a source of deep embarrassment. Sanders promptly and properly denounced the violence and distanced himself from the culprit.Trump and members of Congress, many of whom were present during the shootings, also have been acting responsibly. House Speaker Paul Ryan announced, “We are united in our shock. We are united in our anguish. An attack on one of us is an attack on all of us.”Facebook and Twitter users have been less noble, with Trump supporters attributing the truly vile atmosphere created by disgruntled voters, particularly prominent celebrities, to Hodgkinson’s rampage.They have been highlighting such statements as that made by movie star Robert De Niro, who said in a pre-presidential election video that he’d “like to punch Trump in the face,” and the disgusting shenanigans of comedian Kathy Griffin, recently disgraced for parodying an Islamic State-like beheading of the president.Though these critics are justifiably appalled at the escalating viciousness of anti-Trump rhetoric – which is aimed not only at the president himself, but at anyone who defends him – they need to be very careful when it comes to castigating an entire political camp for the actions of a deranged man with a history of physical abuse.One key principle that sets conservatives apart from liberals is individualism. This is why we tend to support a free market, free speech and school choice, while rejecting the notion that fast-food chains cause obesity or that guns commit murder. This is not to say that we ignore the power of culture on society. On the contrary, it is the source of much of our angst and the cause of many of our ideological battles.However, as a right-winger in Israel whose political position was held accountable for the climate that led to the assassination of prime minister Yitzhak Rabin 22 years ago, I cannot in good conscience join the choir of my current American compatriots doing to the other side what was done to mine.When fanatical Israeli ideologue Yigal Amir pulled the trigger on November 4, 1995, his bullet not only ended Rabin’s life, it granted the Left what it loves most – the moral high ground. Prior to the assassination, anyone who opposed the Oslo process – which magically transformed arch-terrorist Yasser Arafat into a legitimate “peace partner” – was branded a war-monger. Afterwards, we were all told to engage in “soul-searching” for our contribution to Rabin’s death.Mere hours after his funeral, Rabin’s widow gave a TV interview in which she implicated then-opposition leader Benjamin Netanyahu and his Likud Party followers. “There definitely was incitement which was strongly absorbed and found itself a murderer, who did this because he felt he had the support of a broad public with an extremist approach,” Leah Rabin said.Her words unleashed a storm in the Knesset, particularly on the part of Labor Party members joining in the finger-pointing. Netanyahu rebutted: “These attempts... to say it’s the responsibility of the Likud are like asking whether [US president John F. Kennedy assassin] Lee Harvey Oswald was a Republican or a Democrat and then blaming the party.”It is thus especially chilling to note that before opening fire on so many innocent people practicing for the annual Congressional Baseball Game, Hodgkinson asked two players on their way back to Capitol Hill whether the politicians on the field were Republicans or Democrats.The lesson here is that we must not emulate the Left.Rather than censuring Democrats for Hodgkinson’s crime, let us wish him ill in hell, before getting on with the business of making our case intelligently and allowing the ballot box to do the rest.Remember: Trump won the US election in November, and Netanyahu has been the longest-sitting Israeli prime minister in Israel’s history.

The writer is an editor at the Gatestone Institute.
Advertisement
Subscribe for our daily newsletter