McMaster’s ideological differences with Trump became apparent from the minute he accepted the offer to replace Gen. Michael Flynn in the role of national security adviser. 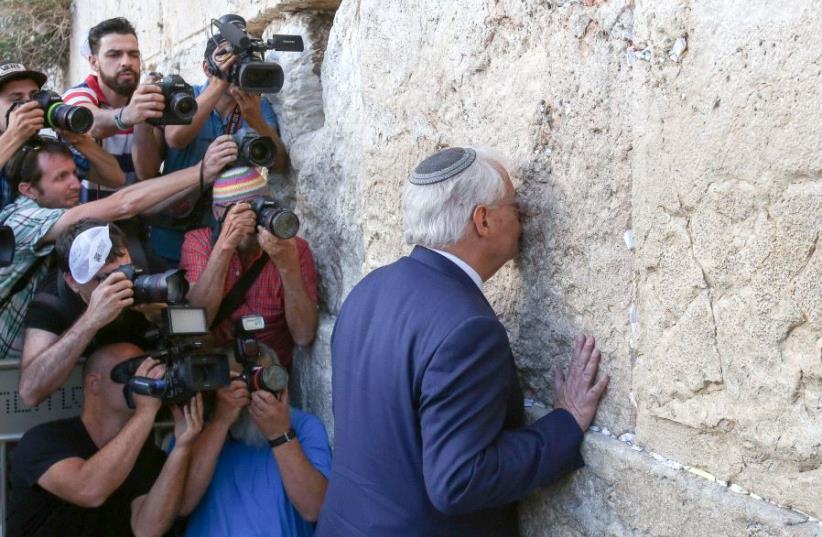 US Ambassador David Friedman at the Kotel
(photo credit: MARC ISRAEL SELLEM)
Advertisement
In a press briefing at the White House on Tuesday – ahead of US President Donald Trump’s trip to Saudi Arabia, Israel and Europe – National Security Adviser Lt.-Gen. H.R. McMaster stammered when asked by a journalist if his boss believes that the Western Wall in Jerusalem is “part of Israel.”“Part of what? I’m sorry,” McMaster replied, leaning forward, as if he had not heard the question. He did, however, answer the first half of the query: about whether Prime Minister Benjamin Netanyahu will be accompanying Trump on his visit to the Jewish holy site in the Israeli capital.“No... I don’t... no Israel leaders will join President Trump to the Western Wall. He’s going to the Western Wall mainly in connection with the theme to connect with three of the world’s great religions. And to advance, to pay homage to these religious sites that he’s visiting, but also to highlight the theme that we all have to be united against what are really the enemies of all civilized people. And that we have to be joined together in a... in a... with an agenda of, of tolerance and moderation....”This was his first evasion. His second came a few minutes later, when a different reporter pressed him to answer the original question about whether the US administration considers the Western Wall part of Israel.“Oh, that sounds like a policy decision, for, for... and you know, uh...” he said, laughing uncomfortably. “And that’s the president’s intention... the president’s intention is to visit these sites to highlight the need for unity among three of the world’s great religions.”McMaster’s refusal to state that the Western Wall is Israeli was highly significant, as it came in the wake of a scandal surrounding the issue. A day earlier, two officials from the US consulate in Jerusalem – later named as Obama administration leftovers David Berns and Jonathan Shrier – snapped at the Israeli team assisting in the preparations for Trump’s visit for asking about the possibility of Netanyahu and/or local film crews accompanying the president to the holy site, saying: “It’s none of your business. It’s not even part of your responsibility. It’s not your territory. It’s part of the West Bank.”The outcry from Netanyahu’s office was quick to follow, as was a swift denial from the White House. “The comments about the Western Wall were not authorized communication and they do not represent the position of the United States and certainly not of the president,” a senior administration official told The Times of Israel.This reaction from Washington could have been expected. Shortly before the spat erupted, the first thing that incoming US ambassador to Israel David Friedman did upon landing in the Holy Land was to pray at the very place that the consular officials deemed “none of Israel’s business.”In a video released by the US embassy in Tel Aviv, Friedman said of his family, “We’re a bit tired, but we wanted to come straight to the holiest place in the entire Jewish world, the ‘Kotel Hama’aravi,’ the Western Wall.”This was not the only clue that McMaster’s dodging reflected his own political unease about Israeli sovereignty, rather than instructions from Trump. Another was the wording of the prepared statement he read at the briefing before fielding questions from members of the media: “The president will then continue on to Jerusalem, where he will meet with President [Reuven] Rivlin and lay a wreath at Yad Vashem. The president will then deliver remarks at the Israel Museum, and celebrate the unique history of Israel and of the Jewish people, while reaffirming America’s unshakable bond with our closest ally in the Middle East.” And, after “urg[ing] Palestinian leaders to take steps that will help lead to peace... [Trump] will visit the Church of the Holy Sepulcher and he will say a prayer at the Western Wall.”McMaster’s ideological differences with Trump became apparent from the minute he accepted the offer to replace Gen. Michael Flynn in the role of national security adviser. In fact, the first piece of advice he gave to the president was to delete the phrase “radical Islamic terrorism” from his February 28 address to a joint session of Congress. Thankfully, Trump did not take the advice.In his 1997 book Dereliction of Duty: Johnson, McNamara, the Joint Chiefs of Staff, and the Lies That Led to Vietnam – written as a doctoral thesis – McMaster examined the failure of the White House and Joint Chiefs of Staff to provide a successful plan to defeat the North Vietnamese Army.“The war in Vietnam was not lost in the field, nor was it lost on the front pages of The New York Times, or on the college campuses. It was lost in Washington, DC, even before Americans assumed sole responsibility for the fighting in 1965 and before they realized the country was at war,” McMaster wrote.It was precisely this kind of intellectual courage, coupled with battlefield prowess, which earned the brilliant military man bipartisan support as Flynn’s replacement. Sadly, these traits have not been on display where Israel and its radical Islamic terrorist enemies are concerned.Behind closed doors, Trump recently referred to McMaster as “a pain.” He certainly is turning out to be one.The writer is an editor at the Gatestone Institute.