Right From Wrong: Puppet mastery and the Jews

Obama agreed to a $38 billion military aid package, to cover the next decade of war and terrorism waged against Israel. 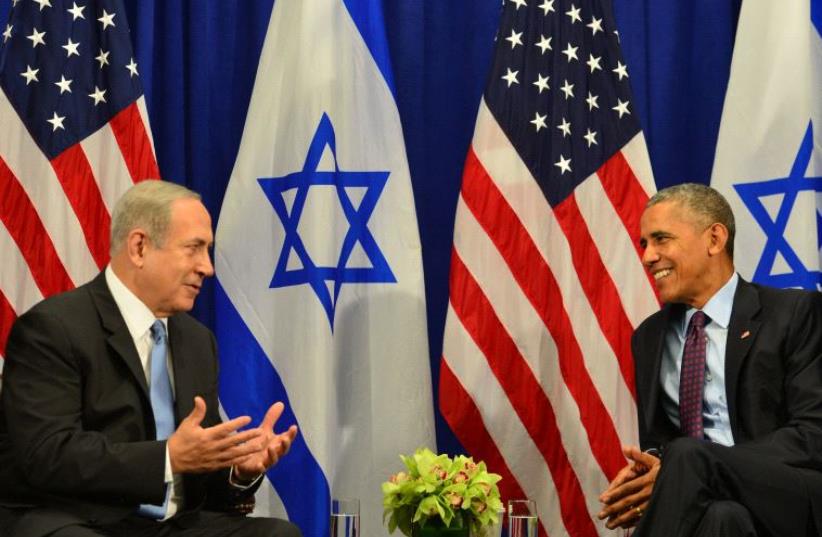 Barack Obama and Benjamin Netanyahu meet in New York on Septmber 21
(photo credit: KOBI GIDON / GPO)
Advertisement
We Jews like to quip that we only wish the antisemitic claims about our wealth and power were true. Imagining what it would be like to pull a few strings and get our way – with little effort and no spilling of our blood – is not merely a form of self-amusement, however; it is the stuff daydreams are made of, particularly during nightmarish times.Lucky for us, then, that our enemies continue to keep the myth alive.On Thursday, for example – as was reported by the research institute Palestinian Media Watch (PMW) – a cartoon appeared in the official Palestinian Authority daily that portrayed Uncle Sam holding a basketball/globe in his hands and letting Israel literally and figuratively call the shots.As PMW pointed out, this is not the first time the PA has accused the Jewish state of being behind world events. But the political caricature in question is a particular hoot, given the hostile attitude of the US administration toward Israel.Take, for example, the US State Department’s “correction” of a press release it sent out last weekend, after the funeral of Shimon Peres. The dispatch – a transcript of President Barak Obama’s eulogy – originally named the location of the speech as “Jerusalem, Israel.” A second e-mail followed, with the word “Israel” clumsily and hastily crossed out with a sharpie.The message was loud and clear: the architects of the nuclear deal with Iran do not recognize Israeli sovereignty over the capital of the Jewish state. The mullahs in Tehran, furiously developing and boasting about long-range ballistic missiles that can “flatten Tel Aviv,” were probably grinning under their turbans and behind their turbines. PA President Mahmoud Abbas – who attended Peres’s funeral to keep himself more relevant in international circles than he is at home in Ramallah – must have been equally pleased.Similar statements about Jewish- state sovereignty, or a lack thereof, have been made by America since Obama entered the White House.One was the omission of the Israeli flag on a State Department list of the addresses and phone numbers of US consulates and embassies. In addition, it has become increasingly difficult for Israelis to obtain visas with which to enter the US as tourists.(It is interesting to note here that Israel – a staunch American ally – is not among the many and varied countries with visa-waiver status.) As if all of the above were not sufficient cause for Jews, especially the Israelis among us, to chuckle at the notion that we control Washington, the Obama administration went ahead and signed the disastrous Joint Comprehensive Plan of Action (JCPOA) with a regime bent on our annihilation, despite Prime Minister Benjamin Netanyahu’s repeated pleas and warnings.Throwing Netanyahu a bone, Obama agreed to a $38 billion military aid package, to cover the next decade of war and terrorism waged against Israel. This came with a number of dangerously restrictive conditions, however, including a commitment by Netanyahu not to request an additional nickel before the 10 years are up. You know, just around the period when Iran will be free to nuke Tel Aviv.Yes, it’s during times like these that Jews have no recourse but to resort to humor, black as it may be. We might like to brag about how we excel at everything from Talmudic scholarship to high-tech innovation, but we know full well that we won’t be winning any Nobel prizes for puppet mastery in the foreseeable future – no matter what “evidence” to the contrary the antisemites produce.The author is the managing editor of The Algemeiner.