Right from wrong: Soldiering on through tears

The soldier is now serving as a symbol for all sides of the dilemma that our boys and girls must face as soon as they don the uniform. 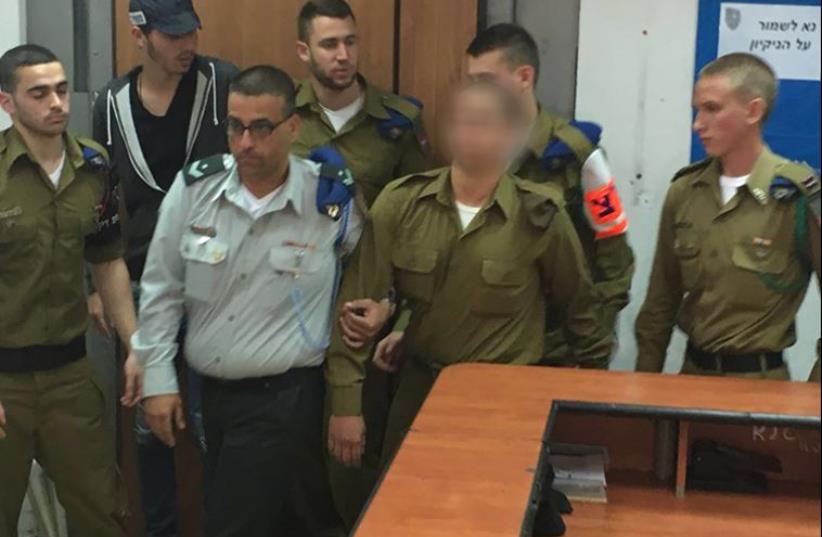 IDF soldier who shot a neutralized Palestinian terrorist in Hebron being led into court, March 29, 2016
(photo credit: NOAM AMIR)
Advertisement
Since last Thursday, when an Israeli soldier shot a subdued terrorist in the head, the issue of the IDF’s code of ethics has been debated to death. Arguments about whether the usual rules of engagement should apply to situations like those that have grown so commonplace over the past six months are not at all new in the Jewish state; they are as old as its enemies’ repeated attempts to wipe it off the face of the earth in one way or another.The current method has taken the form of a “lone-wolf intifada,” the term coined to describe a disorganized war of attrition waged mostly by young, knife-wielding Palestinians on Jew-killing rampages. That it is not deemed an official “uprising” by the Palestinian powers-that-be who encourage it passively while actively egging it on is the only thing that differentiates it from previous waves of terrorism to which Israelis were accustomed.The soldier who has become the topic of every dinner- table conversation from Metula to Eilat is now serving as a symbol for all sides of the dilemma that our boys and girls must face as soon as they finish high school and don an IDF uniform. It is impossible to know what his parents told him before he got on the bus to go off to basic training.But I admit to telling my own children, each in turn, that I’d rather visit them in a military prison than in a graveyard.That particular sentiment was born of watching my kids grow up in a society whose underlying message was that it was just as important to be armed with a law book as a gun when forced to fight enemies with no rules of engagement whatsoever. Other than useless slaughter, that is.And backing from an “international community” with extremely high double standards.Indeed, the first time I allowed my seven-year-old to walk to school by himself, a report on the radio that a terrorist was on the loose in our neighborhood sent me tearing down four flights of stairs, with babies in my arms, to make sure he was safe. As it transpired, my son had made it to his classroom – but an 18-year-old female soldier named Iris Azoulay was not so lucky. After kissing her own mother goodbye before heading to the bus stop to return to her base, a Palestinian laborer – who had worked in the area for years painting houses and the like for Jewish families he knew well – went on a stabbing spree with a 15-inch knife and slashed her to death. Right in front of her home.The terrorist, shouting “Allahu akbar,” then killed another man and wounded a 13-year-old on his way to school.At that moment, as I was still running to locate my child, Shalom (Charlie) Shlush, an off-duty member of the Israel Police’s counterterrorism unit, had just left his house with his pregnant wife in tow. Hearing the screams of the victims, Shlush drew his weapon and ran toward their attacker, yelling at him to halt. When the assailant did not comply, Shlush fired a warning shot into the air.When this did not prevent the terrorist from continuing to charge, Shlush shot him in the leg. When this did not stop him, Shlush shot him in the other leg, and he fell to the ground. Believing the terrorist to be “neutralized” and the danger over, Shlush approached to arrest him. But the terrorist had another knife, which he had kept hidden. It was with this weapon that the “subdued” stabber murdered Shlush, leaving his widow to give birth by herself before the week of mourning was even over.That was on October 20, 1990.On December 29, 2005, an IDF lieutenant named Uri Binamo was blown up by a suicide bomber in the Palestinian town of Tulkarm. Dror Zicherman, a 19-year-old soldier under his command, was critically wounded in the same explosion. On Saturday night, Zicherman wrote a Facebook post to describe that traumatic incident. He was doing this, he said, to explain why he considers the soldier held in custody over the death of a terrorist in Hebron last week a hero. Zicherman recounted the last conversation he had with Binamo before the bombing.“You are not to shoot,” Binamo told Zicherman, who had cocked his weapon and aimed it at the head of the Palestinian the two were questioning at a road block erected when a warning was received about imminent attacks on Israeli children attending Hanukka festivities. “But he is wearing a leather coat,” Zicherman protested, fearing the suspect was hiding explosives under his clothing.“You are not to shoot, period,” Binamo ordered. And Zicherman obeyed.Zicherman continued his post by saying, “The procedures... in the IDF are a joke, a very bad joke. Tell me more about how humane our army is, but before talking about the rules of engagement, remember that because of [them], Uri is gone and I remain seriously impaired and shell-shocked.”He concluded by suggesting, “Maybe it’s better to be thought of as a murderer” than the alternative. Whatever the outcome of the soldier’s trial, which the facts of the case – not public opinion or political posturing – will determine, I will shed no tears for the dead terrorist and many for the soldier who put an end to his life.The writer is the web editor of The Algemeiner (algemeiner.com) and a columnist at Israel Hayom.