Right from wrong: What I owe Jerusalem

I took Israel’s greatness for granted, without wanting to or even toying with the fantasy that I would ever live there. 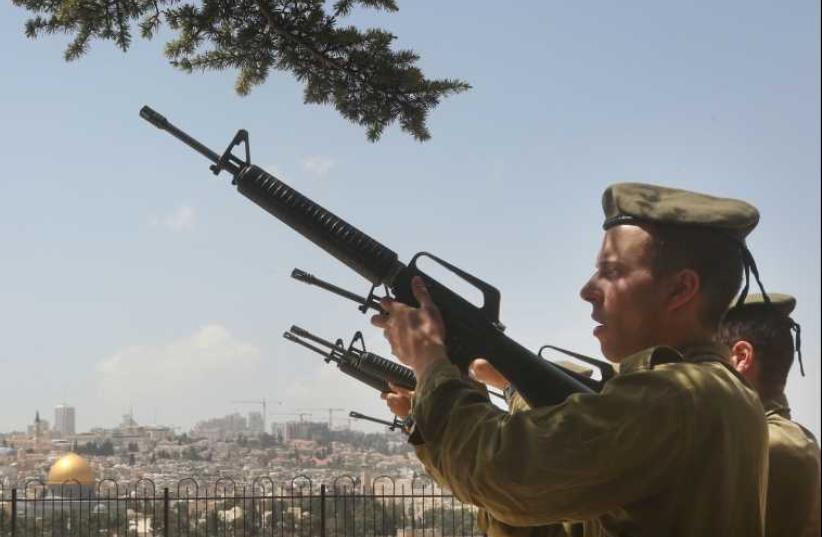 Israel's Remembrance Day ceremony in Jerusalem.
(photo credit: MARC ISRAEL SELLEM/THE JERUSALEM POST)
Advertisement
I arrived in Jerusalem from New York in July of 1977, 10 years after the Six Day War, and three weeks after Menachem Begin took office as prime minister. Young and naive, I had not realized how ideologically divided Israelis were. From afar, I had been a passionate defender of the Jewish state, but totally ignorant of its internal makeup.In spite of having devoted an elementary school paper to the Irgun Zva’i Leumi (the “Etzel” that Begin commanded), I was clueless about the genuine animosity that the underground group still elicited among huge swaths of Israeli society. It thus did not occur to me that his election was such a contentious event. I certainly did not know that he was considered a terrorist in certain circles, and as a dangerous demagogue in more moderate ones.All I knew at the time was that Israel was a country born of, built by and filled with heroes, Begin among them.This sense was only reinforced by the Entebbe raid of the previous summer.
See the latest opinion pieces on our page
While we Americans were celebrating our bicentennial of independence with extra-special fanfare and fireworks, Israeli commandos were planning and carrying out a magnificent hostage- rescue mission the likes of which the world had never seen, and has yet to witness again.For me, as a Jew, the latter immediately became of greater import. Though Israel was neither my country of birth nor my place of residence, its achievements were a source of pride. And the loss of Yonatan Netanyahu, the commander of the raid, bordered on the personal.In addition, anyone who cast aspersions on Israeli actions – something that was growing more commonplace with each passing minute after the Six Day War – was either a fool, a rightwing isolationist or a pacifist on the Left.That should have been the first sign of where my destiny lay. But I still didn’t get it.I took Israel’s greatness for granted, without wanting to or even toying with the fantasy that I would ever live there.Like reciting “Next year in Jerusalem” each Passover without really meaning it, viewing Israel as my homeland was no more than an ethereal concept.My sudden decision, then, in the midst of my studies, to spend an academic year in that homeland was not due to a religious or ideological awakening; it was simply the result of meeting a guy who told me about how he fought in the Yom Kippur War, while showing me a photo of himself in an IDF uniform. Surrounded by American- Jewish boys on my college campus who wouldn’t even walk me home after a movie for fear they might get mugged, I was done for.Nor was my choice of the Hebrew University in Jerusalem as the venue for this romantic pursuit based on anything other than the fact that my sister had studied there a few years earlier.In other words, ending up in the Holy City was one of those oxymoronic “accidents of fate” that set my life on a completely different course from the one I had imagined. And it was this supposed happenstance (the young man for whom I made the journey was not around for more than five minutes) that turned my Zionism from “top down” to “bottom up.”I was smitten. Not by the city’s breathtaking beauty. Not by its exotic outdoor markets, or the Western Wall.Not by the almost eccentric intermingling of the modern with the ancient.Not even by the hordes of gorgeous boys my age in combat gear. Though all of the above was striking indeed, it was my gut response that got to me the most. It was as though I had been suffering from nausea, and it was now gone.The shock of hearing Israelis scream at one another over the same issues of war and peace in general – and Begin’s premiership specifically – as Americans was quickly converted into relief at the realness of it all. Every party to any debate had a genuine stake in the argument. No intellectual exercises.Only true grit.It was not merely that I wanted to become a part of the discussion, or among the people engaging in it. I understood that I already was. It was not I who had returned home. It was the molecules of my being that had done so. Free will was not altogether at work.Less than two years ago, after decades in Jerusalem, I moved to Tel Aviv. The former doesn’t have a beach, after all, or wall-to-wall cafes.With grown children and employment that enabled me to make such a transition, I relocated from the capital to the coast.The joke was on me. And God has been laughing at his own punch line ever since.As soon as I had settled down comfortably in my new environment, marked among other things by a deep Mediterranean tan, I received a job offer I could not refuse – in Jerusalem.On Saturday night, the country began celebrating the 48th anniversary of the reunification of Jerusalem. I took the occasion to toast Jerusalem’s role in putting my own pieces back together.The writer is the web editor of Voice of Israel talk radio (voiceofisrael.com) and a columnist at Israel Hayom.