Rwanda and the Holocaust: A valid analogy?

The Allies could not have saved every Jew from the Holocaust. The Clinton administration could not have rescued every Tutsi. But just because you can’t save everybody doesn’t mean that you shouldn’t. 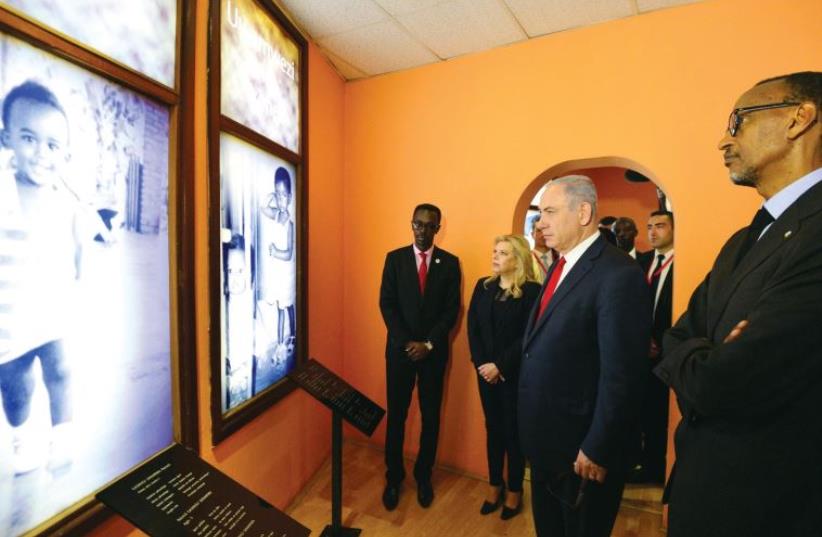 Prime Minister Benjamin Netanyahu and his wife, Sara, visit the remembrance site for the victims of the 1994 Rwanda genocide in Kigali, Rwanda, on July 6
(photo credit: KOBI GIDEON/GPO)
Advertisement
At a memorial in Rwanda to the victims of the 1994 genocide, Prime Minister Benjamin Netanyahu last week wrote in the visitors’ book that he was “reminded of the haunting similarities to the genocide of our own people.”Certainly all instances of genocide have some characteristics in common. But perhaps the most compelling analogy between the Holocaust and the Rwandan slaughter concerns the international community’s apathetic response to the news of those genocides.During the Holocaust, news of the Germans’ mass killing of the Jews was slow to reach the Free World, but Allied leaders still found out in plenty of time to rescue some of those who were targeted. The Allies publicly confirmed in December 1942 that the mass murder was under way, yet the killing continued through the spring of 1945.In the case of Rwanda, the news arrived quickly.In April 1994, machete-wielding militias of the Hutu tribe in Rwanda began carrying out the slaughter of the country’s ethnic minority, the Tutsis. Within three days, The New York Times (in a front-page story) cited Red Cross eyewitnesses reporting that “tens of thousands” had already been murdered, with corpses piled “in the houses, in the streets, everywhere.” As early as April 23, a Times editorial stated “What looks very much like genocide has been taking place in Rwanda.”The Bill Clinton administration received detailed intelligence about the mass killings from its diplomats on the scene as well as other sources. But the president did not see any compelling reason to intervene.The US wasn’t willing even to help maintain the United Nations peacekeeping force in Rwanda. Ten peacekeepers were murdered during the first days of the slaughter, and some of the sponsoring-nations wanted to cut and run. On April 12, 1994, the US ambassador to the UN, Madeleine Albright, sent a cable to the State Department, urging the US to advocate a withdrawal of all the peacekeepers except for “a skeletal staff.” There was a “window of opportunity” for UN forces to escape, Albright emphasized. But there would be no escape for the Tutsis.Later, in her autobiography and in media interviews, Albright blamed the State Department and the National Security Council for urging the withdrawal of the UN forces from Rwanda. She also falsely claimed that “we didn’t know about the massive aspect [of the killings]” at the time of the discussion about withdrawing.But recently released cables revealed the truth about her pivotal role.Tragically, US secretary of state Warren Christopher followed Albright’s advice. He threw his support behind the withdrawal proposal, and the UN Security Council voted to pull out almost 90 percent of the 2,548 peacekeepers. During the next three months, Hutu death squads slaughtered some 800,000 Tutsis.America watched in silence.We know about some of the behind-the-scenes discussions within the Clinton administration at the time, thanks to Samantha Power (who today serves as the US ambassador to the United Nations). In her Pulitzer Prize-winning 2002 book, A Problem from Hell, Power cited internal memos showing the State Department was “worried” that publicly acknowledging the Rwanda genocide “could commit [the US] to actually ‘do something.’” Susan Rice, who today is US President Barack Obama’s national security adviser, also figured prominently in those 1994 discussions. At the time of the genocide, Rice was director of African affairs for the National Security Council. According to Power, Rice remarked to her colleagues, “If we use the word ‘genocide’ and are seen as doing nothing, what will be the effect on the November [Congressional] elections?” The Allies could not have saved every Jew from the Holocaust. The Clinton administration could not have rescued every Tutsi. But just because you can’t save everybody doesn’t mean that you shouldn’t save anybody.The problem, in both cases, was not ignorance. Nor was the problem an inability to reach the victims or interrupt the killing. The problem was moral blindness: the refusal to recognize our humanitarian obligation to intervene against genocide, and the willingness to put narrow political considerations above moral responsibilities.In this sense, Netanyahu was correct. The similarities between then and now are indeed “haunting.” And they should continue to haunt us, until the day our government finally resolves to undertake a meaningful response to genocide. The writer is founding director of the David S. Wyman Institute for Holocaust Studies and author of 16 books about Jewish history and the Holocaust.