The stature of her previous positions gives her a significant platform. 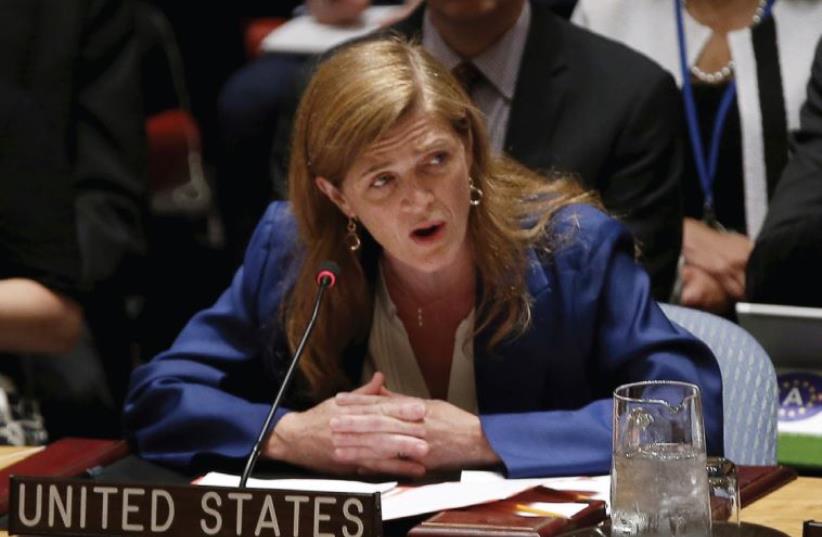 US ambassador to the United Nations Samantha Power speaks at the UN headquarters in New York on July 20
(photo credit: REUTERS)
Advertisement
The rise of Samantha Power to the position of senior adviser to US president Barack Obama gave anti-genocide activists hope that US policy toward atrocities around the world would finally change. Surely the author of a Pulitzer Prize-winning book about the history of American indifference to genocide would make it her business to put an end to such apathy. Instead, Power spent seven years defending America’s continued inaction – and now that a new president has taken military action against mass murder, Power has fallen silent.As the director for multilateral affairs and human rights on the National Security Council (starting in 2009), head of the Atrocities Prevention Board (beginning in 2012) and then US ambassador to the United Nations (starting in 2013), Power was well situated to alter the pattern of US disinterest she documented in her book, A Problem from Hell: America and the Age of Genocide.It soon became apparent, however, that even with Power in its innermost leadership circle, the Obama administration’s response to genocide would largely echo the indifference of its predecessors when faced with mass murder around the world.The administration’s refusal, from the start, to acknowledge that the World War One-era slaughter of the Armenians was genocide (despite president Obama’s explicit campaign promise to recognize it as such) was troubling. Admittedly, that disappointment involved a symbolic issue with no realworld consequences. But the decision to choose political convenience (not offending Turkey) over principle was a bad omen.Sure enough, the resumption of attacks by Sudanese government-sponsored Arab militias on non-Arab civilians in Darfur in 2010 was met by US silence, as was the wave of “mass atrocities that echo Darfur” in Sudan’s Nuba Mountains that Nicholas Kristof of The New York Times reported in 2012. The International Criminal Court indicted Sudanese dictator Omar Bashir for genocide, but the Obama administration took no steps to bring him to justice – and would not even publicly criticize the Arab and African regimes that continued to host visits by Bashir.This is not to say Power accomplished nothing during her years on the Obama team. For example, she reportedly helped convince president Obama to take part in the Allied attacks that ousted Libya’s Muammar Gaddafi in 2011, when the Libyan leader was planning to perpetrate what Obama called “a massacre that would have reverberated across the region and stained the conscience of the world.”And the Obama administration was certainly correct, in 2015, to declare that the atrocities committed by Islamic State (ISIS) against Yazidis, Christians and other non-Muslim minorities in Syria and Iraq constitute genocide – even if that acknowledgment was late and made only after strong congressional pressure. Unfortunately, it did not result in any change in the US policy of carrying out only limited air strikes against ISIS.But its response to Syria is one of the primary issues on which history will judge the Obama administration – and justifiably so, considering the magnitude of the Assad regime’s atrocities and the international chaos set in motion by the resulting waves of refugees.Obviously Samantha Power could not have single- handedly brought out about a different US policy toward Bashar Assad. But there is an obvious course of action that a government official can, and should, take if the policies of the administration she serves violate her conscience: resign in protest.That’s what Mark Siegel, president Jimmy Carter’s liaison to the Jewish community, did in 1978, rather than defend Carter’s tilt against Israel.And that’s what Walter Reich, executive director of the United States Holocaust Memorial Museum in effect did in 1998, when he opposed inviting Yasser Arafat to the museum, knowing his opposition could cost him his job.Today, Power no longer enjoys the clout of a senior adviser to the president of the United States.But that doesn’t mean she has been rendered powerless.On the contrary, the stature of her previous positions gives her a significant platform. Power can appear on any television talk show she wants. She can write an op-ed for any newspaper she chooses.So now that the new president has responded to Syria in a way comparable to what Power advocated in her famous book, why is she suddenly speechless? Why has Power’s Twitter account been silent regarding the first major US action in recent memory against a mass murderer? One can only hope that it is not Power’s disdain for President Donald Trump’s political positions on other issues that is keeping her from endorsing the missile strike against Syria. After all, the phenomenon of choosing politics over justice is precisely what Power so loudly – and correctly – condemned before she joined the Obama White House.The author is founding director of The David S. Wyman Institute for Holocaust Studies and author or editor of 16 books about the Holocaust and Jewish history.