"For 18 years I have worked to end the manipulation of building laws by army committees without Palestinian representation." 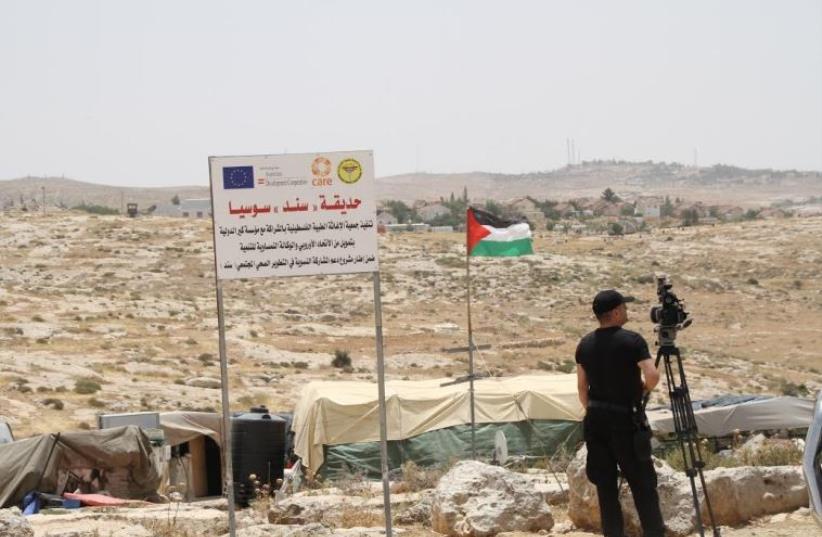 The tents of the illegal Palestinian village of Sussiya, with the Jewish settlement in the background. An EU logo is on a sign not far from the Palestinian flag
(photo credit: TOVAH LAZAROFF)
Advertisement
Last week’s High Court ruling allowing unequal, ethnically-based planning systems doomed hundreds of Area C Palestinians to having their homes demolished every year, because it is almost impossible to build legally in Area C. This decision is even more disappointing both because of implications far beyond the humanitarian tragedy of home demolitions and because the language of the final ruling belied much of what the judges themselves said in the course of two hearings. A ray of hope is that judges Rubinstein, Hendel and Sohlberg ordered monitoring of progress in planning for Palestinians over the next three years.This is personal. For 18 years I have worked to end the manipulation of building laws by army committees without Palestinian representation, leaving only one percent of Area C land zoned for Palestinian building. Rabbis For Human Rights, Diraat village and three partner NGOs argued that abolishing existing planning committees in 1971 violated the Hague Convention’s determination that an occupying power must leave existing civilian arrangements in place unless there is an overriding military necessity. The High Court applies the Hague Convention in the West Bank.In April 2014, the judges indicated they would not force the state to restore the committees. However, they were disturbed by the clearly separate and unequal planning processes, which were resulting in humanitarian tragedy. The court ordered the state to make proposals regarding how to ameliorate the situation, and repeatedly invited the state to provide statistics contradicting ours. The state didn’t contest our facts. It suggested non-binding consultations with Palestinians, while retaining absolute planning authority. In a second hearing, the visibly uncomfortable judges attempted to cajole the state into further concessions, but failed. Nevertheless, the ruling shockingly stated that we had failed to prove discrimination, or that the ability to build legally was necessary for survival.The “new” consultation procedure isn’t new, and hasn’t allowed Palestinians to build homes. In the few cases where the army’s Civil Administration (CA) plans for a village, it sometimes consults. Its legal adviser ordered consultations in 2011. However, a Bimkom report shows that plans don’t even legalize all existing homes, let alone enable development. In Diraat, only half the existing homes were included. The all-Israeli planning committee doesn’t listen very well.
See the latest opinion pieces on our page
Villages can also submit plans. They are almost always rejected. Professor Rassem Khamaisi, who has successfully planned many communities inside Israel, writes that only three of the dozens of professional plans he has submitted in Area C have been approved. He can meet and explain, but the CA does as it wishes.As the army wrote to an AFP reporter, professional plans must receive political approval.This is why Sussiya is in danger of destruction. Plia Albeck, the former government lawyer who openly did everything possible to declare Palestinian land state land, wrote in 1982 that the village of Sussiya was surrounded by 3,000 dunams (750 acres) of their lands. That year, the settlement of Sussiya was established nearby. Albeck said she couldn’t defend Sussiya’s settlers because so much of their settlement was built on Palestinian land. In 1986, the Palestinians were expelled from their homes. They moved to caves on their agricultural lands. The army expelled them again. The High Court returned them, but the army had destroyed the caves. In 2011 settlers petitioned the court to demolish the structures the villagers had built to replace their caves.RHR represented Sussiya in an additional effort to get a master plan approved.The CA ruled that it would be unfair to make them live in an isolated village without infrastructure. Electricity lines and water mains to small settlements run right by. The committee was concerned about sewage, even as raw sewage from many settlements flows openly into Palestinian fields. The real reason? A settler representative laconically commented at the hearing that it was a farce because the committee couldn’t possibly allow a Palestinian village so close to their settlement.The ruling accepted the argument that planning is a political matter to be resolved through non-existent negotiations.It believed the state that consultations were instituted last September.Actually, Israel froze Palestinian planning to punish them for joining the International Criminal Court. On several levels, the ruling legitimized making human rights conditional upon politics. A home became a matter of beneficence to be granted or withdrawn.Rabbi Samson Raphael Hirsch taught that when those with all of the power in their hands give themselves the right to determine how to be just to those not sitting at the table, it “borders on criminality.”This decision unjustifiably trusts the CA to implement what it hears in non-binding consultations, and the ability of the military to police itself. If Palestinians agree to consult, and have complaints, they can turn to the head of the CA – the same army unit responsible for consulting and planning! The three-year monitoring period offers slight hope. If done conscientiously, it will be clear after hundreds of additional demolished homes, that we were right.Perhaps genuine monitoring will lead to the change that the consultations alone won’t achieve. We are taught in Pirkei Avot 2:1, “ Reflect on three things and you will never come to sin: Know what is above you – a seeing eye, a hearing ear, and all your deeds recorded in a book.”We will be following developments in the field, and monitoring the monitors.Human rights should never be dependent on political considerations. However, now that it is obvious that the occupied territories will be under Israeli control for quite a long time, it should be clear that we need to focus not on what might be the effect of observing human rights in a hypothetical peace process, but on our obligations to human beings under our control.The author is president and senior rabbi of Rabbis For Human Rights. For identification purposes only.