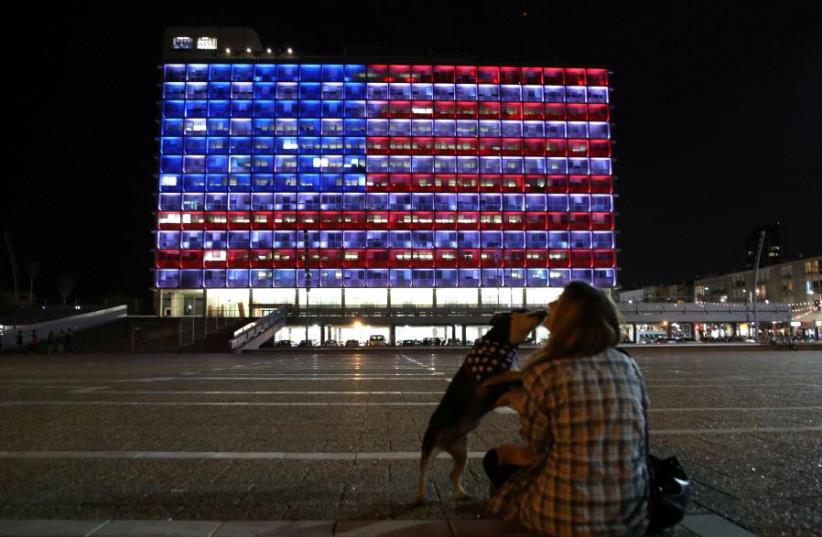 A woman plays with her dog as the municipality building is lit in the colours of the American flag on the first day of U.S. President Donald Trump's visit in Israel, in Tel Aviv, Israel May 22, 2017.
(photo credit: REUTERS/CORINNA KERN)
Advertisement
Several prominent American Zionists – including long-time supporters of Israel – are so outraged at the Israeli government’s recent decision regarding the Western Wall and non-Orthodox conversion that they are urging American Jews to reduce or even eliminate their support for Israel.According to an article by Elliot Abrams in Mosaic, Ike Fisher, a prominent member of the AIPAC board, threatened to “suspend” all further financial support for Israel. Daniel Gordis, a leading voice for Conservative Judaism, urged American Jews to cancel their El Al tickets and fly Delta or United. He also proposed “withholding donations to Israeli hospitals, so that ‘They start running out of money’ and ‘begin to falter.’” This sort of emotional response is reminiscent of the temper tantrum outgoing US president Barak Obama engaged in when he refused to veto the UN’s recent anti-Israel resolution.I strongly disagree both with the Israeli government’s capitulation to the minority of ultra-Orthodox Jews, who wield far too much influence in Israeli politics, and with the proposals to cut back on support for Israel by some of my fellow critics of the Israeli government’s recent decisions with regard to religion.I strongly support greater separation between religion and state in Israel, as Theodor Herzl outlined in his plan for the nation-state of the Jewish People in Der Judenstaat 120 years ago: “We shall...prevent any theocratic tendencies from coming to the fore on the part of our priesthood. We shall keep our priests [by which is meant rabbis] within the confines of their temples.”It was David Ben-Gurion who made the deal with the Orthodox rabbinate that violated Herzl’s mandate and knocked down the wall of separation between religion and state. He allocated to the Chief Rabbinate authority over many secular matters, such as marriage, divorce and child custody. He also laid the groundwork for the creation of religious parties that have been a necessary part of most Israeli coalitions for many years.So don’t blame Israel’s current prime minister for the recent capitulation. His government’s survival depends on his unholy alliance with allegedly holy parties that threaten to leave the coalition and bring down his government unless he capitulates.The alternative to a Netanyahu government might well be far to the Right of the current government, both on religious matters and on prospects for peace. Reasonable people may disagree as to whether Netanyahu did the right thing, but I believe that given the choice between the current government and what may well replace it, Netanyahu acted on acceptable priorities.This is not to say that I am happy with the end result. As a post-denominational Jew, I want to see a part of the Western Wall opened to conservative and reform prayer.I also want to see Conservative and Reform and Modern Orthodox rabbis deemed fully competent to perform rituals including marriage and divorce.I will continue to fight for these outcomes, and I think we will ultimately be successful.But in the meantime, I will also continue to fly El Al, contribute to Israeli hospitals, attend AIPAC events and encourage Americans to support Israel, both politically and financially. To do otherwise is to engage in a form of BDS – the tactic currently employed by Israel’s enemies to delegitimize the nation state of the Jewish People.Supporters of BDS will point to these benign boycotts as a way of justifying their malignant ones. If BDS is an immoral tactic, as it surely is, so too is punishing the people of Israel for the failure of their government to be fully inclusive of Jews who do not align themselves with the ultra-Orthodox.Tough love may be an appropriate response in family matters, but boycotting a troubled nation which has become a pariah among the hard Left is not the appropriate response to the Israeli government’s recent decisions regarding religion.The answer is not disengagement, but rather greater engagement with Israel on matters that involve world Jewry. I, too, am furious about the arrogant and destructive threats of the ultra-Orthodox parties in the current government.I, too, would prefer to see a coalition that excluded the ultra-Orthodox parties.I, too, would like to see a high wall of separation that kept the rabbis out of politics.But I do not live in Israel, and Israel is a democracy. Ultimately it is up to the citizens of Israel to change the current system. The role of American Jews is limited to persuasion, not coercion. In the end, we will be successful in persuading the Israeli people to take the power of religious coercion out of the hands of the ultra-Orthodox minority because that would not only be good for secular Israelis – who are a majority – but also for religious Israelis.History has proved that separation of state from religion is better not only for the state, but also for religion.Follow Alan Dershowitz on Twitter: @ AlanDersh and Facebook: @AlanMDershowitz.This article was first published by Gatestone Institute.