On Sunday it was a bus driver’s recklessness that resulted in the death of six and the injury of a dozen. 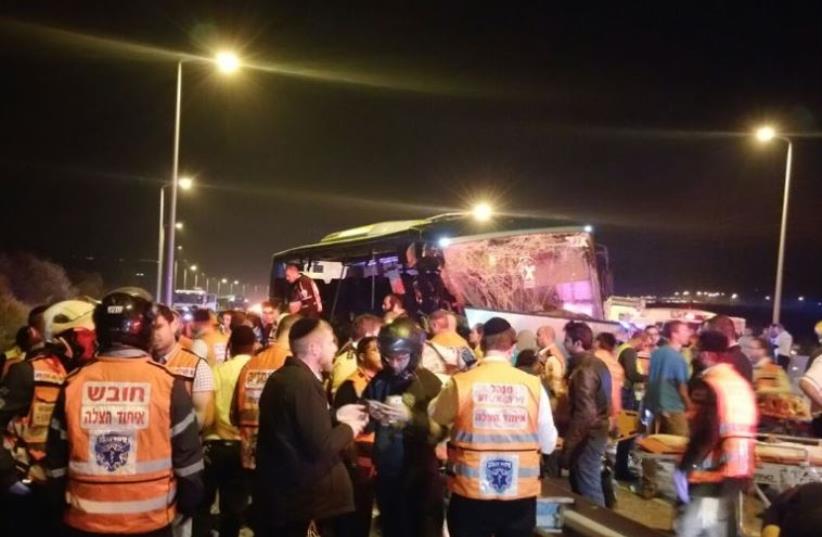 Bus accident on Highway 1 on February 14, 2016
(photo credit: MIDABRIM BATIKSHORET)
Advertisement
Sunday’s deadly collision between a bus and a truck did not have to happen. While each road tragedy has its own specific causes, nearly all of them share one thing in common – they could have been prevented.On Sunday it was a bus driver’s recklessness that resulted in the death of six and the injury of a dozen.At about 6:30 pm the 402 bus packed with passengers making their way from Jerusalem to Bnei Brak rammed into a truck parked on the side of the road.A crane positioned on the truck’s flat back ripped the bus open, injuring and killing passengers.Apparently, the driver did not notice the truck as he swerved out of his lane. Witnesses who ride the 402 bus line, which traverses Highway 1, said that the driver is known for his recklessness. In 2013, the same driver smashed into a truck and overturned the bus he was driving on the same highway.But while Sunday’s crash was particularly horrific and was probably caused by the carelessness of a single person, it should serve as a wakeup call.Over the past few years there has been a gradual rise in the number of road deaths in Israel. Until 2011, the number of men, women and children killed on the road was steadily dropping. But starting in 2012, the trend has reversed course. In 2012, 290 people were killed on the road. In 2013, 309 died. In 2014, 320.In 2015 the upward trend continued. There were 354 road deaths last year, a rise of 12 percent in comparison to 2014.What explains the steady rise in the number of deaths on our roads? As we have noted in the past, the single most important factor that leads to road deaths is speeding.Research by Prof. Elihu Richter, formerly head of the Injury Prevention Center at Hebrew University- Hadassah School of Public Health and Community Medicine and others at Hebrew University, shows that the higher speed limits have resulted in an additional 40 to 60 deaths per year.Everywhere, speed kills, and more speed kills more.During the 1990s there were reductions of some 45% to 50% in death tolls in the UK, the state of Victoria in Australia, and in France. These countries applied the axiom that because speed kills, they have to kill speed.A 10% increase in speeds of impact results in a 45% rise in fatalities among passengers and pedestrians, according to Richter. Raised speed limits induce even higher speeds, and produce speed addiction and speed spillover to other roads governed by lower speed limits.Richter is not the only scientist who has found a correlation between speeding and road deaths.France’s National Council for Road Safety (CNSR) found a similar correlation. Between 2014 and 2015, for the first time in 35 years, the number of road deaths increased in France. The CNSR showed the rise in deaths was accompanied by a moderate rise in average speeds during the same period. The European Transport Safety Council found the rise in speed was the result of lax enforcement and punishment. Of particular worry is the use of company cars in France.Speeding tickets are often sent to the company, not to the driver responsible for breaking the speed limit.In Israel we can identify an identical phenomenon.In November 2011, Transportation Minister Israel Katz decided to raise the maximum speed limit from 100 kph to 110 kph. Shortly after this decision was made, death tolls started climbing.Just last month Katz raised the maximum speed limit on Highway 6 from 110 kph to 120 kph. As it is, police really don’t begin enforcing speed violations until cars reach speeds of 130 kph or more. After the change, enforcement measures probably won’t be taken unless a vehicle travels as fast as 140 kph.Shmuel Abuav, CEO of Or Yarok, a road safety organization, argues that cuts in the National Road Safety Authority’s budget and a reduction in the numbers of traffic police are contributing to the rise in road deaths.This might be true. But a quick, easy and inexpensive way of reducing deadly accidents is to simply lower the speed limits.