Status of women in Israeli politics: The good, the bad and the road to full equality

The impressive increase of women's representation in the Knesset has not translated into similar strides in other political spheres and senior executive positions. 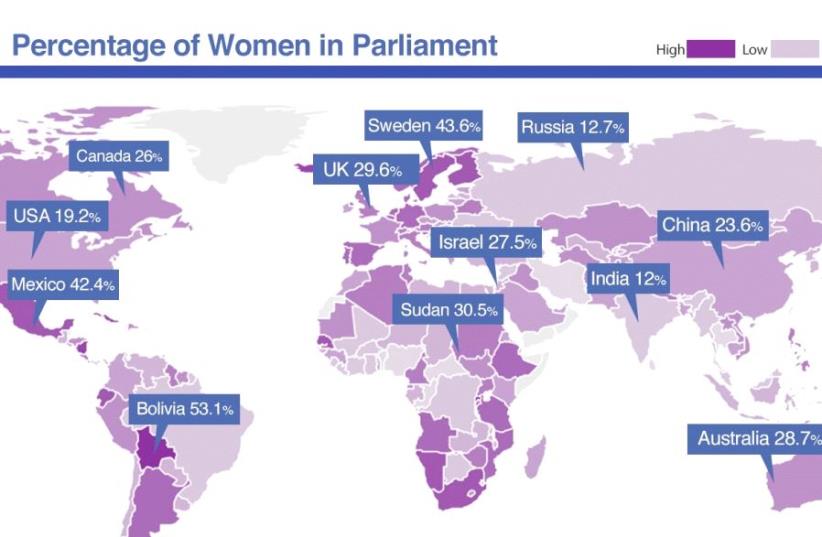 Percentage of women in politics
(photo credit: Courtesy)
Advertisement
The Israeli parliament has seen a dramatic, five-fold increase in the number of women in Knesset since 1988. Then, there were only seven female members of Knesset (MKs). Today, there are 33.Good news? Yes! But not good enough.  The impressive increase of women's representation in the Knesset has not translated into similar strides in other political spheres and senior executive positions. Israel needs to boost the number of women holding senior political and professional positions. Let’s look at the facts: Today's proportion of women in Israel's parliament, 27.5%, is higher than that of the United States Senate (21%) or House of Representatives (19%). Moreover, Israel's female parliamentary representation is greater than France's and Canada's (26%). In fact, Israel is only slightly behind the OECD average when it comes to female legislative representation.However, only four out of the 23 Ministers (17%) in the current Israeli cabinet are women. This figure is far behind the OECD average of about 30%. And, although Donald Trump's new cabinet includes only two women, several other democratic nations – France, Sweden and Canada – are run by governments comprised of gender-balanced cabinets. Historically, the share of female ministers serving in the Israeli government has always been low. And among those who have served as ministers, few held the most coveted positions – prime, defense, finance and foreign affairs ministers. The only female prime minister was Golda Meir (1969 to 1974). Tzipi Livni served as foreign minister (2006-2009). Today, Ayelet Shaked holds the important role of Minister of Justice. Three other female ministers – Sofa Landver, Minister of Immigrant Absorption; Miri Regev, Minister of Culture and Sport; and Gila Gamliel, Minister of Social Equality – hold lesser roles. Furthermore, women head only two of the current 12 permanent parliamentary committees. How do the municipalities stand up? The situation inside Israel’s local politics is even grimmer. There is only one female mayor – Miriam Feirberg of Netanya – out of Israel’s top 40 cities. In contrast, outside of Israel, there is a spike in the number of female mayors. As of 2016, nearly 20 percent of the mayors in US cities with populations over 30,000 are women. Also, there are women at the helm of many of the world’s most important cities: Paris, Madrid and Barcelona, Rome, Tokyo, Sydney, and Santiago de Chile.Why does it matter? The importance of women in politics extends beyond issues of proper representation and political visibility. It is also a matter of public policy and agenda setting. Several studies show that female politicians tend to be more involved than their male counterparts in promoting bills and policies concerning social affairs, health and gender equality. Therefore, the appointment of more women to key political positions is likely to result in the promotion of a variety of issues that otherwise might not be addressed.In order to increase the number of women in key political positions in Israel, the government should consider introducing affirmative action measures. The adoption of gender quotas, for example, has resulted in a substantial increase in female political representation in France, Portugal and, most recently, Ireland. The state should incentivize such affirmative action measures by offering greater financial incentives (bonuses, etc.) to parties that reach the desired threshold of women representation.In addition, the prime minister and party leaders must take action to enhance the presence of women in cabinet level and other senior executive positions, including as chairwomen of parliamentary committees. Such decisive steps will send a clear message that women are leaders. It will also serve as a model for other areas of society, resulting in the bolstering of more women in the public and private sectors in which there is still gender discrimination and striking wage gaps. Dr. Ofer Kenig is a researcher in the Israel Democracy Institute’s Political Reform Program.