Stay out of the IDF 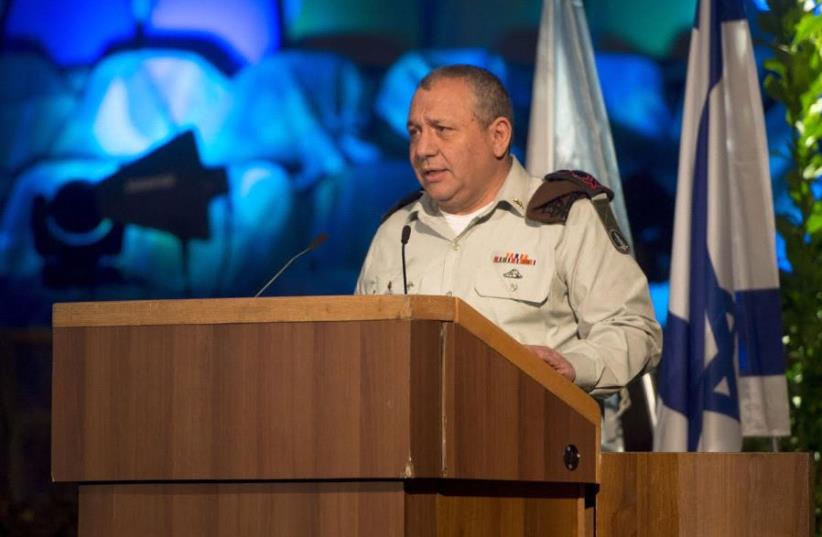 Gadi Eisenkot at a memorial for the 73 soldiers who died when two helicopters crashed en route to southern Lebanon in 1997.
(photo credit: IDF SPOKESMAN’S UNIT)
Advertisement
Maj.-Gen. Yair Golan is a courageous military officer. He has served in a number of important roles in the ID: head of the Judea and Samaria Division, commander of the Nahal Brigade, the Northern Command and most recently as deputy chief of staff.
But if you ask the right-wing organization Im Tirtzu, Golan is not worthy of becoming the next head of the IDF after Lt.-Gen. Gadi Eisenkot steps down in the beginning of 2019.The reason is a statement he made at a Holocaust Remembrance Day ceremony two years ago, comparing trends he had identified in Israel to Germany in the run up to World War II in the 1930s.“If there is something that frightens me in the memory of the Holocaust, it is identifying horrifying processes that occurred in Europe…70, 80 and 90 years ago, and finding evidence of their existence here in our midst, today, in 2016,” he said at the time.Golan’s statement was wrong and he was criticized from across the political establishment. But that does not mean that he is not worthy of serving as the next chief of staff. There are worrisome trends in Israeli society which we write about often in these pages. While we would not compare them to the period before the Holocaust, as a senior officer in the IDF, Golan is entitled to have an opinion and is entitled to have made a mistake in voicing them.According to Im Tirtzu and other right-wingers, Golan is not fit to serve due to a series of additional statements from which “a disturbing picture emerges of a commander who is prepared to take unnecessary risks against the lives of our soldiers.”According to officers who have served with Golan, this couldn’t be farther from the truth. Golan has served with distinction on the battlefield in Lebanon, the West Bank and the Gaza Strip. He has been injured in battle and was even reprimanded years ago for violating military regulations by allowing the use of the “neighbor procedure,” which had been banned by the High Court of Justice to help protect his soldiers.Defense Minister Avigdor Liberman, who has begun the procedure for selecting Eisenkot’s replacement, has interviewed four candidates in the running: Golan, current Deputy Chief of Staff Maj.-Gen. Aviv Kochavi, former head of Operations Directorate Maj.-Gen. Nitzan Alon and former head of the Southern Command, Maj.-Gen. Eyal Zamir.Kochavi, a charismatic paratroop officer, who has held key positions in the General Staff, commanding the Operations Division, Military Intelligence (2010-2014), and the Northern Command, is considered to be the front-runner.Liberman also dismissed the Im Tirtzu claims about Golan, saying that the former deputy chief of staff “is an excellent officer and a courageous commander who dedicated his life to the security of the State of Israel. The slander campaign against him in recent days is unworthy and will have no effect on the appointment of the [next] chief of staff.”We hope so. The interference of politics in the selection process is bad for the IDF and bad for the country. This was more than evident in the wake of the Elor Azaria-Hebron shooting incident, the consequences of which are still felt today in military units.
In addition, the defense establishment still remembers the effect the Harpaz Affair had on the appointment of the chief of staff in 2011, how it soured relations with the defense minister and how it undermined the public’s trust in its military.Golan made a mistake, but this should not immediately disqualify him from continued service. The criteria that need to be considered when choosing the next army chief include: experience, courage, the ability to manage a large organization, the ability to multi-task, to switch seamlessly from peace time to war and most importantly, someone who lives and operates according to a strict and clear moral code.Those trying to meddle in the selection process should stay out. There is a country that needs to be run and a military that needs to protect it.