A modest amount of snow in Jerusalem and in the mountainous regions to the south was forecast to start Monday night and continue into Tuesday and perhaps Wednesday. 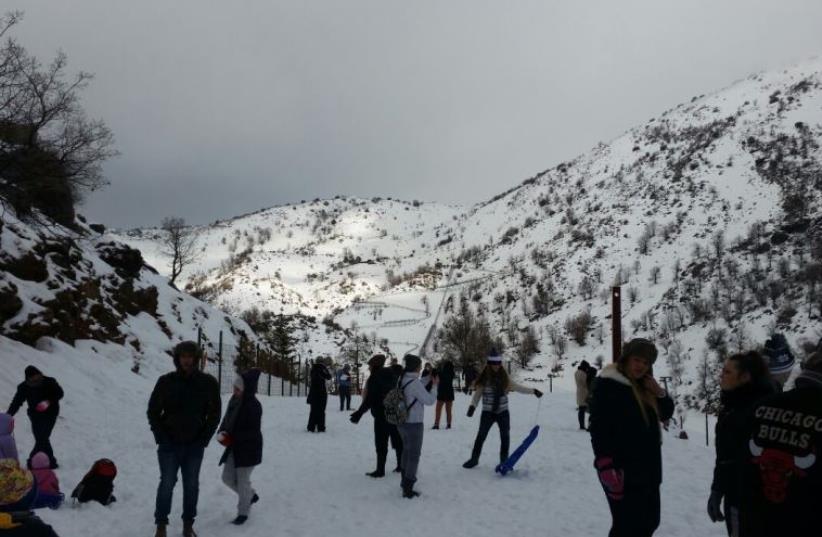 Snow on Mount Hermon, January 9, 2015
(photo credit: MT. HERMON MEDIA)
Advertisement
Are we really ready for a serious storm with significant snow? Jerusalem and other communities located high enough above sea level to have sub-zero temperatures – essentially any place above 600 meters – are hoping for the best as we prepare for the worst.Weather forecasters have made it clear that we will not be seeing a rerun of December 2013’s Alexa, a storm that incapacitated Jerusalem for at least a week, left thousands without electricity for days, made roads untraversable for long after the snow had stopped and hit the elderly and sick particularly hard.Still, the Israel Meteorological Service said a low-pressure system across the eastern Mediterranean is driving stormy weather into the country. The first areas hit with snow were Mount Hermon and Majdal Shams, followed by Safed and other towns in the northern Galilee. Rainfall is set to move from the north southward as temperatures drop.A modest amount of snow in Jerusalem and in the mountainous regions to the south was forecast to start Monday night and continue into Tuesday and perhaps Wednesday.Rain should stop falling quickly and temperatures are due to begin to return to normal on Thursday.However, weather is fickle. It has a tendency to surprise.Jerusalem Mayor Nir Barkat seems to have taken the necessary steps to make sure the capital is prepared.Jerusalem announced Sunday it had stockpiled thousands of tons of food, thousands of spades, heaters, generators, heat packs, emergency lighting, hundreds of blankets and sleeping bags. About 50 snow plows were at the ready in Jerusalem and dozens more were on standby.Municipal workers were on call to operate tractors and were preparing to distribute 400 tons of salt.The municipality warned residents that the closure of entrances to Jerusalem could be expected, and announced it was setting up a special Internet page with updates on roads, public transport and schools.Some 10 off-road vehicles have been equipped with shovels to help clear snow from the light rail tracks, and Citypass, which operates the light rail, has called on drivers not to abandon cars on the tracks.But there is only so much the municipality can do.In the wake of the December 2013 storm, a Knesset committee headed by MK Miri Regev convened to understand what went wrong. The main conclusion reached was that there is no overarching body on the national level supervising, providing information in real time and coordinating among municipalities, Israel Electric Corporation, Israel Police, firefighters, the IDF, various emergency organizations, public transportation and the school system.The result was that each of these bodies often operated in complete or partial isolation from the others or were at cross purposes. The Jerusalem Municipality was not aware, for instance, that Egged buses had discontinued all bus service and had not equipped any of its buses with chains. Israel Electric Corporation relied on local municipalities to help them gain access to felled electricity lines, but often the municipalities were not properly equipped or were busy elsewhere. Only gradually and partially were IDF vehicles capable of traveling in the snow were made available.The return of snow to Jerusalem provides a unique opportunity to revisit the idea of establishing a coordinating body on the national level that can help various organizations work effectively together.This is true whether the challenge is preparing for and functioning during a storm or whether it is dealing with the after effects of a earthquake, fire or a military attack.Ostensibly, the Home Front Defense Ministry should have been that body, but it was dismantled in May 2014 and its duties were transferred to the Defense Ministry.Defense Minister Moshe Ya’alon said maintaining the ministry was redundant and a waste of money.At the time of the dismantling, then-director-general of the Home Front Defense Ministry Dan Ronen said, “In recent months, I’ve seen how critical it is to prepare the Israeli home front for emergency situations like an American attack in Syria, earthquakes, snow and more.”He went on to say: “I have no doubt that the State of Israel requires an independent ministry with full authority and a full-time minister who will deal with preparations and management of the home front during an emergency.”As we once again encounter snow in Israel’s capital, Ronen’s warning should be taken seriously.