What drives Americans living in Israel to stay up all night for the game? 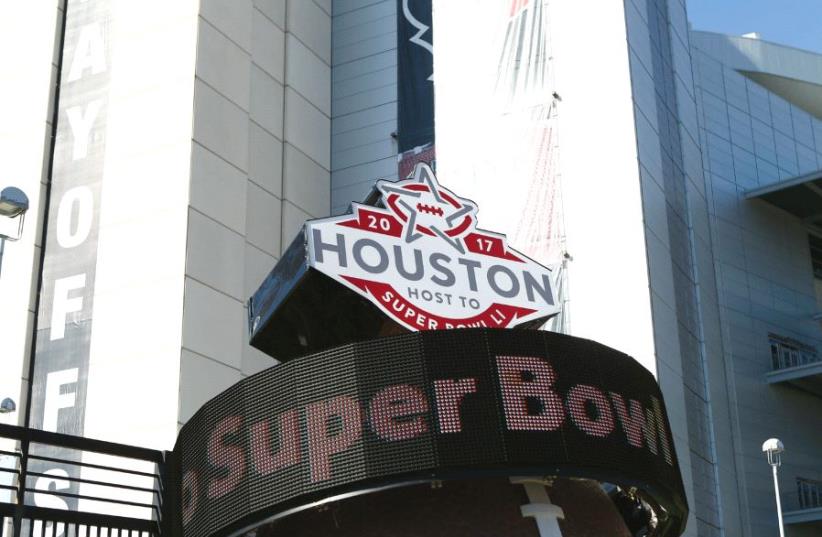 Super Bowl sign
(photo credit: REUTERS)
Advertisement
That time of the year has arrived again. On Sunday, February 5, more than 115 million Americans will be watching Super Bowl LI. The New England Patriots will be playing against the Atlantic Falcons in the National Football League’s championship game.In the United States, there will be many, many Super Bowl parties, friends getting together to view the game, eat some good food, drink beer and cheer for their favorite team. Football is an American pastime and is enjoyed by millions of fans each season.In Israel, the Super Bowl live broadcast begins at 1:30 Monday morning, which creates a challenge for football fans. You may ask who in their right mind would stay up all night long just to watch a football game, even if it is a championship event and one of the most widely viewed sporting events in the world. In fact, every year throughout Israel, many Americans do just that. Some watch the game in bars, such as Mike’s Place, and others view it in the comfort of their homes. Many have the tradition of attending Super Bowl parties with a group of friends.I am lucky to be part of such a group of American friends. We meet every year at Larry’s home to stay up all night watching the Super Bowl. Like our American counterparts in the Old Country, we order pizzas, drink beer and munch on plenty of popcorn and pretzels, while we sit and watch 22 players knocking heads on the football field for 60 minutes of play. There is the kidding around, telling some funny jokes, reminiscing about games past, and trying to predict who is going to win this year’s contest. It is a total funfilled experience! American football is an amazing sport, but passion for this sport is something deeply ingrained in American sport culture.For many Americans, football is like a religion, especially in states such as Texas and across the Midwest and the Southern states.This year’s teams are both great, which will increase the excitement of the night’s experience. Of course, there are the super-expensive and very entertaining commercials (the Israeli company Wix.com even has a spot) and the halftime spectacular performance that awaits us with Lady Gaga promising a great show.What really drives Americans living in Israel to stay up every year for the Super Bowl, in spite of the fact that some of us have to get up for work that same morning? Could it be the deeply rooted heritage in an American sport that was a central part of our past? Most of the guys grew up in the States and watched football.Some played the game with friends, and others played on high school teams. I remember watching football with my late dad. We shared this time together.He played football in high school, and so did I. I am not alone with this story.Some of the other guys have similar memories. Nostalgia certainly is one of the driving forces that fuels the desire to see the game each year.Clearly, the sport itself is a compelling factor. Men who love American football are no different from any lover of sports.They know all the game strategies, and rooting for a team is exciting.The Super Bowl event is cathartic in so many ways. For American olim, football is part of our identification with parts of the American experience that we cherish.Not all of us can relate to soccer. Israelis call soccer “football,” but you cannot fool the group at Larry’s – we know which game is really called football.Our adrenalin, excitement and love for the sport is combined with a special camaraderie and a shared bonding experience around a sporting event that was and still is an important part of who we are.I look forward to this year’s game. I, like my friends, will be rooting for one of the teams and cheering on our favorite players. I look forward to the plays and strategies, which are amazing, and if it is a close game, we may even carry on until 4:30 a.m.Pulling an all-nighter is not my favorite thing to do. Nevertheless, I would never want to miss a Super Bowl game at Larry’s, even if the guy sitting next to me snores as loudly as he did last year!The writer is a marital, child and adult cognitive-behavioral psychotherapist and a regular contributor to The Jerusalem Post Magazine on these matters.[email protected]