The Iraqi experience of “democracy” indicates Syria’s likely future: a united country fragmented into tribes and regions based on religious sectarian views, in the name of democracy. 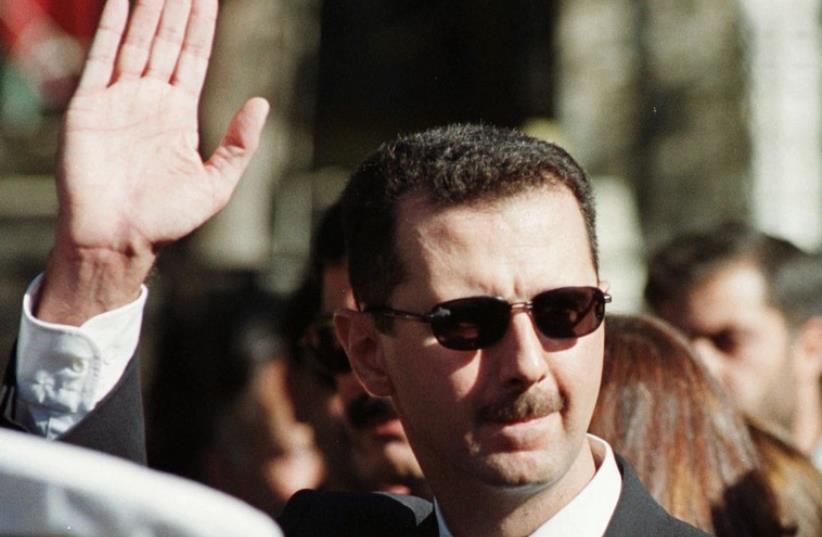 Syrian President Bashar Assad waves to supporters in Damascus
(photo credit: REUTERS)
Advertisement
When we look at Syria we don’t see a conflict between a regime and rebels, as it is often described. At first, years ago, it seemed like another revolution such as had taken place in Egypt or Tunisia, but the conflict in Syria is now much more complicated. There are several reasons for this. Foreign powers have turned the situation from a public uprising to an international playground. It’s now about more than replacing one regime with another – it’s become a question of existence.Will Syria as a country survive, or will it vanish.The Iraqi experience of “democracy” indicates Syria’s likely future: a united country fragmented into tribes and regions based on religious sectarian views, in the name of democracy.More problematic is the fact that the rebellions are supported with money and weapons from anti-democratic regimes such as Qatar and Saudi Arabia – a sure indication the brutal interference in Syria has no noble goal whatsoever. Supplying extremists with unlimited resources to fight the only remaining secular regime in the Middle East in the name of Allah and democracy is a joke, and a lousy one, too.There are three prevailing views among Palestinian Arabs in Israel on Syria (most Arab citizens of Israel view themselves as Palestinian). One sector supports the rebellion, others support Syrian President Bashar Assad and the third is not sure which side is worse. They claim to be “with the Syrian people,” whatever that means. The first group accuses the Assad supporters of being fascists, supporting war crimes against civilians.The Assad supporters in turn accuse them of racism and betraying Arab nationalism and wishing to replace it with Muslim nationalism, particularly Sunni religious nationalism.Both groups accuse the third group, which supports “the people,” of being naïve.When “Aleppo is burning” became a topic, it became a kind of virtual war zone on social media. Is it a cheap Qatari propaganda or a true description of what is happening in Aleppo? There are very hard accusations raised by all sides, and it seems it is the hot topic of the moment. It is as if your opinion on it, such as changing your profile photo to the red background and hashtag, defines you, the whole of you, even though your opinion won’t affect the situation in Syria whatsoever.Looking at the political spectrum, the various parties also have different views on Syria. Roughly, it goes like this: Balad is pro-Qatar, meaning it supports the uprising against Assad.Hadash is pro-Russian, meaning it supports Assad. The Islamic parties are considered to be pro-Islamic State (ISIS).Hadash’s motivation is quite clear: the price of turning Syria into a democracy is too high, and dividing Syria is out of the question. Supporting Assad means supporting Arab nationalism and socialism against a pro-American Islamic regime. It realizes that establishing a democracy in Syria currently is out of the question and nothing but a cheap excuse of the West and its Arab allies. The real agenda of the West and its allies is simply to divide and rule. Demolishing Syria would result in a hard blow to Shi’ite Iran and Hezbollah, which Saudi Arabia and Qatar see as a lofty goal. It would also constitute a strike at Russia and its economic and political influence in the region, which is a major goal of the Americans.The Islamic support for the rebellion is clear also: they wish to see a Muslim Shariah state. The fall of the Muslim Brotherhood in Egypt was a tough, painful blow. They are hoping Syria will succeed where Egypt failed. Their view is that the one and only goal is reviving the great Muslim empire of historical legend, with an eye to Turkey as a perfect candidate to lead such an empire.The more interesting case here is that of Balad. Its position is not clear to anyone. On the one hand it claims to be supporting the uprising, as a true supporter of the people, who wish for freedom and democracy. On the other hand its close relationship to Qatar, a dictatorship, turns the whole thing into a contradiction. If we study the history of this group, one fact in particular may hold the key. Balad’s former leader Azmi Bishara was very close to the Assad regime, and this included public visits to Syria, public support for Syria as the “protector of Arab nationalism” and viewing Syria as the biggest supporter of the Palestinian struggle. So the question is, what has changed? Balad itself will explain that it supported Assad while the Syrian people supported him, that they are dedicated to the people’s free will. Those who oppose this view will say that in fact Balad’s mentor, Bishara, is based in Qatar and working for Qatar and supplying his party with Qatari money; that in the end, the loyalty is to petrodollars.The cold war between Hadash and Balad on the Syrian issue might lead to the breakup of the Joint List, which unites several mostly Arab political parties. The mutual accusations have taken on a personal aspect on Facebook, with each side attacking key members of the other with hard accusations of betrayal.It has turned into an ugly and very personal debate. Will the Joint List get through this? Only time can tell.The establishment of the Arab party wasn’t easy from the beginning due to serious ideological differences.Now it seems those cracks are widening into chasms.The author is the owner of MASSMEDIA production house and board member of The Fund for Reconciliation, Tolerance and Peace.