Syrian journey of hope: Why we are fleeing to Europe

The world is responsible for the safety of the Syrian people. It should stop the war in Syria if they want the flow of refugees to stop. 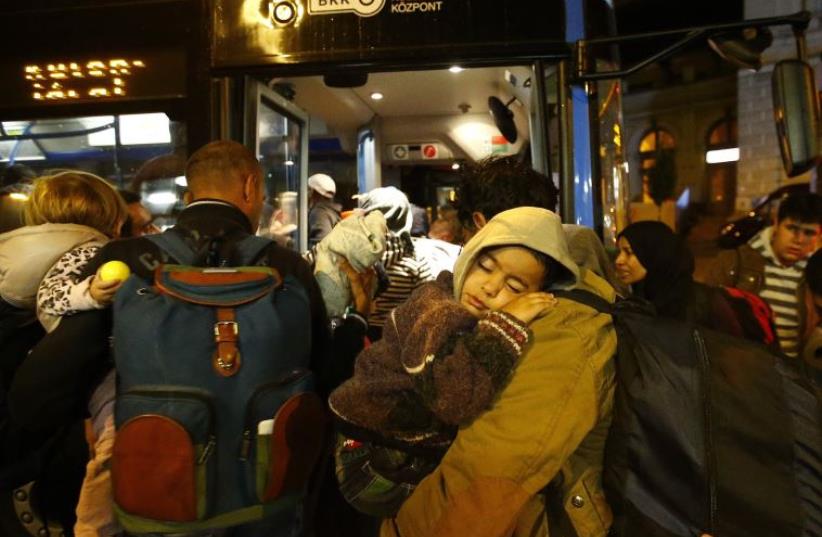 Migrants enter bus, which is supposed to leave to Austria and Germany, in Budapest, Hungary, September 4, 2015.
(photo credit: REUTERS)
Advertisement
The story of Syrians seeking refuge in Europe began two years ago when they began to lose faith that the end of the conflict in their country was within sight. The refugees suffered very hard economic conditions in the countries they had fled to, such as Turkey, Lebanon, Jordan and Egypt. They also faced bad treatment in some countries, such as Egypt, and it pushed them to think about alternative countries to seek refuge in. Europe came to mind. It is necessary to understand the reasons behind the Syrians choosing to be refugees.Most refugees are from the regions of Syria controlled by the opposition forces, because of heavy shelling inflicted by the Syrian regime on residential neighborhoods which caused hundreds of thousands of civilian casualties. Scenes in which the bodies of children were found under rubble became a daily event. In the beginning of the fighting between the regime and opposition, the regime used artillery and mortars and the numbers that fled the country was in the hundreds of thousands. The big flow of refugees didn’t start until the beginning of 2013 when the regime began using barrel bombs, killing dozens of civilians a day, instilling terror among the populace.The number of refugees came to number in the millions and increased day by day. A second wave of refugees fled from Islamic State and the extreme laws it enforced in the regions it controlled. The third segment of refugees came from regions controlled by the regime. These mainly left because of economic hardship and the shortage of public services like electricity, water and Internet; also due to sporadic shelling by opposition groups in retaliation for the mass shelling of the regime. Although it should be noted the mainstream opposition groups do not shell civilian areas.When the regime’s refugees began flowing from Turkey to Europe it was not on as large a scale as it is now, and the expense of reaching a European country was much higher than it is now. A limited number of traffickers and what Syrians call “smugglers” were involved and it was mainly through using flights and fake passports and benefiting from the corruption of African countries that the refugees transitioned through their airports. The route began in Turkey, to one African airport and then the person would be put illegally on a flight to their final destination in the EU. Special offices used to work as mediators between those who were seeking refuge and the smugglers so money was delivered when the refugees reached their destination.The increase in the number of people fleeing the war and the inability of the destination countries (such as Turkey, Lebanon or Jordan) to endure the burdens of such a large number of refugees led to feelings of despair toward the UN Refugee Agency which did very little to help people due to the complicated and very long process imposed on asylum seekers. The UN agency was met by huge numbers of refugees but managed to afford asylum to very few.These factors enhanced the demand for illegal immigration, and thus the smugglers started looking for cheaper, easier and quicker ways to reach Europe. In the beginning they gave a trial run to trying to reaching Bulgaria over land from Turkey and thence to Romania, Hungary and Western Europe. This was costly as well; the sea route was seen as cheaper.Now the cost of reaching Europe by sea has reduced from $10,000 to $3,000 at most, an amount that can be earned in a year of hard work in Turkey and by borrowing from relatives and friends on the promise of returning the amount once employed in the new host country. The first groups of refugees arriving by sea were returned by Greece to Turkey, but such a large number began to arrive daily that Greece no longer was able to do anything but give the refugees a paper of expulsion from the country so that they would continue their way westward into Europe.Old plastic boats began to be used in moving the refugees to Greece; these boats could not withstand the high waves and often capsized causing the deaths of thousands of Syrians, among them whole families. They died without returning the money borrowed for the journey. Turkish and Greek rescue teams saved may from drowning, but nonetheless some of the refugees who survived this experience accused the teams of neglect.Traveling by sea for the Syrians has become an hour of danger followed by a whole life of safe haven, and for the smugglers it has meant more customers and more money. The toddler Aylan Kurdi, whose body washed up on a Turkish beach, was not the first body that returned without its soul from among the desperate people who have made this trip of hope.It should also be noted that Syrian people are very angry with the Gulf states which did not take in their share of refugees, even though they are Arab and Muslim. The world is responsible for the safety of the Syrian people. It should stop the war in Syria if they want the flow of refugees to stop.

The author is a Syrian refugee from Aleppo.