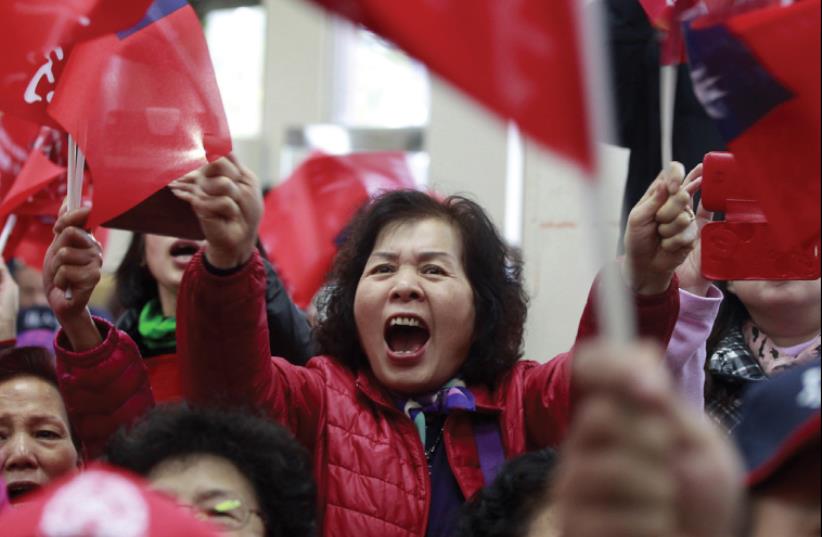 ENTHUSIASTIC SUPPORTERS of Taiwan’s ruling Nationalist Kuomintang Party (KMT) chairman Eric Chu wave flags during a campaign rally for the upcoming 2016 presidential election in Taoyuan, northern Taiwan.
(photo credit: REUTERS)
Advertisement
Presidential elections in Taiwan this Saturday will usher a new era in cross-strait ties, as the presidential candidate from the main Taiwan opposition party, likely to become Taiwan’s first female president, is poised to win, challenging China and forcing both sides to tread a fine line as they redefine existing relations across the Taiwan Strait.Nearly 12 million voters heading to the polls Saturday are going to choose between the independence- leaning Democratic Progressive Party (DPP) presidential candidate Tsai Ing-wen of the opposition, ruling Kuomintang (KMT, or Nationalist) Party candidate Eric Chu and James Soong of the smaller People First Party.The vast majority of opinion polls give a lead of at least 20 percentage points to the 59-year-old Tsai.What’s more, the DPP is expected for the first time to gain control of the legislature as well, creating a major headache for the People’s Republic of China that sees Taiwan as a breakaway province. Reducing tensions in the Taiwan Strait, one of the final vestiges of WWII and the scene of two near-nuclear crises between Communist China and the United States in the 1950s, is crucial for stability in East Asia, US-China relations, and the global economy in general.Still, relations between China and Taiwan are expected to remain steady, as China understands it needs to maintain open communication channels with the DPP. In fact, the various “goodwill” steps recently undertaken by China and deemed to have been aimed at helping the KMT at the polls may have actually had the DPP in mind.China knows it needs to deal with a DPP-led Taiwan, while Taiwan understands it needs to maintain steady and peaceful relations with its largest trading partner, regardless of ideology.The ‘One China’ question One of the hottest issues of the current campaign is the so-called “1992 consensus,” a formula created to skirt the issue of mutual recognition between China and the selfruled Taiwan, that were both part of the same Republic of China (ROC) before 1949. After the end of the Chinese Civil War and the establishment of the People’s Republic of China (PRC) on October 1, 1949, the Kuomintang government led by Generalissimo Chiang Kai-shek retreated to the island of Taiwan, about 160 km from mainland China. Since 1949, Taiwan has enjoyed de facto, though not de jure, independence.Both the Communists and the Nationalists deemed the separation temporary and agreed that Taiwan and the mainland were part of the same entity, but disagreed on which Chinese government was the rightful ruler. The 1992 consensus, ostensibly reached between mid-level officials from Taiwan and China in a meeting that year in Hong Kong, laid the ground rules of exchanges – that both agree there is but one China, but agree to different interpretations of the term.China insists that the 1992 consensus is the basis for future crossstrait relations. The DPP’s Tsai, whose base of support is much more skeptical of closer ties with China, has been evasive about endorsing the formula, reiterating instead her support for the current “cross-strait status quo” while acknowledging the importance of China for Taiwan’s economy.In an attempt to force Tsai to accept the 1992 consensus, China’s President Xi Jinping held a rare summit with Taiwan President Ma Ying-jeou in November, the first such meeting since 1949.Tsai to focus on the economy Tsai holds a PhD in law from the London School of Economics and is a former university professor and government trade negotiator. She held various positions, including minister of the Mainland Affairs Council, when the DPP was last in power from 2000 to 2008 (DPP held the presidency but not the legislature). The 2008 presidential elections brought the KMT back to power, and President Ma has made improvement in cross-strait ties the hallmark of his administration.The elections are actually a chance for Tsai, who ran unsuccessfully against Ma in 2012, to redefine the DPP away from its single focus on relations with China and focus instead on the economy. While KMT is facing a defeat in the polls as voters feel Ma has gone too far in his efforts to move closer to China, the reasons behind it aren’t just political – Taiwanese feel that the much touted promise of economic benefits from closer China ties was a bounced check. Tsai and the DPP have capitalized on widespread dissatisfaction with the sluggish economy and stagnant wages, aiming to steer the conversation away from cross-strait issues.The China-Taiwan-US triangle The issue of Taiwan remains a flashpoint in US-China relations.After the US switched diplomatic recognition from Taiwan to the People’s Republic of China, the US Congress passed the Taiwan Relations Act in 1979, which requires the US president to view any Chinese use of force against Taiwan as a threat to the peace and security of the region and to consult with Congress on how to react. The US continues to sell defensive arms to Taiwan.For China, the issue of Taiwan remains extremely emotional since it views the question of Taiwan as an internal affair in which no foreign power has the right to interfere.China knows it faces an uphill battle to win the hearts and minds of the Taiwanese, and has been engaging the senior DPP leaders for several years. All sides will be tested in the coming years in their skills managing cross-strait ties.The author is the founding director of The Chinese Media Center (CMC), at the School of Media Studies of The College of Management Academic Studies, Rishon LeZion.