Israel doesn’t win the public relations war when there is violence because it is the powerful party to the conflict. 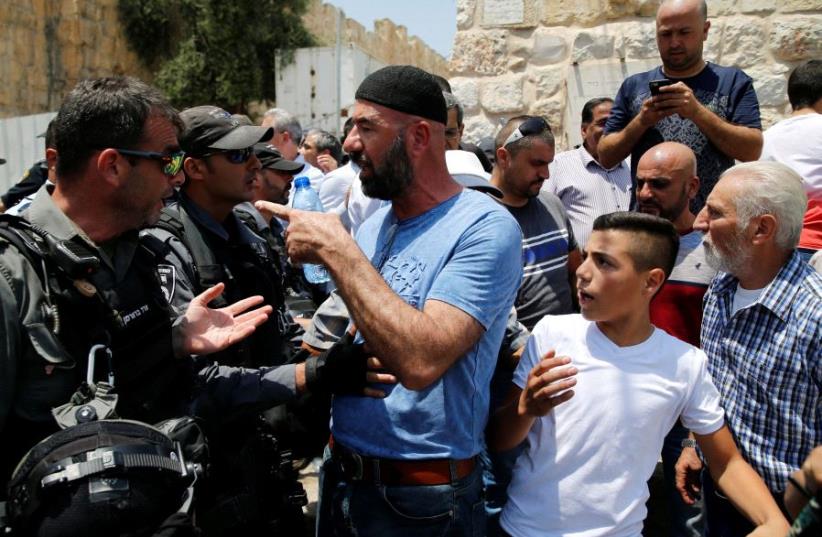 A Palestinian argues with an Israeli border police officer during scuffles that erupted after Palestinians held prayers just outside Jerusalem's Old City in protest over the installation of metal detectors placed at an entrance to the Temple Mount, July 17, 2017.
(photo credit: REUTERS)
Advertisement
There is a kind of self-fulfilling prophecy that there will be a Third Intifada.How does it start? The State of Israel and the Palestinians lurch into it after some incident that sparks a round of violence.The two sides are playing backgammon, when they should be playing chess.The latest round of violence began on July 14 after three terrorists from Umm al-Fahm murdered two Israeli policemen at the Gate of the Tribes of the Temple Mount compound. They could not have chosen a more holy and sensitive site. They knew that, as did the fourth man, the accomplice, who snuck the backpack of guns onto the complex. This final detail was not released for several days following the attack. It was the reason Israel Police asked to put metal detectors at the entrances to the Temple Mount. But those metal detectors are viewed as a violation of the status quo by the Wakf, Islamic authorities who manage the area, and by Muslim worshipers in general.For supporters of violence any attack on Israel is always viewed as “resistance.” After the killings on July 14 I saw many “moderate” Palestinians talking about how it is a “right to resist.” There was an op-ed in Al Jazeera titled “Palestinians have a legal right to armed struggle.” Other voices put it more simply: “This is what 50 years of occupation leads to.” From the “right to resist” viewpoint every killing of Israelis is acceptable. “The occupation justifies Palestinian terrorism” is put forward to excuse every attack, whether it is from Sinai targeting an Israeli family driving near Eilat, or whether it is three Israeli citizens coming to Jerusalem to murder.Since this is the point of departure of many who support and excuse terrorism, including many non-Palestinian anti-Israel voices, then it doesn’t really matter how Israel responds, whether with metal detectors or not. The metal detectors which ostensibly “sparked” this round of violence and caused protests to “boil over” are just the symbol.When the inevitable “boiling over” happens then everyone rushes to fan the flames. Hamas supports it. Israel calls up more police and army units, institutes more restrictions on Palestinian movement.Then there are more murders of Israelis, and more Palestinians killed in rioting. It’s simplistic to say it’s a “cycle” because it’s a well choreographed, relatively well-known sequence of events. “Cycle” implies that there is a somehow a direct relationship between these events, but there isn’t exactly.A young man who gets up in the morning in a Palestinian village to go stab an Israeli family is encouraged by hearing that “the Jews defile al-Aksa.” How do they “defile” it? With metal detectors? The three men from Umm al-Fahm weren’t responding to “occupation.” When protesters in the Old City shout “Jews, remember Khaybar, the army of Muhammad is coming,” this is a profoundly religious extremist chant; it’s not about “occupation,” it’s about the existence of Jews.Of course the lovers of the “right to resist” narrative want to ignore the reality of what underpins real violence, which is often rumors, incitement and religious extremism.There is no direct “cycle” connection between young men throwing stones and someone planning a terrorist attack.The problem Israel faces is that it is playing chess against this “third intifada.” It has to understand there are five or six rings of violence and protest. The first one involves Jerusalem. The second involves the Palestinian community in Israel, often called “Israeli Arabs” in the press but who see themselves as connected to the wider Muslim and Palestinian community. The third is the Palestinian community in the West Bank, the fourth is Gaza. Then there is the ring that involves the Arab and Islamic worlds, the protests that take place in Amman and further away against Israeli policies. Lastly there is the sixth ring that involves the international community and non-Palestinian anti-Israel activists abroad.If all this is a known quantity why does Israel end up playing backgammon, often called “shesh-besh” in Hebrew and Arabic, in a situation that requires chess-like strategy? There are those that would say the state is merely responding to events on a case by case basis; metal detectors were a logical response to two police officers being killed.But Israel has more to lose from a wrong decision than Palestinians do. The Israeli economy is stronger, Israel has worked hard to carve out relations in the Muslim world and its allies such as India continually warn Israel that the one issue that can harm relations is when Israel appears to be brutalizing Palestinians. Israel doesn’t win the public relations war when there is violence because it is the powerful party to the conflict.Israel continues to defeat the various terrorist waves and mass protests. This was the case with the massive protests after the murder of Muhammad Abu Khdeir in July 2014 and the wave of stabbings that began in September 2015. There is widespread knowledge that some Palestinian activists want a third intifada. They don’t know what shape it will take but they think that 50 years of Israeli rule in the West Bank and almost 25 years since Olso inevitably require a new “phase.” This threatens the aging leaders of the Palestinian Authority and threatens chaos that Israel doesn’t benefit from.If no one benefits, including the dead protesters, the murdered Israeli civilians, the police, the army, the PA or the Palestinians, then why is there violence? Because there is a kind of self-fulfilling prophecy that there will be a third intifada.Follow the author @Sfrantzman