Simcha Damri, a retired kindergarten teacher from Dimona, was in Istanbul with her husband, Avi, taking part in a culinary tour along with other Israelis. 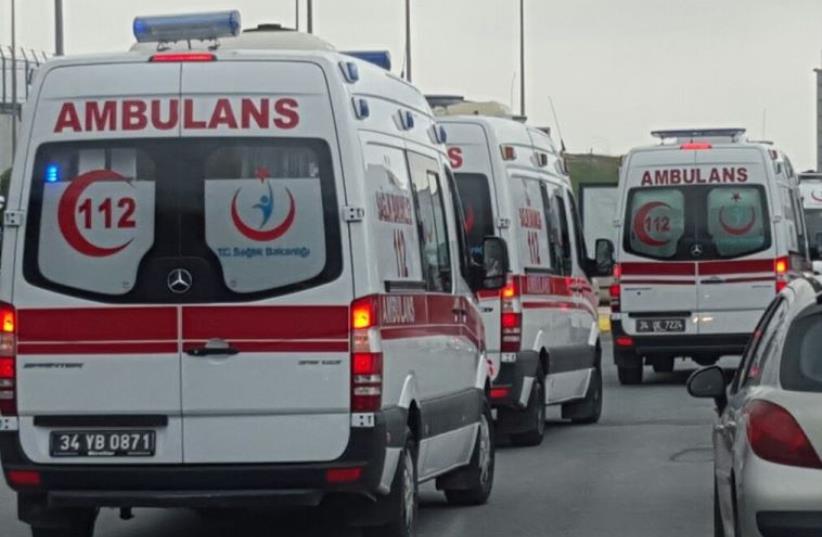 Red Crescent ambulances in Turkey
(photo credit: MAGEN DAVID ADOM)
Advertisement
Prime Minister Benjamin Netanyahu voiced doubt that the horrific suicide attack in Istanbul on Saturday was directed at Israelis, although it took a heavy toll: Three of the four dead were Israelis – Yonatan Suher, 40, Simcha Damri, 60, and Avraham Goldman, 69. Suher and Goldman also held American citizenship. The fourth fatality was an unnamed Iranian citizen. Half of the 22 wounded were Israelis, and Israel dispatched planes to fly those who could travel home.Damri, a retired kindergarten teacher from Dimona, was in Istanbul with her husband, Avi, taking part in a culinary tour along with other Israelis. She is also survived by three sons (two of whom flew to Istanbul to be with their father) and a daughter.Suher had been on vacation with his wife, Inbal, to celebrate his 40th birthday. He is survived by Inbal, who was wounded in the attack, and their two children.Goldman, who lived in Ramat Hasharon, worked as a tour guide, mostly taking important visitors around Jerusalem.He is survived by his wife, Nitza, three children, and eight grandchildren.Netanyahu told the weekly cabinet meeting in Jerusalem that Israel is at the forefront of the struggle against terrorism, which has both military and moral components.“The key in the moral fight against terrorism is to make clear that terrorism – the killing of innocent people – has no justification anywhere, not in Istanbul, the Ivory Coast [a reference to the March 13 attack in which Islamists killed 18 people and wounded 33] or in Jerusalem,” Netanyahu said. “Those who do not condemn terrorism support terrorism.”Following the Istanbul attack, the Counter-Terrorism Bureau in the Prime Minister’s Office issued a stringent advisory urging Israelis to avoid travel to Turkey.This is the sixth suicide attack in Turkey since July. Turkish officials blamed the previous five attacks, which killed more than 200 people, either on Islamic State or on an offshoot of the PKK.Turkish Interior Minister Efkan Ala revealed on Sunday that the suicide bomber behind the attack, Mehmet Ozturk, had been a member of Islamic State.In a letter to Netanyahu, Turkish Prime Minister Ahmet Davutoglu conveyed his condolences to Israel, and wrote that the attack “has shown us once again that the international community as a whole should act in a resolute manner against the ignoble objectives of terrorist organizations.”Iranian Foreign Minister Javad Zarif, who was in Istanbul to meet with his Turkish counterpart, Mevlut Cavusoglu, also condemned the “inhumane” attack and offered his condolences to Turkey.There were those who exploited the incident to lash out at Israel in the most despicable way. “I wish that the wounded Israeli tourists were dead,” tweeted Irem Aktas, the women’s media and publicity chairman for Turkish President Recep Tayip Erdogan’s AK Party. Erdogan summarily dismissed her for the hateful outburst.But the general feeling was one of unity against terrorism and a consensus – even among statesmen from countries with strained or antagonistic relations with Israel – that the suicide bombing, which struck Israel disproportionately hard, should be denounced by the civilized world.Jerusalem and Ankara are hardly on good terms, and diplomatic relations between Israel and Iran are nonexistent.But the suicide bombing offered a brief moment of clarity. There was a realization that terrorism makes no distinctions between Israelis and Iranians, or between Turks and tourists.Rather, terrorism represents a danger to all humanity. No one is safe. Any society can be targeted.Coordination between Israel and Turkey in the wake of the suicide bombing is essential, and perhaps this tragedy will trigger the resumption of diplomatic relations between the two countries in a region in deep turmoil.Saturday’s attack was a tragic reminder that terrorist organizations such as Islamic State will stop at nothing. But perhaps out of the death and darkness, a glimmer of hope for the future will emerge. For a moment, Turkey and Israel and even Iran are united by shared emotions of mourning and the resolve to fight back against the evil of terrorism.Will all this lead to a new era of peace and goodwill? Probably not. But for a short time, nations normally antagonistic to one another have been forced to recognize their common humanity.