The AIPAC conference in Washington isn’t over 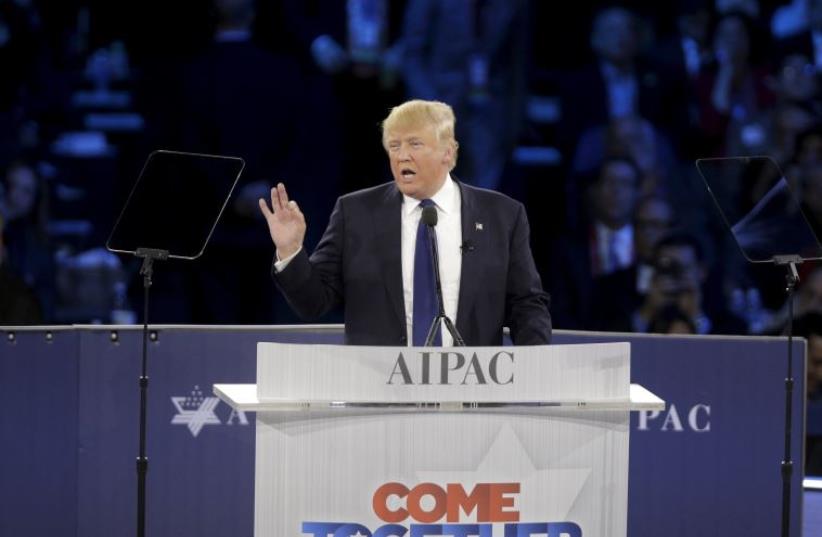 Republican US presidential candidate Donald Trump addresses the American Israel Public Affairs Committee (AIPAC) afternoon general session in Washington March 21, 2016.
(photo credit: JOSHUA ROBERTS / REUTERS)
Advertisement
The 2016 AIPAC Policy Conference officially concluded on March 22, but its impact will carry far beyond the 18,000 delegates from 50 states who gathered to hear the leading US presidential candidates. The messages from “America’s pro-Israel lobby” meeting will have national and even international ramifications.Recall that in the summer of 2015 AIPAC strongly opposed President Barack Obama’s campaign for the Iran nuclear deal. Taking on the president in a foreign policy debate is always a nearly impossible task; AIPAC learned that in the legendary AWACS to Saudi Arabia battle in 1981. Some pundits in 2015 even predicted AIPAC’s demise after the “train wreck.” AIPAC’s tour de force this week, with its unprecedented attendance and media coverage, proved that AIPAC emerged from the Iran debate strong and confident. Bellicose Iran’s misbehavior since the deal has certainly vindicated AIPAC’s opposition.Today, members of Congress on both sides of the aisle are considering new sanctions against the Iranian regime.Despite the White House’s success in pitting Democrats against Republicans in July 2015, the current legislation will be bipartisan. The 18,000 pro-Israel lobbyists are meeting with their senators and representatives today on Capitol Hill and will carry back the message to their communities.The AIPAC conference proves that despite the best efforts of Israel’s detractors in the administration, media and the J Street-Iranian-Arab Lobby syndicate, support for Israel is very robust in Washington – and across the US, according to national polls. There has been no erosion.The candidates’ extol-Israel speeches received international coverage, even live broadcasts on CNN, Fox, C-Span and various streaming video channels. The unanimous condemnations of Iran, Hezbollah and Palestinian terrorism were also heard in Tehran, Beirut, Ramallah and the capitals of Europe. They will soon have to internalize the words said by Bill Clinton on March 21, 2016, in Spokane, Washington: “We can put the awful legacy of the last eight years behind us.”The appearances of the presidential candidates and the attendance of congressional candidates at AIPAC also indicate their search for votes and campaign contributions.While the Jewish population in the United States is tiny, Jewish voter turnout has traditionally been very high, inflating their electoral weight. In several key states like Florida, Maryland and New York the Jewish vote can be critical. Moreover, many of the AIPAC attendees were Christian supporters of AIPAC, influential in their communities and churches.Repulsing the BDS efforts on campus Some 4,000 college students from all 50 states – Jews, gentiles, students of color, campus presidents – gathered at AIPAC to learn from the experts about the Middle East, political organizing, and repulsing the Boycott, Divestment and Sanctions (BDS) assaults. Students received a major booster shot for their efforts to block the BDS campaigns that too often escalate to anti-Semitism and physical intimidation. (On March 21, 2016, the Notre Dame student newspaper reported, “Notre Dame Students Launch Friends of Israel Club.”) James Zogby, the president of the Arab American Institute, decried AIPAC’s anti-BDS campaign. It has become, he declared on March 19, “a full-fledged national movement with AIPAC-supported initiatives moving forward not only in Congress but in two dozen state legislatures, as well.”Zogby’s right. The anti-BDS message was loudly proclaimed by the candidates, congressional leadership and state government officials.It should be noted that Zogby was listed by candidate Bernie Sanders as one of his foreign policy advisers. “We’ve talked to people like Jim Zogby, talked to the people on J Street to get a broad perspective of the Middle East,” he told NBC’s Meet the Press on February 7, 2016. The advice he received may have been a factor in Sanders skipping AIPAC’s candidate day.Some journalists attempted to create a tempest in the social media teapot over Prime Minister Benjamin Netanyahu’s decision not to attend the AIPAC event. Considering the high-contact political and partisan jousting match going on in Washington now, it definitely was the right decision. His message urging a strong, democratic, independent Jewish state was on virtually every speaker’s lips.Do all those speeches make a difference? One should never take to the bank the promises made during election season – in any democratic country. The late prime minister Ariel Sharon explained this binary political language: “What you see from here [in power], you don’t see from there [on the campaign trail].” Indeed, if one believed every American political speech and political platform, the American embassy would have been built 20 times in Jerusalem over the past two decades.So you don’t believe her/him? Actually, those speeches are very important for indicating the candidates’ attitudes and advisers. A speechwriting team writes according to the candidate’s expressed opinions, although there may have been cases where the candidate simply has no opinion or was not telling the truth.The speeches are important because they put down markers of what the candidate believes – at that time.Those markers serve as future reference points for advisers, reporters and supporters. The speeches of presidential candidates set the standards for all politicians of their party, including those running for Congress. If the speeches were meaningless, then why would one anti-Israel Salon reporter have angrily written today, “Clinton’s speech was full of distortion, belligerence and uncritical support of Israel?” Over my 40-some years’ association with AIPAC, I have frequently been asked, especially by Israelis, whether Jewish and AIPAC’s high-profile political activity incurs anti-Semitism. I can answer emphatically that the involvement of proud, unapologetic pro-Israel activists in American politics and campus life is the best defense against anti-Semitism.The author is the Jerusalem Center’s director of publications. Over the course of 25 years, he served in AIPAC’s Washington office and opened AIPAC’s Jerusalem office which he headed for 15 years. He has attended more than 30 AIPAC policy conferences. After leaving AIPAC to open a private consulting firm, he was asked to serve as the deputy chief of mission in the Israel Embassy in Washington.