The call of Tisha Be’Av – are we listening yet?

We live in a world where the reach of our communication has never seemed more global – and yet the depth of our discourse is more shallow and stilted than I can ever remember. 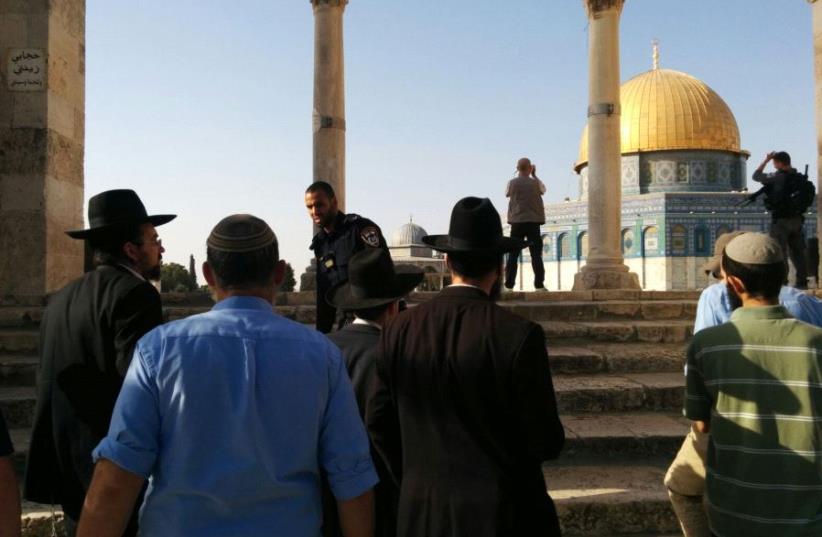 Jewish visitors in Temple Mount
(photo credit: ARNON SEGAL)
Advertisement
If we are awake to our heritage and history, we should be sitting bolt upright. The confluence of events involving our holiest site – The Temple Mount – and the tensions between different groupings of Jews in Israel and between Israeli and Diaspora Jewry, are hardly coincidental. Often, near Tisha Be’av, the Creator spurs us to review our priorities. This year’s events – particularly the past three weeks – have been striking.Our internal denominational divide has recently swirled around the status of the Western Wall – a proxy for the Temple that we ostensibly mourn for constantly in our daily prayers. Tisha Be’av is fundamentally about the loss of Jewish sovereignty over the holiest spot in Jewish geography, the Temple, Beit Hamikdash – and the moral and spiritual malaise associated with that loss. The fact that our current trifold crises – Jewish interdenominational strife, the Israel/ Diaspora divide and the issue of whether Jews or others have ultimate sovereignty over the Temple Mount – have all spiked simultaneously, during the traditional mourning period between the 17th of Tammuz and Tisha Be’av, is arresting.All manner of articles have appeared lamenting Jewish denominational discord and the Israel/Diaspora divide. Serious thinkers have proposed addressing these issues by constructing new identities based on Israeli-ness, or suggesting the Israeli government be “convinced” to be more receptive to American Jewish issues via boycotting government officials, stopping donations to Israeli hospitals and bringing down El Al airlines. Meetings have begun to take place at the highest levels, but the proceedings, as recorded and released to the public so far, seem to be missing essential elements, as participants try to reinvent the wheel.In truth, we have been here, before – many times. Too many times. The fundamental texts of Judaism burst with profound wisdom for dealing with these very crises. Our entire Tanach and much of the Talmud constitutes a discourse on these very issues, in different permutations. Yet we – the stiff-necked progeny of spiritual giants buried in Hebron, Nablus and on the road to Bethlehem – seem always to be overtaken by events that we should have seen coming. We have suffered this malaise throughout our exilic history – not only in ancient Egypt and, later, Babylonia, Greece and Rome.If we want to continue on as a family, a people, and not merely an ethnicity, we need to be exquisitely attuned to the messages of this moment in history and be re-attuned to the lessons our fundamental texts already contain. As Jews, we must re-understand our relationship to each other, the significance of the Land of Israel and the moral and spiritual mission vouchsafed to us as a prerequisite for settling the land promised us, durably and sustainably. We must do nothing less than reclaim the fullness of our identity and spiritual legacy.The future of meaningful Jewish existence and the achievement of our historic national mission hinge on our continued ability to durably and fully articulate our ideas across space, time and communal boundaries – to each other and the rest of the world.However, over the past decade or so, sub-communities have progressively withdrawn into themselves, circled their wagons and retreated into an internal dialogue that borders on solipsism. When individuals talk only to themselves we label them neurotic. I’m not sure what label one would apply to communities doing the same thing, as a precursor to effective address. However this spiritual malaise must be acknowledged and faced squarely. Paradoxically, we live in a world where the reach of our communication has never seemed more global – and yet the depth of our discourse is more shallow and stilted than I can ever remember. We can do better. We must do better.The writer practiced law in Boston, Massachusetts. He has served in leadership roles for a large variety of Jewish communal organizations. He is an alumnus of the Wexner Heritage Foundation and lives in Efrat.