Since Sisi came to power he has repeatedly promised to pull Egypt out of the stifling economic situation that has plagued the country for years. 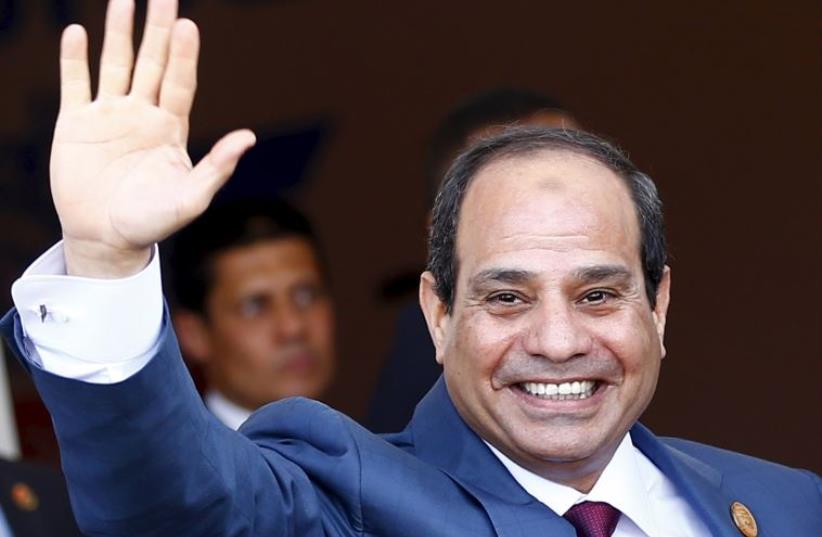 Egyptian President Abdel Fattah al-Sisi waves as he arrives to the opening ceremony of the New Suez Canal
(photo credit: REUTERS)
Advertisement
In the past year, Egyptian President Abdel Fattah al-Sisi has announced several mega-projects to push up the national economy, including the New Capital, an international economic summit in March, and above all the opening of the new Suez Canal. Sisi coupled his major undertakings with extensive international visits to countries such as Russia and Germany to discuss potential bilateral economic opportunities. Additionally, Saudi Arabia continues to be a vital financial backer of the Egyptian economy, alongside the UAE and Kuwait. Together these Gulf states have provided financial support into their strategic ally’s economy over the past two years.Sisi’s first large-scale project, “The new Suez Canal,” attempts to prove the Egyptians and the world that Egypt’s stability is ultimately dependent on national projects, despite increasing terrorism and a deteriorating economy.Ultimately, the New Suez Canal suggests that there are ways for the Egyptian economy to recover if there is popular willpower to do so and political leadership that enjoys the confidence of its citizens.It should be noted that the Suez Canal has a special significance for Egyptians, since many Egyptians sacrificed their lives while digging the original 193-kilometer canal linking the Red Sea and the Mediterranean in 1859. The excavation took over a decade using forced labor of tens of thousands of Egypt’s workers. During construction, many Egyptian deaths resulted from hunger, thirst, disease and torture. One hundred years later, Nasser’s nationalization of the canal became a major point of Egyptian pride and opened the way for other large-scale national projects, such as the Aswan Dam, and new iron and steel factories.In 1956, president Nasser stunned the world with his decision to nationalize the Suez Canal and seize ownership from its former colonially backed company after the international community refused to build the Aswan Dam.In a similar vein, the Sisi government also produced international surprise by managing to fund the largest share of the canal project through investment certificates bought by many Egyptian citizens from all classes of society, raising eight billion dollars in just eight days.The Suez Canal Authority predicts that the new expansion will boost the number of ships transiting through the canal daily from 49 to 97 by 2023, and the government is predicting an increase in revenue from the canal from the currently $5.3 billion to $13.2b. by 2023.With the apparent success of the New Suez Canal, there are several steps that the Sisi government can take to ensure that this success is a permanent one.These national projects could be key to helping the Egyptian economy recover.In this context, economic progress is the only sure way for Sisi’s government to increase its popularity and remain in power.In order to protect these major projects from the threat of terrorism, Sisi’s government needs to adopt an alternative approach to effectively combat terrorism. Such an approach would involve measures to back moderate currents of Islam within religious institutions subject to the state. The aim of this would be to spread an enlightened version of Islam among young people to combat the draw that extremist forms of Islam led by Islamic State have among young people in tribal and rural areas of Egypt.A national strategy is necessary to continue facilitating citizen participation in national projects and government policies that require significant funding. The best means to attract citizens to contribute is the experience of successful citizen-funded projects, and the New Suez Canal provides a key first step. But such a measure is a double- edged sword. Citizens could lose trust if government is not transparent about the benefits and the financial rewards for each participating citizen – even if the citizen’s share in the project is very small.Although news headlines and official reports seem promising, the average citizen can’t quite see these improvements or changes materializing on the street, especially since prices are still skyrocketing and unemployment rates have not decreased. Consequently, Egyptians have mixed opinions on Sisi’s progress on the economic sector.DESPITE THE lack of improvement in the lives of average Egyptian citizens under Sisi’s tenure, some of his supporters believe that expecting the president to provide quick progress for Egypt’s economic situation is unrealistic, especially in a country where corruption and turmoil have been the norm for years. Some Egyptians also believe that the country’s economic situation is improving, especially after the economic conference.On the other hand, there is a significant mass of Egyptians who remain unhappy with the state of the economy.Their anger doesn’t necessarily originate from a general opposition to Sisi – some are avid supporters – but instead develops from the economic hardships they face in their everyday lives. Yet this group is often subjected to major criticism when they express their dissatisfaction. Portrayed as selfish and unrealistic, these Egyptians face repeated blame for failing to prioritize the country’s security situation over their personal needs.Naturally, Egypt’s current security situation plays an important role in the economy and Egyptians’ perception of economic progress. With terrorist attacks hitting North Sinai and even reaching the capital, many Egyptians are willing to overlook the country’s economic situation. Instead, they are ready to accept some economic setbacks as part of what they believe to be their social responsibility toward the government to help fight a greater evil: terrorism.For now at least, the political implications of this issue seem to be limited.People are either overwhelmed by news headlines of mega-projects and foreign aid or focus their concerns on the increasing risk of stronger terrorist threats. Still others either hope for stability after years of turmoil or are too afraid to voice their concerns, knowing that their opinion will only open them up to censure. The Egyptian government understands that these variables prevent major criticism of the Egyptian government and is currently relying on these issues as defensive shields to prevent backlash from any shortcoming or failure in the economic sector.The author is a Middle East and Arab media researcher at Bar-Ilan University.