An antiquated assumption that women are incapable or unwilling to grasp grand concepts hasn’t quite disappeared, despite the existence of women justices, neurosurgeons, and Google CEO's. 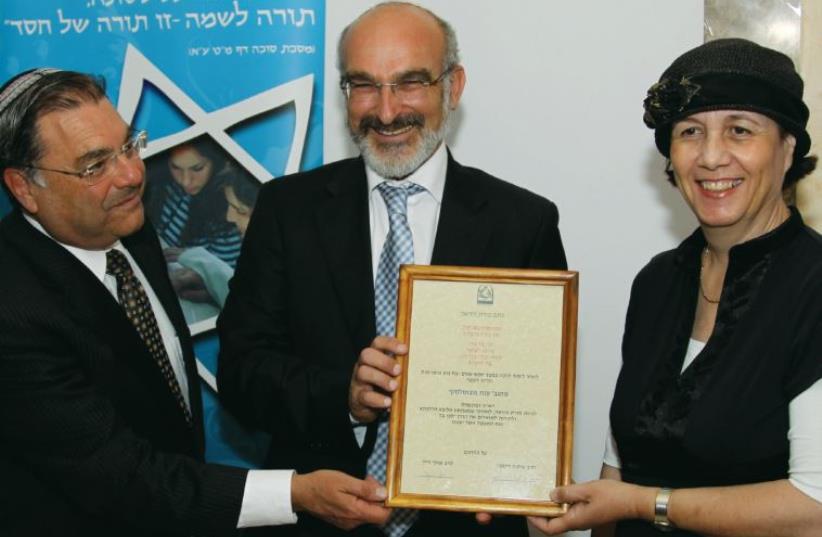 Anat Novoselsky receives her certification as a spiritual leader and arbiter of Jewish law from WIHL head Rabbi Shuki Reich (center) and OTS chancellor Rabbi Shlomo Riskin
(photo credit: Courtesy)
Advertisement
An Orthodox woman has studied Talmud and Jewish law for five years and has passed the stringent tests for rabbis written by the tough Israeli rabbinical authorities. She has taken courses in psychology, rhetoric and spiritual counseling. She is determined to use her knowledge and talents to serve the Jewish people. She is well informed with ideas about contemporary religious challenges.What to call such a highly qualified person is a quandary for the Orthodox world. A few women in Jewish history reached the hallowed heights of scholarship – Bruria, Yalta, Menucha Rochel, Nechama Leibowitz. These distinguished women received their education at home in families where there were no limits on education.But now, instead of a rare woman or two, we have a program that has the potential to prepare tens and hundreds of pious and gifted women for new roles within the Jewish world.Four such outstanding women recently graduated from Midreshet Lindenbaum’s Susi Bradfield Women’s Institute for Halakhic Leadership (WIHL), part of Ohr Torah Stone. The four graduates have completed the comprehensive curriculum for aspiring rabbis, in addition to professional courses in spiritual counseling. They are qualified to make a ruling with halachic authority about whether the proverbial chicken is kosher and, more important, if an abusive husband can be denied an honor in synagogue, or if a woman has to tell her fiancé that she has herpes.Halachic decisions aren’t merely technical applications of dry law. They require serious deliberation that reflect the character and values of the decisor. What a benefit to have learned women enter the halachic conversation, where such decisions are made for each generation.The barricades to Jewish study for women began to fall almost a century ago when in 1923, Sarah Schenirer opened her first Bais Yaakov school, radical at the time, in Krakow. She won the approval of the Hafetz Hayim. The curriculum has expanded over the last century.Nonetheless, an antiquated and patronizing assumption that we women are incapable or unwilling to grasp the grand concepts and nuances of the laws, precedents and traditions hasn’t quite disappeared, despite the existence of women justices, neurosurgeons and Google CEOs.Until recently. a woman couldn’t reach the highest levels of Jewish learning, which requires investment of resources, organized classes and competent instructors willing to share the rarified decoding methods with women.As hard as it is to believe for the lauded People of the Book, women were barred from the equivalent of graduate and postgraduate programs within the Jewish world.Over the last several decades, advanced Jewish programs for women – among them Midreshet Lindenbaum – have raised the bar high and attracted brilliant and religious women from around the world who crave Jewish education.At another Jerusalem academy of advanced women’s study, Nishmat, women halachic advisers run a hotline to answer questions about ritual purity – the kind of intimate stuff women are reluctant to discuss with a rabbi. Sometimes these questions cross the line to other areas of Jewish observance.The WIHL program also includes these other areas, among them Sabbath observance, laws of mourning, marriage and divorce. The women who graduated this month were certified to render halachic decisions. They have been trained as spiritual leaders as well as licensed to be arbiters of Jewish law, like rabbis.Nonetheless, the title “rabbi” for a woman has been the red flag for Orthodox Jewry, even among many women and men with liberal leanings. For others, the R-word is terrifying.In a shocking, controversial article, Rabbi Mordechai Willig – a prominent rabbinical dean at Yeshiva University – has called for a reevaluation of the place of higher learning for women in day schools and beyond. Instead of heralding the elevation of knowledge among the Jewish people, he blames women knowing too much for problems in contemporary Judaism. Teach a girl to read Rashi script and the next thing you know she wants to be a rabbi. Talk about backlash.So graduates of WIHL are not called rabbis but are officially “halachic decisors,” those who, from a new position of learning and status, take part in the ongoing evolution of Halacha. Evolution, not revolution.Even Ohr Torah Stone founder and chancellor Rabbi Shlomo Riskin and co-chancellor at Ohr Torah Stone Rabbi David Stav, who stand behind this program, don’t accept a woman’s leadership in ritual and synagogue roles.Graduates of WIHL won’t be included in the 10-count needed for a quorum to say the mourner’s prayer, let alone be able to lead daily prayers.Perhaps that will quiet the fears of rabbis who are determined not to hear the voices of women, turning back the clock to a time when women were purposely distanced from the seminal texts of our people.So call them what you will – what a joy to welcome this new cadre of decisors into our world. The pioneering decisors are already taking leadership roles in Jewish education and religious think tanks.Riskin hired one of the decisors- in-training, Dr. Jennie Rosenfeld, as a communal spiritual leader in Efrat, where he is chief rabbi. She answers questions about Jewish law and gives advice on religious life. At the Ohr Torah High School for Girls in Gush Etzion, two WIHL decisors are functioning in roles parallel to that of school rabbis.They not only are counselors and confidants to the teenage girls but also give advice based on deep halachic understanding.Mazal tov, graduates. Mazal tov, Jewish world. The author is a Jerusalem writer who focuses on the wondrous stories of modern Israel. She serves as the Israel director of public relations for Hadassah, the Women’s Zionist Organization of America. The views in her columns are her own.