‘They are determined to show other women that going to the mikve can be a positive spiritual experience.’ 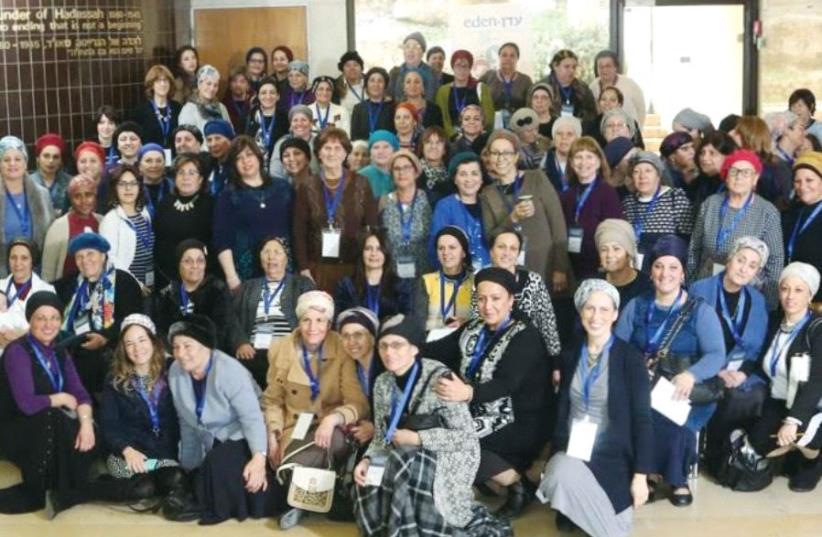 Mikve attendants
(photo credit: COURTESY OF EDEN CENTER)
Advertisement
Winter rain is pounding on the tiled roof of the ritual bath. Inside, the attendant – call her Atara – longs for home. Her baby has a cough. Her husband is stalling the cousins who have come for dinner.Atara has opened the ritual bath for a newlywed who she knows is trying to get pregnant. Atara knows many private matters. Keeping secrets comes with the territory when you are a mikve attendant.A knock on the door. A car outside.“I need to immerse,” says the stranger in the wet raincoat.Atara groans inwardly, careful not to show her disappointment or glance at the clock.“I’m Hadar,” the woman says. “I promised my grandmother that I would always go to the mikve. My husband doesn’t like it. I’m sorry I’m late, but don’t worry, I’ll be ready in a jiffy.”Atara ushers Hadar into a preparation room.Five minutes later Hadar calls for Atara.She’s ready.As a trained attendant, Atara checks each woman who requests checking to make sure a stray hair or towel thread won’t come between her and the waters.Atara will also make sure the immersion is fully underwater.Atara knows that in previous decades, mikve attendants – balaniyot in Hebrew – might have scrutinized rough elbows and scraped under toenails.They might have questioned women about their eligibility for immersion, including marital status. Her training is different. She responds to each woman’s request for, or rejection of, supervision.She’ll never touch anyone without permission, not even to brush off a fallen eyelash.Hadar holds out her hands for Atara to examine.That’s when Atara sees the artfully polished fingernails.“Oh, I forgot,” Hadar says. “I always wear nail polish. Do you have any acetone? I’ll take it off now.”But right now is Friday night. Removing fingernail polish is prohibited on Shabbat.Atara can’t phone the rabbi. The only rabbi in the village is away for Shabbat.Tears pool in Hadar’s eyes. She needs to immerse tonight.Atara is going to have to make a decision based on her own knowledge of the Torah laws she’s studied to qualify for this job, informed by her own sense of right and wrong. If she sends Hadar away, she may stop coming to the mikve.The names above have been changed, but the quandary is real.“Polish on all 10 fingers,” Atara tells the dozen women at her table. They understand. They’re attendants, too.We are at the first Eden Center Conference of Mikve Attendants. More than 250 women have gathered in Jerusalem from around the country.Positive energy is abundant. Most of the women are dressed up: longsleeved suits or dresses, coiffed wigs, bright kerchiefs and the intriguing beehive-style scarf wraps. They’re excited to share their challenges with others who have undergone these challenges and to hear from experts.Extraordinary women.You have to be devoted to be a mikve attendant. The pay is poor, the hours inconvenient, the conditions far from luxurious.“Most of the women who become mikve attendants today have deep convictions about the importance of this religious obligation,” says Dr. Naomi Marmon Grumet, founder of Eden – a support and training organization for mikve attendants. “They want to give back, or believe in mikve and are determined to show other women that going to the mikve can be a positive spiritual experience.”New legislation has intervened on behalf of women who want to use the mikve without being interrogated or supervised, either on preparedness or marital status.“There are still some attendants who feel they have to protect the holiness of the ritual bath or to protect women from themselves,” says Grumet. “But change is here.”Eden holds hundreds of sensitivity training sessions for attendants and offers a hotline 24/6 for support.In theory, mikve attendants are not qualified to determine Jewish law. In practice, they often stand alone with a woman in a towel before them and must make decisions.The women at Atara’s discussion table include those with decades of experience and several rookies. Some describe the strain of women with obsessive- compulsive disorder who take five hours preparing to immerse. One attendant has numerous New Age clients seeking a mystical experience.Another shares her method of helping newbies to overcome fear of water.They share a pride of profession.“Attendants need to deal with ethical issues,” says Grumet. “When a husband phones and asks if his wife is there, does he just want to know when he should shut the oven, or is he checking to make sure she’s really there? What should you do when you see a handprint or a cigarette burn? The attendants can consult the Eden hotline, and are encouraged to delicately direct women to helplines on possible abuse or health problems.”Three esteemed medical professors address the conference attendees on birth control, pregnancy and menopause, each saluting the attendants as community leaders and allies in improving women’s health. The experts explain that when a woman who is pregnant or past menopause shows up at the mikve, she needs a reminder to see her doctor. There are other sessions on management and sensitivity.And Hadar? “I didn’t sleep so well, hoping I had made the right decision,” says Atara. Based on parameters for immersion that deal with beautification, she ruled that the nail polish on all fingers did not constitute a barrier.Hadar immersed, 10 polished fingers and all. ■ The author is a Jerusalem writer who focuses on the stories of modern Israel. She serves as the Israel director of public relations for Hadassah, the Women’s Zionist Organization of America. The views in her columns are her own.