An ocean separates Jerusalem and New York, but today we feel twinned – like the towers. 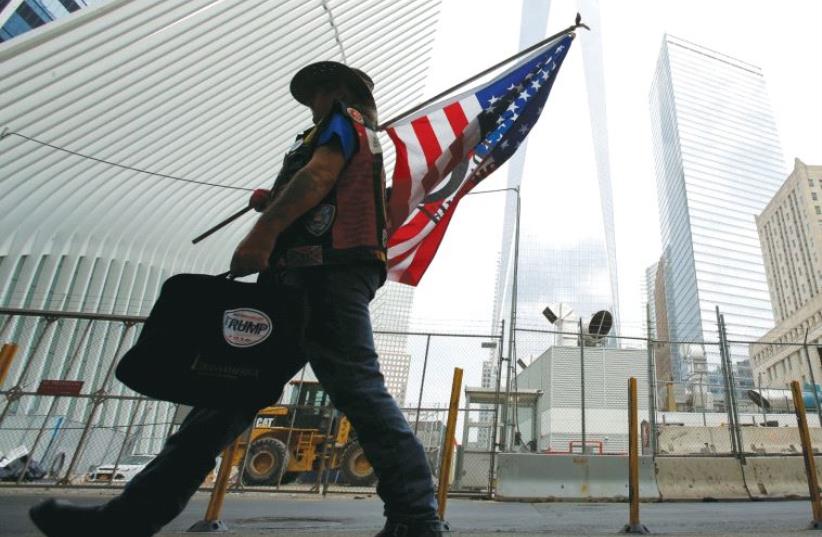 A man arrives at the World Trade Center complex on the morning of the 15th anniversary of the 9/11 attacks in Manhattan this week
(photo credit: REUTERS)
Advertisement
Recent forest fires in the Jerusalem Hills have muted the scent of wild thyme and reduced the greenery around the monument, but the Living Monument Plaza, Israel’s singular monument for the victims of September 11, stands untouched.The memorial ceremony is the US Embassy’s official commemoration, partnering with Keren Kayemeth LeIsrael-Jewish National Fund. Among the participants: a delegation of American police officers, in Israel to study with colleagues; buses of new American immigrants through Nefesh B’Nefesh; the entire Young Judaea Year Course, a gap-year program of mostly American teens; bereaved families.An ocean separates Jerusalem and New York, but today we feel twinned – like the towers. Indeed, most of the eloquent speakers note our mirrored values, our mutual struggle and our shared resilience.Fifteen years have passed, but the pain is “raw and painful as the day itself,” says Ronald Lauder, chairman of the JNF board, himself a New Yorker. The nearly 3,000 names are etched around the cenotaph, even victims from countries that refuse to recognize Israel.We say kaddish, led by the father of one of the five Israelis killed in the attack, which combined mass murder and demolishing symbols of freedom.For most of the speakers, the ceremony was also intensely personal, in addition to their representative roles.Mayor Nir Barkat lost his friend Daniel Lewin, the hi-tech genius and former IDF commando who died while single-handedly trying to stop armed terrorists on American Airlines Flight 11 – the first plane to hit the towers. To my right, Hadassah national president Ellen Hershkin mourns her best friend’s son who worked in the towers. Behind me, Jersey City police detective Jimmy Lisi remembers his brother-in-law, a police officer in Manhattan. US Ambassador Dan Shapiro was working on Capitol Hill and will always feel beholden to the valiant passengers on United Airlines Flight 93 who prevented their terrorists from reaching that target. I am grateful, thinking of the narrow escape of my cousin Mark Sokolow.Among the attendees is sculptor Eliezer Weishoff, the spry 78-year-old Sabra who crafted the sculpture and fought for its erection.On September 11, 2001, Weishoff, who collaborates with his wife, Ella, was working at the office of Israel Coins and Medals Corp., where he was an artistic adviser. He is the ultimate Israeli artist, born in Jerusalem’s Mahaneh Yehuda neighborhood, a graduate of Bezalel Academy of Arts and Design, creator of many of the sculptures, stamps and posters that have become icons in the Israeli landscape. His artistry is interwoven with the turbulent events of Israel’s strife and struggles. Still, he was overwhelmed with sorrow for the United States as the twin towers fell.That very evening, his colleague asked him to design a 9/11 medal.“Too soon,” was his first response.How could he work? But he did. His design for the medal became the basis of a sculpture, a project that would take nine years before it reached fruition: nine meters of granite, bronze and aluminum that form an American flag as if waving in the hillside wind, transformed into a flame.“Even in the midst of the tragedy, you could feel the greatness of the American,” said Weishoff. “That’s how we needed to honor the dead – not with fragments of bodies – with a flag that remains a flame.”He wrote to the City of New York and asked for a piece of the debris; a steel bar from the collapsed tower that is visible in the base.The first terrorist plane hit the North Tower, ripping a hole from the 94th to 98th floors. My cousin Mark was working in the South Tower. He walked down the 38 floors from his law office to the commercial lobby level. He felt the building shudder as the second Boeing jet destroyed the 84th to 78th floors. It would collapse first, 56 minutes later.Mark was already on his way home.The following January, Mark and his wife, Rena, made a family trip to Israel, partly vacation and partly thanksgiving.While shopping for sandals on Jaffa Road in Jerusalem, a volunteer for the Red Crescent named Wafa Idris entered the shoe shop, then went outside and blew herself up, killing one person and injuring 150. The Sokolows were among the wounded survivors.In 2004, they became the lead plaintiffs in a civil trial by 10 American families against the PLO and the Palestinian Authority. The Anti-Terrorism Act lets American victims of international terrorism sue in US courts.The defendants were found liable; damages were fixed at $655.5 million.The plaintiffs showed that many of those involved in the attacks were employees of the PA, which paid salaries to imprisoned terrorists and awards to families of suicide bombers.But on August 31 the Second US Circuit Court of Appeals in Manhattan overturned the verdict of the Manhattan federal district court and dismissed the lawsuit on the grounds that US federal courts lacked overseas jurisdiction on civil case – a setback for all who believe terrorists should be made to pay.At the memorial ceremony, no borders of jurisdiction exist. We mourn together. I know that if we are to defeat terrorism, we have to see ourselves not as separate entities but as united by the strongest filial bonds. The institutions of a free society must go beyond borders if they are to protect us from those who would see us enslaved. The author is a Jerusalem writer who focuses on the wondrous stories of modern Israel. She serves as the Israel director of public relations for Hadassah, the Women’s Zionist Organization of America. The views in her columns are her own.