The hypocrisy of BDS on a university campus

On an average day an individual cannot scroll through their twitter feed without seeing some controversy brewing on campus. 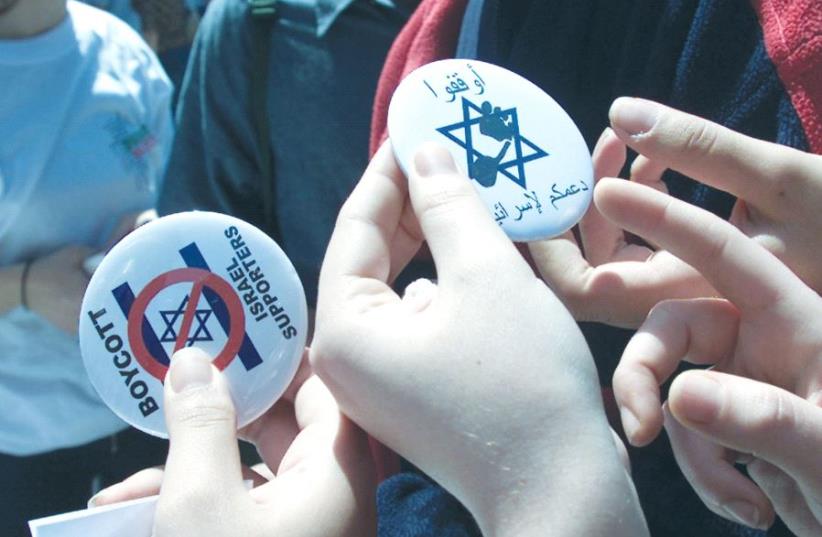 LEBANESE STUDENTS hand out buttons encouraging a boycott of Israel.
(photo credit: REUTERS)
Advertisement
The Boycott, Divestment and Sanctions (BDS) movement targeting Israeli companies, cultural and academic institutions finds fertile ground on North American university campuses. The phenomenon of BDS on campus often follows a pattern: 1. Student union formally adopts the BDS platform. 2. Student council attempts to pressure university governance boards and pension plans to cede to the BDS platform. 3. University administration typically rejects the nonsense – not because Middle East politics have no place on university campuses, but rather because the movement itself is deeply flawed in both its tactics and aim.Academic boycotts are incongruent with the academic mission of a university, which at their core are meant to foster a diversity of intellectual pursuits.Investments are typically managed by third-party fiduciaries, with minimal input from university governance. Most importantly, BDS is deeply flawed because its singling out of just Israel for alleged human rights violations is often accompanied by a wave of antisemitic activities on campus.This past year the student council at Kings University College, an affiliate of Western University, sought to adopt a formal endorsement of the BDS movement.I, along with a few other concerned students, challenged the referendum at the student council’s appeals board. Citing the council’s own equity policies, and highlighting the association between BDS and antisemitism, the appeals board unanimously ruled that a BDS referendum should not happen. The council eschewed this ruling and went ahead with the referendum anyways. When the referendum failed to reach quorum, the council at its annual general meeting ratified a watered-down BDS proposal.On the one hand, this deliberate disregard for democratic institutions, even at the student level, is concerning; these are the “leaders of tomorrow” ignoring Civics 101. More importantly, however, this episode is indicative of the way in which the concerns of Jewish students are often totally ignored when it comes to BDS.In this day and age social justice-oriented campus outrage seems to be front and center. On an average day an individual cannot scroll through their twitter feed without seeing some controversy brewing on campus. On most occasions, reactions to issues of racism and inclusion more broadly are absolutely justified.However, on other occasions – occasions that seem to occupy a significant amount of public attention – we see a mildly controversial speaker, culturally appropriated yoga, or a bad tweet from a campus café generate an inordinate amount of outrage. Yet, even in those situations, the concerns are taken seriously by both university administrations and by student councils.How are Jewish students concerned about BDS supposed to feel when a campus speaker, yoga, or a tweet seem to get more attention than genuine concerns over student councils adopting formal stances on BDS, which often leads to real antisemitism? What other cause on campus needs to present formal evidence to an appeals board, and win that appeal, only to have the result ignored, which is exactly what happens when it comes to Jewish students? What other social justice cause on campus would have a failure of a referendum ignored, and adopted at a subsequent meeting, which is exactly what happens when it comes to Jewish students? The answer is none.This whole incident is an indictment of poor leadership at one student council. However, it is an indication of how the concerns of Jewish students are treated more generally when it comes to BDS on campus.Quite frankly, something has got to give.The author is a law student and former student council president at Western University.